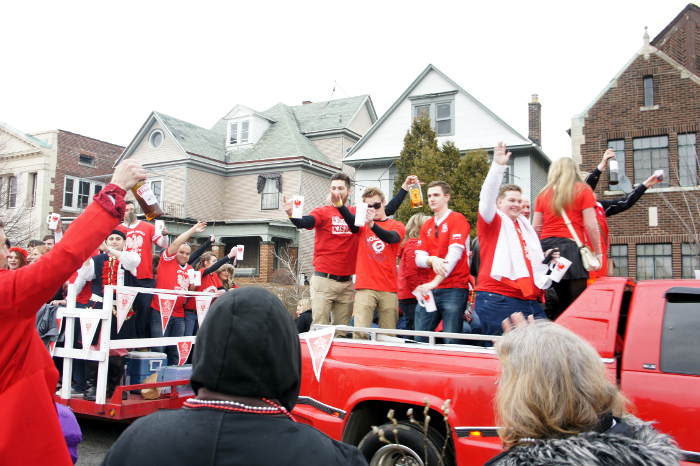 Grab your Polish gear and a pussy willow or two! The 10th Annual Dyngus Day Parade is here and it’s time to leave work early to spread good cheer. Here’s everything you need to know about the parade.

Dyngus Day always falls on the Monday after Easter. This year it’s on Monday, March 28th.

When does the parade start?

Where are the best spots to watch the parade?

The Pussywillow Park Party Tent on Memorial Drive, The Broadway Market on Broadway, and St. Stanislaus Social Center on Peckham according to dyngusday.com.

What can I expect at the Dyngus Day Parade?

“In the case of the Annual Dyngus Day Parade, here in Buffalo’s Historic Polonia District, it’s more of a demonstration in civic and ethnic pride. Unlike any other event in recent memory, this parade gathers people together with a sense of camaraderie and joy mixed with nostalgia and hope. An acknowledgement of who they are, where they came from and where they want to go. What started out as a rag tag group of passionate Poles with a few flags, a couple of pickup trucks and a band on a trailer, has turned into a big splash of Polish pride surfing a sea of red and white. Floats resembling medieval ships, fire trucks with sirens blazing and hoses squirting, polka bands blaring and families sharing memories and laughter as they stroll through the neighborhood tossing candy and beads to the little urchins gathered on the curbs.” – Dyngusday.com
Also, you WILL get wet. Just saying.

What should I wear?

Dress for the weather, wear comfy shoes, and wear something that you don’t mind getting wet/spilled on! Also, wear red of course.

Where there be food for purchase?

Yes, there will be food trucks at “Food Truck Alley” in Pussy Willow Park, which is in front of the Central Terminal, which is the end of the parade route.