GUITAR: One of the Coolest Exhibits to Hit Buffalo in a Long Time

You rock. Your family rocks. Why not rock out this weekend? 😉
The weather is iffy at best, the kids probably bouncing off the walls, and the Buffalo Museum of Science is currently star studded with the addition of a new exhibit called GUITAR: The Instrument That Rocked The World. And it’s only in town from Saturday, January 21 to Sunday, May 7.
Probably the coolest thing to hit the Buffalo science scene since Bodyworlds, this new exhibit allows you to explore the guitar, a compelling American icon, through the powerful lens of culture *and* science. It’s a twofer. How cool is that?
As you wander through the exhibit (which we got a sneak peek of during setup last week) you’ll encounter a variety of guitars including one of the first six-strings ever made from when Thomas Jefferson was President in 1806 and the Rickenbacker or “Frying Pan”, AKA the first production model electric guitar ever made. 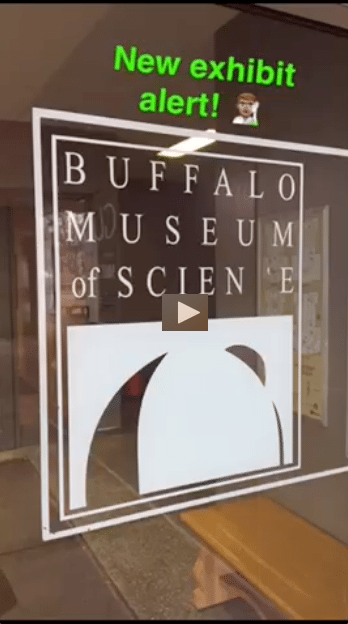 During our sneak peek we also ran into an exploded acoustic guitar (for learning purposes, guys), and the coolest instruments in the collection in our opinion – BB King’s guitar Lucille, and a guitar that belonged to Tony Iommi from Black Sabbath. Of course, you’ll also get the chance to check out / play the world’s largest playable electric guitar too. No seriously it’s 43.5 feet long and is Guinness Record-breaking. Boom.
In it’s entirety the exhibit features 60 guitars on display and dozens of interactives, so as you can see we’ve only begun to scratch the surface of the musical journey you’re about to take.
Experience diverse genres of music? Check! Discover the science of pitch and tone? Check! Learn how the selection of materials and strings fused with electromagnetism and amplification to create an elaborate device that has revolutionized music? Check! Okay, that last one might take a while to nail, but we believe in you.

While you’re there, make sure to stop by the Buffalo Museum of Science’s home-grown exhibit in collaboration with the Buffalo Music Hall of Fame called 71Picks. If you’re into Buffalo stuff like we are, you’ll love the fact that it features artifacts from local music heroes.
Seriously thinking about checking out this bad boy exhibit? Good call. GUITAR, presented by M&T Bank with Associate Sponsor Chakra Communications, is free with admission and while it’s open during regular museum hours, there will also be extended hours every Wednesday and select Fridays. For more info go to sciencebuff.org!