Have a Pie and a Pint at the New Pitch Bar

Kids chase a ball around a large soccer pitch. Mums and dads sit on blankets in a field and sip amber-hued pints of beer. The sound of a Chelsea-Everton match rings out from a nearby telly as the scent of a freshly prepared Dubliner pie wafts through the air.

That might sound like a scene from the English countryside, but it’s actually coming to South Buffalo this fall in the form of Damien and Vicky Parker’s new food, hospitality, sport and drink complex by the Buffalo River. Currently just the site of a British piemaking factory and an attached fish-and-chips shop, the new complex is slated to feature an English-themed sports pub, beer garden, international-sized soccer pitch with tiered seating and a ‘glamour’ burger joint – featuring European-style burgers.

The complex is part of a complete rebranding effort by the English immigrant couple. What started as the English Pork Pie Company and British Chippy will now fall under the masterbrand of Parker’s – a Buffalo-based and -influenced British hospitality company.

In a recent sit-down interview at the bustling facility, Damien Parker told me he sees a few things lacking in both the city and larger Western New York area’s restaurant scene. Namely, a proper English hospitality experience – catered to American tastes. [sc:Centerpost-1-700-150 ]

“By turning the English Pork Pie Company into what’s going to be an institution, we’re creating something that’s hopefully going to stand the test of time,” he said.

The centerpiece of the campus, which sits directly across from what will be Solar City, is the Pitch Bar – a soccer – and rugby-themed sports bar. While there are a few bars that service the WNY’s growing professional soccer fanbase – none truly provide the authentic pie-and-a-pint experience common to fan culture on the British Isles.

The Pitch Bar will feature beer from local brewers and Parker said he plans to provide beer brewed in-house with the traditional open fermentation method, a process that dates back to the Middle Ages. The pub will also feature fish, chips, pies and all the other menu items currently available at the British Chippy.

Parker emphasized that people with Irish and English heritage will be able to come to the Pitch Bar and carry on weekend traditions from the ‘old country’.

“This is how your ancestors enjoyed the game, with a pie and a pint,” he said.

The Parkers started the English Pork Pie Company as a way to service British ex-pats looking for a taste of home who didn’t want to pay all the costs associated with shipping pies across the Atlantic. However, launching the British Chippy opened the couple’s eyes to an American consumer hungry for a taste of authentic English food.

“Before we did the fish and chip shop, our business was about 80 percent UK,” Damien said. “Now, it’s about 95 percent American-based. Broadening out into new avenues like this (new complex) will obviously have a much wider appeal to a lot of people.”

With young kids of their own, the Parkers also saw the need for a place where families can come and spend an afternoon together. The space behind the Pitch Bar will have a beer garden for adults to relax, but also an international-sized soccer pitch for kids to run around on or kick a ball. 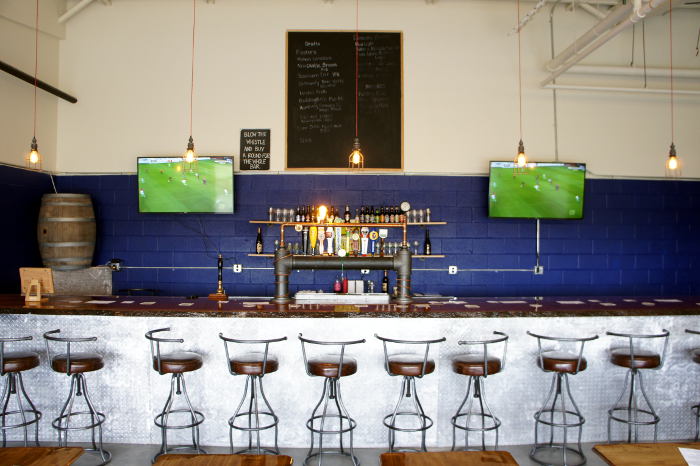 “In the UK, you go to the pub and your kids come with you: They sit on a stool, have a lemonade and a packet of crisps,” Parker said. “We think there’s a need for younger professionals with children or just families where you can come and actually socialize at a kid-friendly place. There’s a lot of new places open but there not really kid-friendly. That’s why we’re building an international-sized soccer field – so kids can come here and tear ass up.”

Despite all the activity going on in downtown Buffalo, Damien Parker said he and his wife felt there’s no better place to set up the facility they were envisioning than South Buffalo.

“We want to put South Buffalo on the map as a destination place: somewhere you can come and hang out, watch a game, let your kids play, have a kick around on the soccer field and enjoy fine food and good beer at the same time,” he said.

The location of the Parkers complex is right near the Buffalo River, just past The Valley coming from downtown. From the soccer pitch, you can see the tall buildings downtown, Silo City, Solar City, the Larkin Building and even the occasional ship floating by on the nearby river. It’s the ideal setting for a pie, a pint and supporting your favorite team (#ComeonChelsea).

“This is going to be a massively developed area in the next 24 month,” Parker said. “So we’re just trying to build out our campus to facilitate that, but also benefit the local community at the same time.”

The Pitch Bar at Parker’s Complex

Brett Llenos Smith is a freelance writer based in Buffalo’s Allentown neighborhood who has been covering local food and culture for Step Out Buffalo over the past six years. As someone with a multi-ethnic background, he has a passion for exploring and understand the many diverse corners of Western New York.
Find More ➭ South Buffalo
×