Imagine, if you will, living in a city situated along the Mediterranean Sea.
Your weekday mornings are highlighted by walking into a café on the way to work, picking up some espresso and fresh baked goods and maybe grabbing something for your co-workers. After work, you pop back into the very same café for a glass of wine, or a digestif, and a few small bites before heading home for family time and a late dinner.
It’s this casual joie de vivre that Peter and Johnny Eid are trying to bring to the suit-clad downtown workers and theater crowd with their new Mediterranean-style café, Hearth + Press. 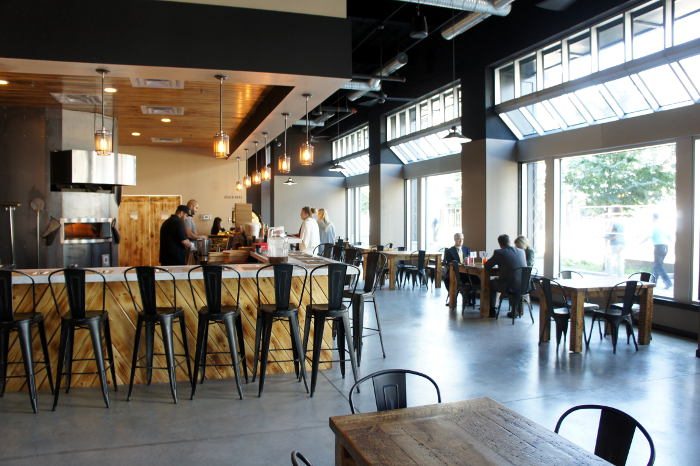 While operating Mezza on Elmwood Avenue for the past five years, the brothers had longed to open up a Mediterranean-style café in Buffalo, and seeing a newly-burgeoning Main Street in downtown as well as an available space, the brothers seized the moment and made their vision a reality.
Hearth + Press is a modern-looking eatery with minimalist décor and soft alt-rock hummed away in the background during my recent visit. Upon entering guests will wait in line, order at the counter, then grab a seat. The café’s centerpiece, both figuratively and literally, is its towering industrial pizza oven. The oven is capable of generating temperatures hotter than 1000 degrees Fahrenheit and what that kind of heat does to a pizza is something extraordinary.

“When the high heat hits the dough that fast, it rises differently,” Johnny Eid told me as I sat at the café’s marble-topped bar. “So you get that nice big, fluffy, extremely-light textured pizza. The pizza looks big – its 11 inches around and it’s got crust a couple inches thick – but you could take the whole thing down and you’ll still feel great.”
The margherita pizza I was offered came out looking like a map of savory deliciousness, with prefectures of cheese, rivers of tomato sauce, foothills of caramelized cheese and sprawling cities of basil. The toppings were ringed by a thin dark crust – a hallmark of true Neapolitan-style pizza and not the result of being cooked “too long,” as one local reviewer has put it, I was told emphatically.
Biting into the extremely-thin crust pizza revealed the dough was softly chewy with a hint of crunch. The cheese was perfectly melted by the behemoth oven, its liquefied milk fat released and welded to the sauce, which had still retained its fresh, acidic tomato-y tang.  While the sauce looked a bit runny, nary a drop spilled on my plate.
Made with premium “00” flour, the pizza crust was light, and thin as a crepe but perfectly filling, tasting both nutty and creamy. Biting into the crispy basil leaves offered the occasional punctuation of herbal anise notes. Despite the scorching heat, the basil had retained most of the flavor of a fresh-picked leaf.
Priced appropriately at $12, a whole pizza might be a bit too much for the diner feeling just a bit peckish. 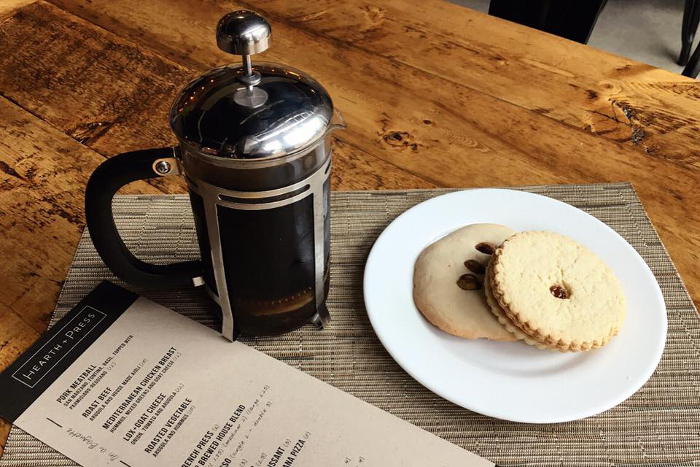 The other headliner at Hearth + Press is the French press coffee made with an exclusive house roast comprised of 5 percent Kenyan, 5 percent Kona and 90 percent Guatemalan dark roast. Available both hot and cold-pressed, the coffee is also used to make big-batch cocktails that a party can share.
With a full bar and rotating wine list emphasizing reds from Italy and white from California, the café’s has a wide range of drinks one could quaff whilst unwinding from the day or getting ready to see a show.

An impressive array of food and drink offerings, a gorgeous modern space and chill music playing in the background all adds up to a little slice of the Mediterranean lifestyle, sitting right on Main Street in downtown Buffalo.
“It’s not the usual pace that we in Buffalo are on,” Johnny Eid said, describing his new café. “It’s a little getaway.”
“Change up the scenery. Change up the vibe,” he suggested. “Sit down, relax and enjoy yourself and enjoy some really good pizza.”
For more info go to hearthandpress.com and follow Hearth + Press on Facebook and Instagram.

Buffalo Named One Of The Best Cities For Beer Drinkers

16 of the Best Beer Bars in Western New York

Your Ultimate Guide to Irish Pubs Around WNY

10 Excellent Places to Get Your Irish Food Fix