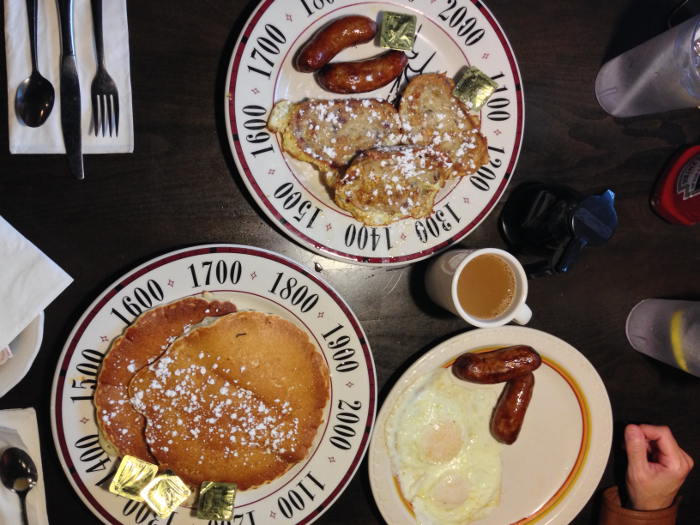 There are times in every person’s life when they *need* a 24-hour diner. Maybe you’re coming home from a crazy Saturday night and nothing sounds better than home fries, maybe you have a 7am flight and want something to eat that isn’t McDonald’s, or maybe you just have a hankering for some good ol’ fashioned diner food. Whatever your reasons may be, say hello to Hillview Restaurant. While the outside of the Hillview Restaurant isn’t the most breathtaking sight you’ve ever seen, mama always told us it’s what’s on the inside that counts. And we mean that both in terms of the inside of this restaurant and also in terms of the inside of our stomachs after we’ve finished eating. 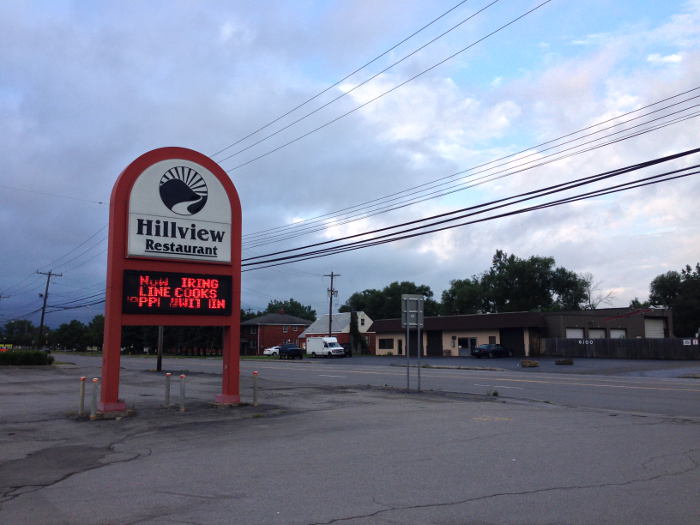 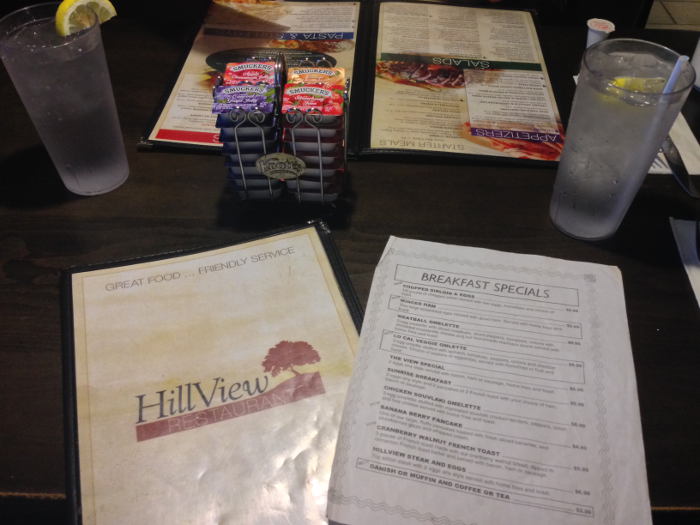 If you’re one of the aforementioned people coming home from a crazy Saturday night, with a 7am flight (Hillview is near the Buffalo Airport)/open boycott of McDonald’s, or who has a hankering for some good ol’ fashioned diner food then you will appreciate Hillview Restaurant. When you enter the restaurant it’s exceptionally clean and pretty fancy looking for a diner, which ups the ante a bit and is something you probably won’t find at your old college late night/hangover hangout. The menu here is huge and reflective of what you’d find at most diners, but it’s the way it’s made that makes it worth the visit. There’s definitely something for everyone at Hillview Restaurant –even our pickiest eating companions- and they have some drool-worthy items on their menu like the Greek House Burger ($8.99) and Cheese Blintzes ($7.49). We say check it out, relive your glory days, and get your diner-on in style…minus the frat guy puking in the corner. 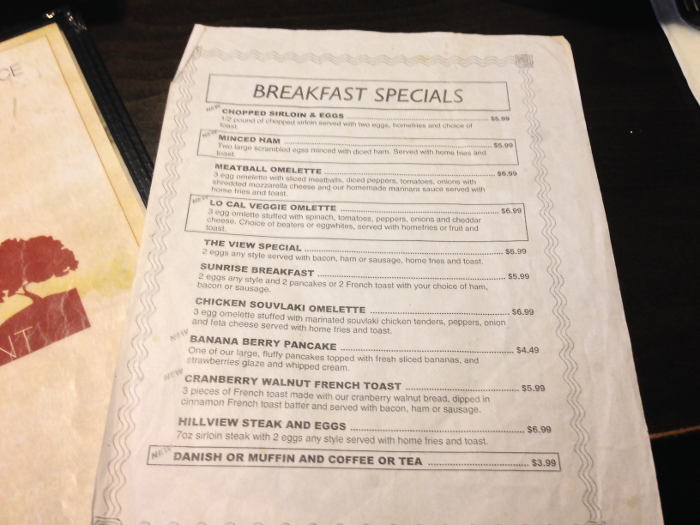 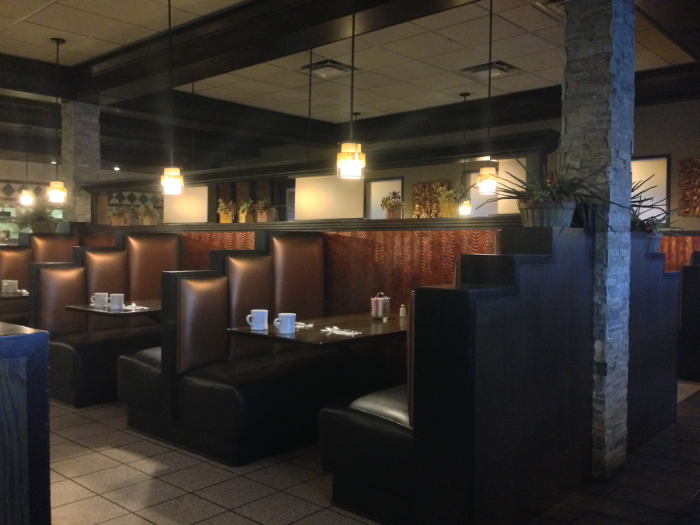 The official categories of the menu are as follows: Appetizers, Starter Meals, Salads, Entrees, Lighter Fare, Pasta & Stir Fry’s, Specialty Sandwiches, Triple Decker Clubs, Roll-Ups (aka wraps), Subs, Burgers, “Good Morning” (aka breakfast combos), Steak & Eggs, Eggs & More, International Omelets, Pancakes, Waffles, & French Toast, and then of course your Sides, Beverages, and Desserts. At Hillview their menu boasts that everything is “made fresh to order” and they feature different specials each day like their Meatball Omelette ($6.99) and Banana Berry Pancakes ($4.49). Did we mention almost everything on the menu is under $10? Almost everything on the menu is under $10.

One lovely morning when I had a 7am flight I found myself driving around with my mom trying to find somewhere to eat. Our conditions for finding a place to eat were simple: somewhere that was near the airport, somewhere that was not fast food, and somewhere that was good. Minutes later, we found ourselves at Hillview Restaurant. It was 5:30am on a Wednesday and we didn’t know what to expect. On the outside the building was large and (for lack of a better term) basic looking, with a scrolling light-up sign and white-washed walls. But once we entered Hillview Restaurant we were in the middle of a modern, bright, clean, and…pretty beautiful TBH eatery. My mom even said “I thought this was supposed to be a diner?” to me after we were seated because it is that un-diner looking. 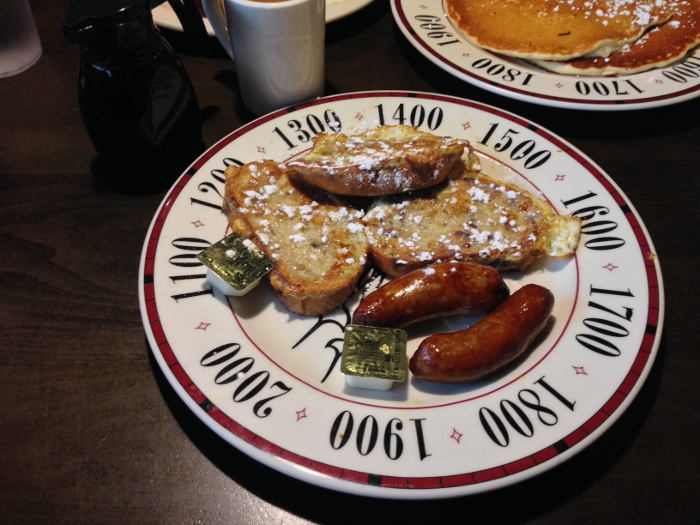 The menu was ginormous so we asked the waitress what her favorite items were and went with those. We ended up ordering the Sunrise Breakfast with 2 eggs any style, 2 pancakes (though we also had the option of French toast), and a side of sausage (other options were bacon and ham) for $5.99 and Cranberry Walnut French Toast which came with 3 pieces of French toast made with their cranberry walnut bread dipped in cinnamon French toast batter and a side of sausage (other options were also bacon and ham) for just $5.99. Side note: We also ordered coffee and chocolate milk, which was pretty tasty and also they didn’t judge me for ordering chocolate milk #winning. Both breakfast platters were huge; the pancakes were larger than my head and the French toast was so thick it might as well have been 6 slices stacked on top of each other. The Cranberry Walnut French Toast was honestly one of the best French toasts I’ve ever had… and it was $5.99!!!!!! No amount of exclamation points can ever fully express how exciting and delicious it was so you’ll just need to taste for yourself.

Our only regrets were that we didn’t wake more people up to come feast with us because then we could have tried more food. The Banana Berry Pancakes in particular are on my list for the next time I’m craving some down-home diner food, and we hear their rotating pie selection is worth the trip alone. If I wasn’t about to board a flight that day rest assured we would have stayed until our second wind and indulged in the goodies behind that glass pie-case.

Lauren is the Creative Marketing Director at Step Out Buffalo aka the person who posts all those memes on social. A lover of Buffalo, food, travel, and animals, she can usually be found trying different local restaurants while planning her next adventure and asking passersby if she can pet their dog. Follow her dog-petting adventures on Instagram @laurenspoth
Find More ➭ Cheektowaga East, Depew