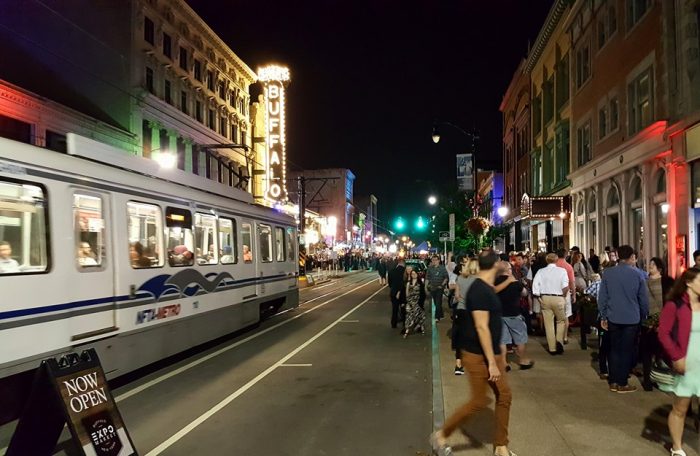 The holidays are officially here, Western New York! Buffalo’s Theatre Distric is about to be bustling with tons of activities, special events, performances and festive celebrations during the next few weeks, and we’re here to make sure you’re aware of all of it. Here’s a list of holiday happenings around the Theatre District between now and the New Year:

The New Phoenix Theatre on the Park will present Cinderella, a show conceived and directed by Kelli Bocock-Natale, through December 16th. Cinderella is perfect for all ages to attend and a contemporary retelling of the fairy tale classic. The show stars Jamie Nablo, Alejandro Gomez, Daniel Williams, Sean Murphy, Michael Wachowiak and Buffalo favorites Ray Boucher, Caitlin Coleman and Eric Rawski. More information is available at newphoenixtheatre.org.

Shea’s 710 Theatre will host It’s A Wonderful Life: A Live Radio Play, a show presented by Shea’s Performing Arts Center and Road Less Traveled Productions. This show was adapted by Joe Landry, will be produced by Road Less Traveled Productions and directed by John Hurley. Spend a little time in Bedford Falls this holiday season by being a part of the studio audience at WBFR’s 1946 Christmas Eve radio broadcast of It’s a Wonderful Life (based on the Frank Capra movie). Five actors and a foley artist perform all the voices, music, singing, and sound effects from the most beloved Christmas movie of all time: the story of George Bailey, a young dreamer who will mortgage his last dream for the smaller hopes and needs of his neighbors and friends, and Clarence, George’s 292-year-old guardian angel who will help him discover that “no man is a failure who has friends.” More information is available at sheas.org.

This show will be held Shea’s Smith Theatre, presented by Shea’s Performing Arts Center and O’Connell & Company Productions. In a festive mood, the ladies of the Farndale Avenue Housing Estate Townswomen’s Guild Dramatic Society mount another assault on the classics with their stage version of A Christmas Carol. They enthusiastically portray a dizzying array of characters from the Dickensian favorite (and a few which aren’t), engineer some novel audience participation while bravely contending with an intrusive PA system and a real Farndale first rap their vocal cords and feet around two original, show stopping songs. More information is available at sheas.org/710main/.

Mannheim Steamroller Christmas by Chip Davis has been America’s favorite holiday tradition for over 30 years and returns to Shea’s Performing Arts Center on Friday, December 1st. Grammy Award winner Chip Davis has created a show that features the beloved Christmas music of Mannheim Steamroller along with dazzling multimedia effects performed in an intimate setting. Experience the magic as the spirit of the season comes alive with the signature sound of Mannheim Steamroller. Their holiday CDs have become synonymous with Christmas and continue to occupy top spots on Billboard’s Seasonal Charts every year! More information is available at sheas.org.

Saturday, December 2nd, Five Star Bank presents the 2017 Downtown Christmas Tree Lighting Celebration at Rotary Rink at Fountain Plaza. This annual event marks the official opening of the free ice-skating season in Downtown Buffalo. The event begins at 5pm with free ice-skating and caroling from students at Iroquois High School. At 6pm, Buffalo Place and Five Star Bank representatives, as well as local elected officials, countdown the lighting of the tree and fireworks display over Fountain Plaza. Immediately following the fireworks and tree lighting, the fun will continue with visits with Santa, free rides on the kiddie Merry-Go-Round and Ferris Wheel, holiday gifts, and more. Duke’s Doughnuts will be on-site with hot, freshly made doughnuts available for purchase. Ice-skating is free and ice-skate rental is available; $2 for children and $3 for adults. Guests are encouraged to bring their own ice-skates and avoid waiting in the ice-skate rental line. Santa will visit with children from 6:30 p.m. to 8:00 p.m. More information is available at buffaloplace.com/treelighting.

Shea’s Performing Arts Center continues the 2017-18 Free Family Film Series with a screening of the original 1947 film version of Miracle on 34th Street. In this Christmas classic, an old man going by the name of Kris Kringle (Edmund Gwenn) fills in as Santa in Macy’s annual Thanksgiving Day parade. Kringle proves to be such a hit that he is soon appearing regularly at the chain’s main store in midtown Manhattan. When Kringle surprises customers and employees alike by claiming that he really is Santa Claus, it leads to a court case to determine his mental health and, more importantly, his authenticity. Doors open at 12noon and the film will begin at 2pm. Children are welcome to join in the fun, meet Santa Claus and explore the decorated theatre before the film begins. More information is available at sheas.org.

Beginning December 8th, Alleyway Theatre will present the 35th year of A Christmas Carol by Charles Dickens, adapted by Neal Radice. Mr. Radice will direct this winter classic, which will be the company’s second production of its 38th season dedicated to presenting new plays and musicals. The Alleyway production A Christmas Carol is the fifth longest running annual production in the country and one of Western New York’s favorite holiday traditions, playing to over 100,000 people during the past three and a half decades. Multiple generations of families attend each year, typically arriving early so as not to miss a note of the traditional carolers as they perform in the half hour before Dickens’ famous ghost story of Christmas begins. Younger audience members in the intimate 99 seat Alleyway Theatre never fail to let out a squeal as the ghost of Jacob Marley, rattling his chains, appears in a red glow rising up through the floor of old Scrooge’s bedchamber. Only six actors have played the role of Ebenezer Scrooge during the 35 year run of Alleyway’s annual sell-out. Veteran actor David C. Mitchell will step into the role of the old miser once again. Mr. Mitchell is well known to Alleyway audiences. He has been featured in a number of Alleyway productions over the past decade and, for the past ten seasons, has appeared in A Christmas Carol in the multiple roles of Jacob Marley, Topper and Old Joe. Active in theatre for over 30 years, Mr. Mitchell has performed in numerous plays, commercials, videos, and films while living in Buffalo, Virginia Beach, and New York City. Sets and lighting for A Christmas Carol will be created by Neal Radice with costumes by Artie winning costume designer Joyce Stilson. More information is available at alleyway.com.

More than 90 million people around the world have experienced the phenomenon of Disney’s The Lion King, and now you can, too, when Western New York’s best-loved musical returns to Shea’s Buffalo Theatre. Winner of six Tony Awards®, including Best Musical, this landmark musical event brings together one of the most imaginative creative teams on Broadway. Tony Award®-winning director Julie Taymor brings to life a story filled with hope and adventure set against an amazing backdrop of stunning visuals. The Lion King also features some of Broadway’s most recognizable music, crafted by Tony Award®-winning artists Elton John and Tim Rice. More information is available at sheas.org.

Tags from the story
Sponsored Content Step Out College
0
Facebook Twitter Pinterest
LinkedIn Email
Written By
the blonderooster
More from the blonderooster
BreadHive recently had their grand opening, so we wanted to catch up...
Read More

Located in the previously Rue Franklin location. We are specialized in making seafood boil with special house sauces with different spice level…
.
Change Location
To find awesome listings near you!