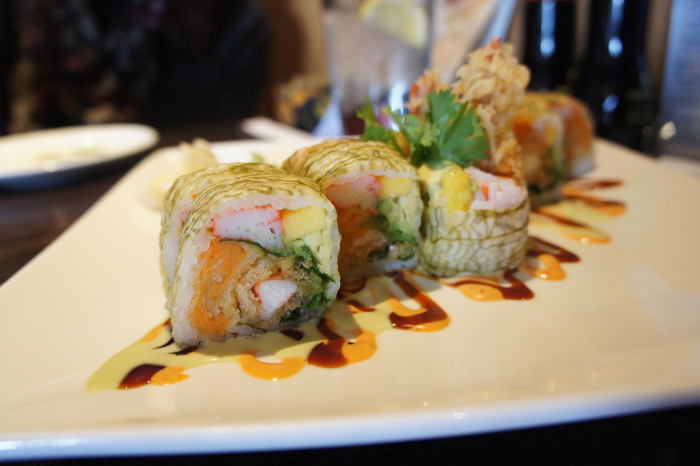 You don’t go willingly to your first sushi bar experience. Whether it’s by a group of friends or date trying to make a good impression, you’re typically dragged there – mentally kicking and screaming.

“I’m going to be eating raw fish. Raw fish!” you think to yourself over and over.

For some of you, this scenario is all too familiar. For others, it’s in your future. Embrace it now.

Let’s kick off this sushi primer getting one thing out of the way. Sushi does not mean raw fish. The word actually refers to the sweet and sour rice served with a range of vegetables and meats, including raw fish.

Obviously, if you don’t like seafood, and supple food textures make you squeamish – sushi just isn’t going to be your thing. But, say you like calamari, that’s a good first step.

Some reasons to go

There are a lot of great reasons to start going out for sushi. Eating at a sushi restaurant is its own unique dining experience and that alone can be enough to bring you back. Also, sushi is generally a pretty light meal. Because it’s made of mostly seafood and rice, you can eat a good amount of it and not walk out feeling like you’ve been hit square in the belly with a gut bomb.

Finally, sitting at the sushi bar is a great place to really appreciate the food and art form that goes into preparing it. It’s also the best way to learn about all the different rolls and pieces.

When you pick up a sushi menu, you’ll notice that there are three basic categories:

Maki  (rolls) – rice and other fillings rolled up with seaweed

Sashimi – raw fish all by itself 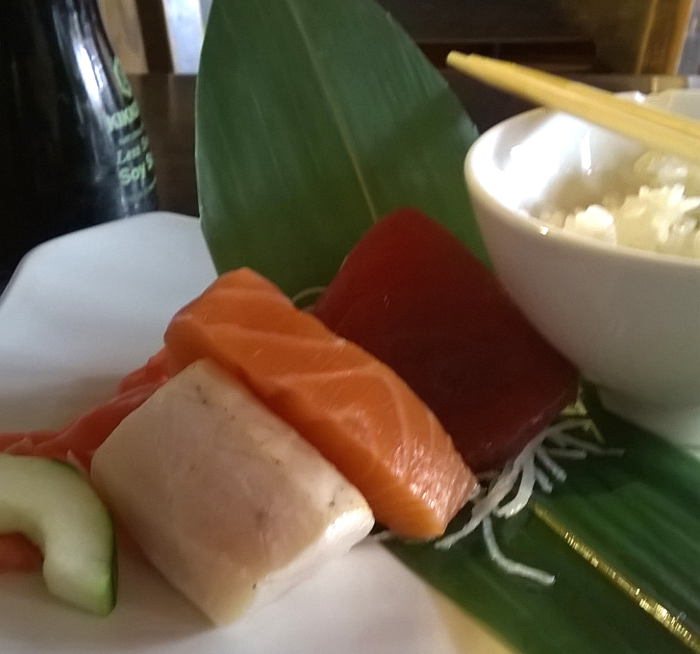 If it’s your first time, stick with the rolls. American-style rolls like the California roll or Philadelphia roll are popular in this country for a reason – their flavors are often very familiar. At SeaBar for example, the BBQ salmon roll has salmon and barbecue sauce. The Lobster roll at Encore might look foreign, but its sautéed lobster tail, goat cheese and red pepper should taste pretty familiar. 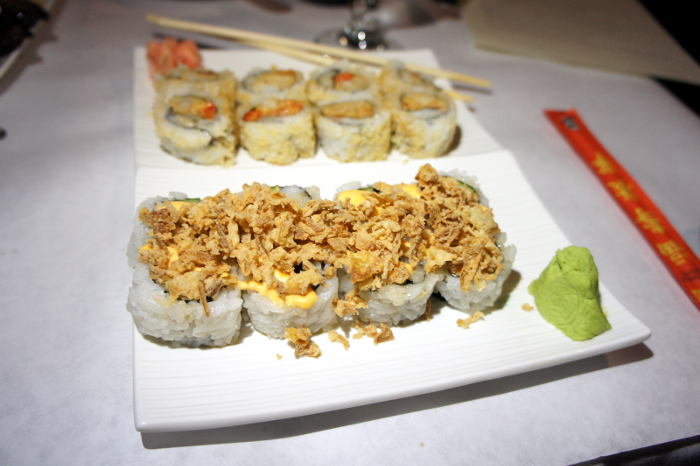 The rolls at American sushi restaurants are made with newbies in mind, so just check with your server to ensure that there’s no raw fish.

Two rolls will do if you’re peckish. Three rolls approaches a modest lunch. Order four rolls and you’re getting closer to an actual meal. If you’re ordering nigiri, they come as single-bite pieces, so you’ll have to order a lot to get your fill that way. Feel free to order a few things, figure out what you like than order more of your favs.

When the sushi arrives, or maybe a bit before, you’ll be provided with wasabi, pickled ginger, soy sauce, chopsticks and a small dish. If you’re not confident about your chopstick skills – it’s perfectly acceptable to eat sushi with your bare hands.

First, fill the small dish with soy sauce. Don’t overfill the dish because it can splash around when you’re dunking sushi into it. Some people mix in their wasabi with the soy sauce, but don’t do it. That’s a rookie move (more on that later).

Many American-style rolls come drizzled with sauce or fully flavored so a quick dunk in the soy sauce is all you really need for something with barbecue sauce or cream cheese in it.

However, if you went with a raw fish roll like tuna or salmon or a nigiri – start by taking a tiny bit of wasabi and putting it on your roll or piece or raw fish. Next, dunk the roll or piece in the soy sauce. If its nigiri, dunk it fish-side down to prevent too much soy sauce from getting absorbed by the rice. 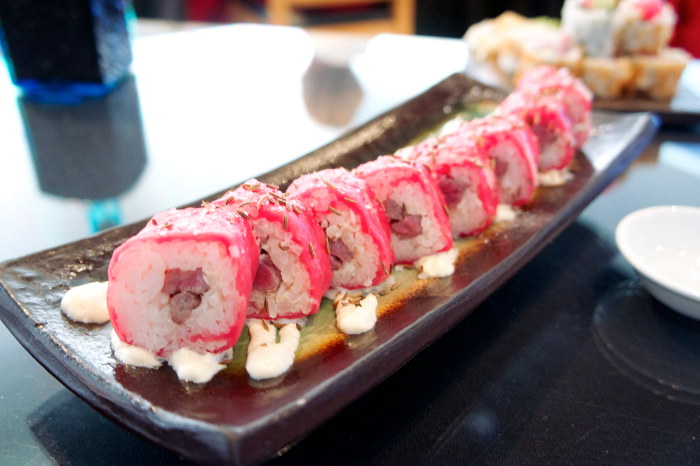 Beef on Weck Roll at Seabar

Here’s where things get tricky. I like to pop the entire thing in my mouth. Biting a piece or roll in half usually ends in disaster, but if you’re going to do it – you must bite with the same mentality as someone walking through Times Square: quickly and decisively with a destination in mind. Even then you could end up with a shirt full of rice and soy sauce.

When you put the sushi in your mouth, you should notice waves of flavors coming at you. The saltiness of the soy sauce. The sweet-and-sour of the sushi rice. The spiciness of the wasabi. The meaty umami and buttery-ness of the fish. If you mix your wasabi and soy sauce, you won’t get those two flavors as separate waves, by the way.

After each roll, it’s good to take a sip of sake or wine. The pickled ginger is also there to cleanse the palate and prime the taste buds for the next delicious piece. 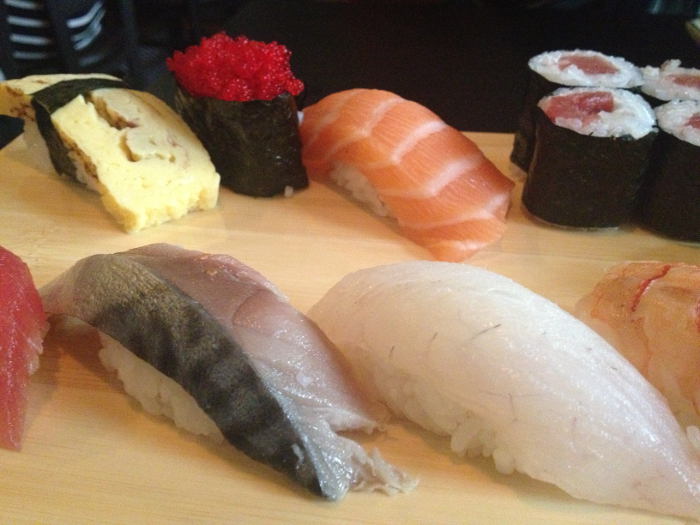 A word on sushi etiquette

I realize this is Buffalo, New York, US of A – and dining etiquette can be seen as a bit snobbish ‘round here, but like I said before, dining at a sushi restaurant is about the experience. Following a few simple etiquette rules plays into that experience and really enhances your meal.

If you or someone in your party orders a bottle of sake for the table, proper etiquette says you should not fill your own cup. Also, don’t ‘shoot’ sake. It’s like doing a shot of wine or beer. It’s also not good decorum to get trashed in a sushi restaurant.

Don’t ever put chopsticks straight up in any bowl of rice. This represents death in Asian cultures and is generally frowned upon. Also, don’t pass food from chopsticks to chopsticks for some reason.

Like many things in this ‘How to’ series, its best to go in to a sushi restaurant with an open mind and relaxed attitude. Ask questions and let the staff show you the way.

More ‘How to’ posts…

Brett Llenos Smith is a freelance writer based in Buffalo’s Allentown neighborhood who has been covering local food and culture for Step Out Buffalo over the past six years. As someone with a multi-ethnic background, he has a passion for exploring and understand the many diverse corners of Western New York.
Find More ➭ How To: Dining Trends
×