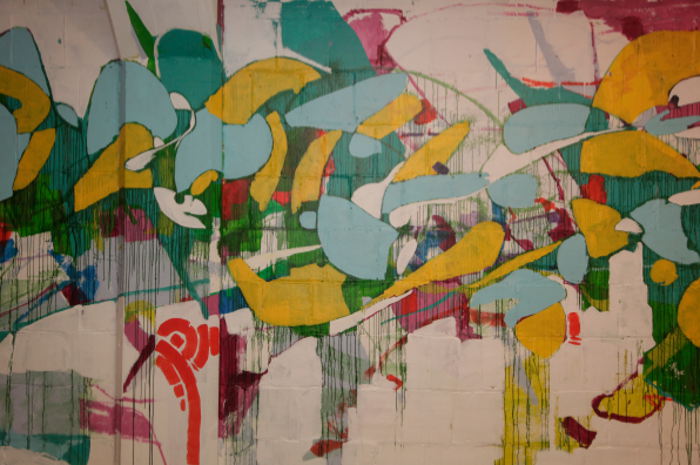 For his MFA thesis show, Cyclic Succession, artist Nate Hodge wants you to literally step into a painting.

For the exhibition, which opens Friday April 10, Hodge is creating an encompassing piece of art by covering the walls, pillars and floor of the Hi-Temp Gallery space with colors and shapes. The exhibition is supposed to be temporary and this very temporal aspect informs work itself.

On a recent visit to check out his progress, Hodge told me that visitors should walk around the exhibit, set in an old cold-storage space, and get different views as they travel around the room.

“The pillars do a nice job of segmenting off different areas, and when you walk around, your focus is on different spots,” he said. “So you’ll be able to see different things that you didn’t see from other angles.”

“There’s no one focal point that you have to walk around,” he added. 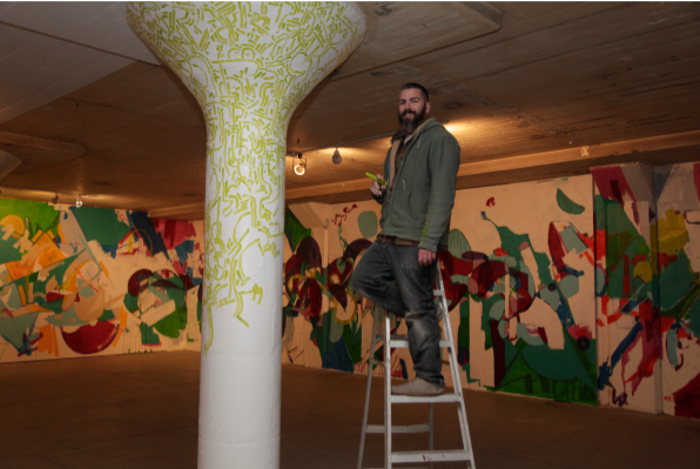 When I saw the half-finished installation, it was readily apparent that Hodge’s painting is heavily influenced by graffiti and street art. In addition to being influenced by the futurists of the early 20th century, he said he draws specific inspiration from contemporary street artists in South America and Europe.

“The street painting movement in Brazil; all of their stuff is really great. It’s so colorful,” he said. “They use lots of rollers and some spray paint. But a lot of it is done with these really tiny rollers.”

“Then there’s another group called ‘graffuturism,’ where it’s real splashy and experimental,” he added. “Where (the graffiti) is no longer letter form, it’s trying to capture the movement in a space.”

In his artist’s statement, Hodge said he actively tries to consider the dynamics of a space as he’s creating the painting.

“When I think about painting I like to think of a painting’s surface as a landscape that has been subjected to a countless number of changes of varying size and magnitude,” the statement said. “Often the process begins with a focal point, a colonizing mark that spreads exponentially across the surface like an invading, alien organism.”

“In natural systems there is the tendency to move towards entropy, but found within this entropy are moments where beautiful and delicate forms develop before dissolving,” Hodge said.

The installation is set in the Hi-Temp Gallery space, located on the fourth floor of the Hi-Temp Fabrication building across Illinois Street from the First Niagara Center. Visitors to the exhibit will have to come in from Illinois Street and take the freight elevator up to the old warehousing space. As a setting, the 100+ year-old brick building makes for a striking contrast for such a brilliantly-colored and modern exhibition. 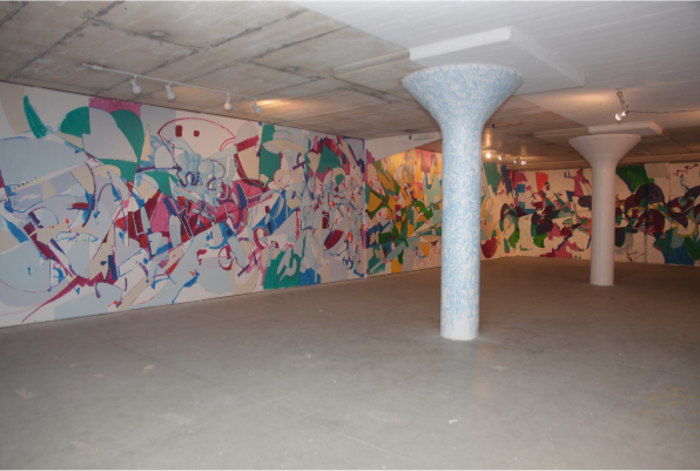 Hodge said he hopes people walk away from his show feeling like they’ve left an immersive experience, something that can only be felt by being there.

“You can draw up so many images on the computer, but you’re only seeing it visually,” Hodge said. “Here you’re going to be walking through a painting. It’s something you can’t quite capture on a phone or a single image. It’s something you have to actually walk though and experience to get the full feel of it.”