InnBuffalo Off Elmwood is celebrating their first anniversary as an inn, but the story of this glorious building starts long before 2015. Located at 619 Lafayette, InnBuffalo was originally one of Buffalo’s many mega mansions, built circa 1900. This marvelous nine-suite inn has been, and is being, restored by owners Joe and Ellen Lettieri who bought it at a city auction in 2011. Since opening for guests in 2015, InnBuffalo Off Elmwood has quickly become one of Western New York’s premier hotels. With a #1 ranking on Tripadvisor, room at the inn, and likely the very reasonable rates, might be tough to find down the road. Today it’s still a bit of a “hidden” gem. That means get in while the gettin’ is good.
Although InnBuffalo Off Elmwood is a great place to hang your hat, if even for one night, the experience is so much more – picture Somewhere in Time with Christopher Reeve and Jane Seymour minus the theatrics and sketchy acting.
As you climb onto the grand front porch you can feel the daily worries and stress of life dissolve into another century. You’ll want to grab a good seat to while away the day, listen to the birds, watch riders flow by, and perhaps grab a cold libation. (It might be best to check in first.)
Continue on through the front entrance and time continues to tick backwards to 1901. You’re immediately struck by the high ceilings, the stunning old-world wood work, the walls of original coverings, hand painted and stenciled artwork, windows of leaded and stained glass. My personal favs are the monster pocket doors.
As stated on their website, “During renovations, hand painted stenciling on the ceiling in the Music Room was uncovered. The Dining Room revealed a similar treatment, including stenciled walls.  Silk, damask wall covering in the drawing room revealed the outline of the original mantel. The library ceiling is gold leaf with a Persian inspired stencil. Plans are in place to restore and replicate these elements, but for now, these areas have been stabilized. Guests get the rare opportunity to see elements of the home which have remained untouched for 115 years.” 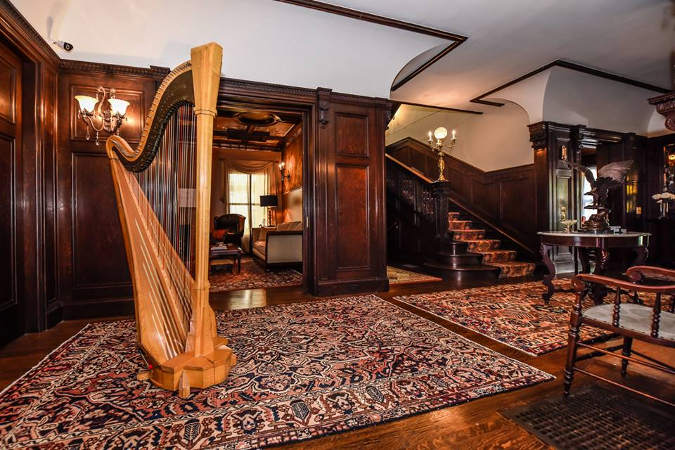 I’m tempted to give a room by room tour, but I don’t want to steal Joe’s thunder. He is clearly passionate about the home, and proud of what his family has been able to preserve for Buffalonians and visitors. He enthusiastically tours guests through the property while bragging about Buffalo – then and now. If you haven’t seen John Paget’s short film Buffalo: America’s Best Designed City he’ll suggest you sit down and do so immediately. The tour is worth the price of admission alone. No matter how many photos you see, Joe, and the in-person visuals, are impossible to recreate on paper or screen. Trust me when I say that pictures cannot do it justice.
All suites are beautifully appointed with full baths, heated marble floors, free WiFi, flatscreen televisions, individually controlled heating and AC, high quality linens, and Keurig coffee makers. Feel free to lounge in the spectacular common areas/room, the front porch, or the fully original tiled and stenciled basement “rathskelter”. In the morning join other guests at the breakfast table for a morning of pleasant conversation, coffee, juice and breakfast – included.
Located on Lafayette they are a quick walk from Elmwood Avenue shops and restaurants. A pretty easy walk to Hutch’s as well. Set among the stunning Elwood Village Victorian and Colonial homes either direction your walk will be a great chance to browse.
InnBuffalo Off Elmwood seems like it was built to be an inn, but it wasn’t. It was built to be the home of inventor and industrialist H. H. Hewitt. Hewitt married Miss Sarah Dutro in 1892 and moved to Buffalo in 1893 where he engaged in the construction and afterward in the management of the Union Car Co. He later founded the Hewitt Rubber Co., that employed some 700 people at the time of his death. In addition he founded Buffalo Brass Co. which subsequently became one of the constituent parts of the Magnus Metal company, which Hewitt and his brother, Charles M., controlled and managed for some years. One of his horses was reported to have won the Kentucky Derby.
The key point to our story is he came to Buffalo and built this masterpiece in time for the 1901 Pan American Expedition, where he entertained the elite of Buffalo society. This was a cutting edge house built in a time when Buffalo was the city of light. He spared no expense with the finest windows, tiles, wood, electric lighting – with dual purpose fixtures that included a gas backup, and central heat. 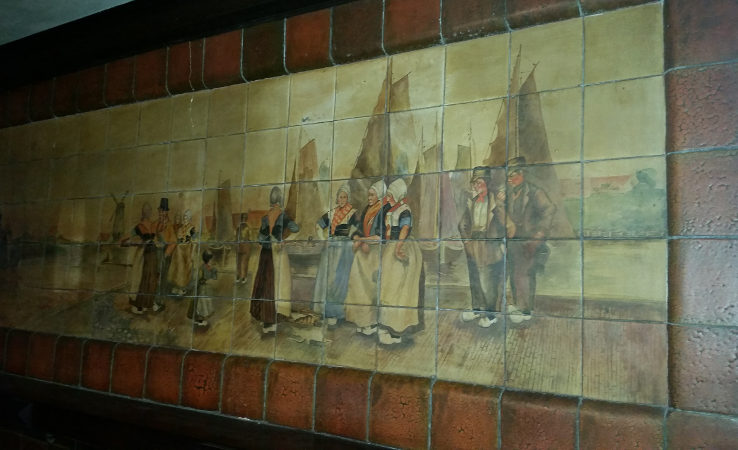 Too Good to Be True
As compelling as any is the story behind the story – how do you get a grand old mansion in one of America’s best ‘hoods at city auction? Well, beyond the Hewitt era, time goes by. You’ve seen Downton Abbey right? WWI, the great depression, WWII – over the years the mansion becomes a boarding house for some 50 years with a long list of tenants, some less desirable than others. It’s the same thing that would have happened at Downton if not for the ingenious American Matthew Crawley. Fast forward to 2011. The house is run down, renting rooms isn’t getting the financial job done and the place goes to the city auction for back taxes. The Lettieri’s have real estate knowledge, an understanding and appreciation of the neighborhood, and a few bucks burning a hole in their pocket. As good fortune would have it – for the Lettieri’s, Buffalonians, history buffs, and travelers worldwide-  the Lettieri’s go all in and buy a mountain of hard work and a lifetime of dreams. By some miracle most of the original elements of the home remain intact. A lot of time, money and elbow grease later- voila! InnBuffalo off Elmwood is here for your pleasure. Read the full Red Sweater story here.
The Lettieri’s have been painstakingly restoring this fabulous work of art history since 2013. As Joe likes to point out “this is a preservation in progress” – meaning there is still plenty of work left. Lucky for us we get to see the work in progress and not get our hands dirty.
InnBuffalo Off Elmwood is clearly one of the premier guest properties in WNY, but more than that it is a chance to experience Buffalo circa 1901, with some of Buffalo’s true ambassadors as your guides. The time machine on Lafayette is complete with Acca Kappa bath amenities. Enjoy!
For more information email the Lettieri’s at innbuffalo@gmail.com