It’s Time You Got a Handle on Handlebar 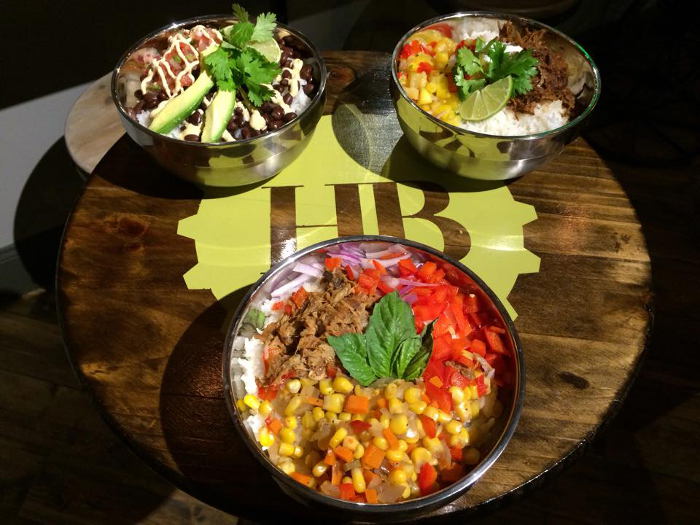 Handlebar may or may not be responsible for the biking revolution that has emerged as of late in the Queen City. Since they opened in August of 2014, the entirely bike-themed bar has been cranking out fresh food options and craft brews/cocktails that will make your taste buds high-five each other. Need a spot to go with friends? Looking for a new bar to check out for date night? Coming in hot off a biking excursion? Cyclists and non-cyclists alike can relax outside on the patio or inside the bar on custom bike pedal bar stools, where you can also fuel up your electronics at pedal powered charging stations (#blessed) and play games on interactive game tables at each booth. Handlebar is conveniently located near Coca-Cola Field, Canalside, the Cobblestone District, and the metro line. Need more? Everything on their menu –both drinks and food- is all under $10. We should mention – it’s counter service only.

We love Gastropubs because they let restaurants hone in on a few particular items and do them well, and Handlebar is no exception. Their charcuterie cheese platter, rice bowl, and pizza selections manage to offer options that seem to combine all of our favorite things (like a Thai Peanut Pizza with pulled chicken and blue cheese…you read that correctly), and we honestly can’t get enough of their craft beers and cocktails. And then there’s the space itself. Nestled right near the 190 on-ramp and Coca-Cola field, you might remember the giant 1990’s Buffalo Bills season ticket ad that was painted peeling off the side of the building not even a year ago. No more. Nowadays everything is shiny, new, and covered in bicycles and bicycle parts. On the outside, the exterior has a fresh coat of paint and new/relevant advertisements, and if you look up you’ll see The Hub’s rooftop adorned in lights and tenants of the new loft apartments having a grand ol’ time. Inside Handlebar you’ll find gothic-industrial bike chain chandeliers and unique interior design elements like gears lacquered into the bar top and bicycle photographs all over the walls. And don’t forget about the pedal-powered charging stations. Going to Handlebar really is a total-package experience that will leave you impressed from the time you walk (or ride) up to the building to your first taste of their menu and beyond. 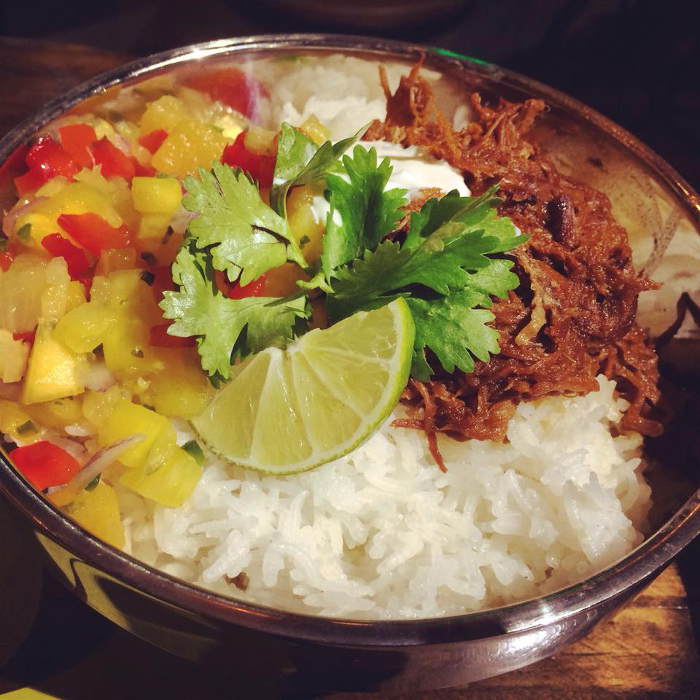 The menu at Handlebar is crafted with love and care…and lots of good stuff. One of the most raved about items they offer is their charcuterie cheese platter ($12) which comes with a mouthwatering array of cheeses, meats, crackers, olives, and a spread that pairs nicely with a cold, boozy beverage. Their rice bowls are a relatively new addition to their menu and include options like the Hulopoe Bowl (pulled pork, pineapple jalepeno salsa, cilantro, sour cream – $8.45), Buddakan Bowl (corn salsa, red pepper, curried chicken, basil – $8.45), Marrakech Bowl (Moroccan spiced chickpeas, carrot, red pepper, cilantro – $6.95), and the Baja Bowl (black beans, pico de gallo, avocado, cipotle cream sauce, cilantro – $6.95/meat +$2) . If you’ve got pizza on the brain -which let’s be honest, we always have pizza on the brain- have we got good news for you. We’re talking Thai Peanut Pizza (pulled chicken or tempeh, carrots, onions, red pepper, blue cheese – $8.95), Smokey Portabella Pizza (mushrooms, parsnips, smoked gouda and cheddar curds – $8.95), and of course a classic Margherita Pizza (fire roasted vodka sauce, fresh mozzarella or daiya, fresh basil – $7.75). If you’re still hungry after all that try one of their homemade desserts, which include the likes of Apple Cobbler (apple cranberry cobbler served with vanilla ice cream – $4.95), Maple Walnut Bread Pudding (also served with vanilla ice cream – $4.95), Resurgence Sponge Candy Stout Sundae (vanilla ice cream topped with bittersweet stout syrup and whipped cream – $3.95), and Nutella Stuffed Chocolate Chip Cookies ($1.50). 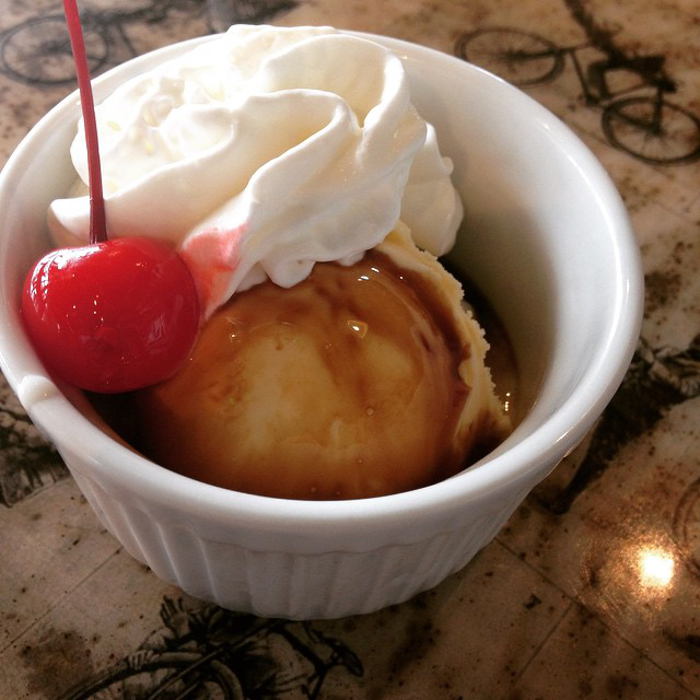 Drink-wise these guys and gals have got you covered, too. They’ve got your favorite local brews on tap, including rotating craft beers from Big Ditch, Community Beer Works, Hamburg Brew Company, Flying Bison, and Resurgence Brewery. On Tuesdays-Fridays between 3pm and 6pm all the aforementioned brews are only $3 aka some of the cheapest prices on craft beers out there. If you’re not a big beer person or just looking for an ingeniously made cocktail check out the board behind the bar, see which drink suits your fancy, and dive in! Some cocktails are only offered seasonally but year-round you can enjoy their Sangria ($8), The Rickshaw ($9), and my personal favorite The Slapshot ($9) – but more on that later.

I’ve been to Handlebar a few times and each time I leave as a satisfied customer. Unfortunately some of the things I’ve ordered are sadly no longer offered (RIP their gourmet potatoes), but lucky for me and you the majority of them are still around.

Walking into Handlebar you’re immediately greeted with people working out on various exercise equipment to the right of the entranceway and people eating and enjoying libations to the left. It’s like one of those movies where the protagonist has to choose the path between good and evil. Choose the left path (we’ll let you decide if it’s the good or evil one). Once inside you’ll find yourself immediately surrounded by bicycle everything – the barstools, the tables, the bar, the walls, even the light fixtures are all bicycle-themed. It’s a hipster’s wet dream come to life, and we kinda like love it. 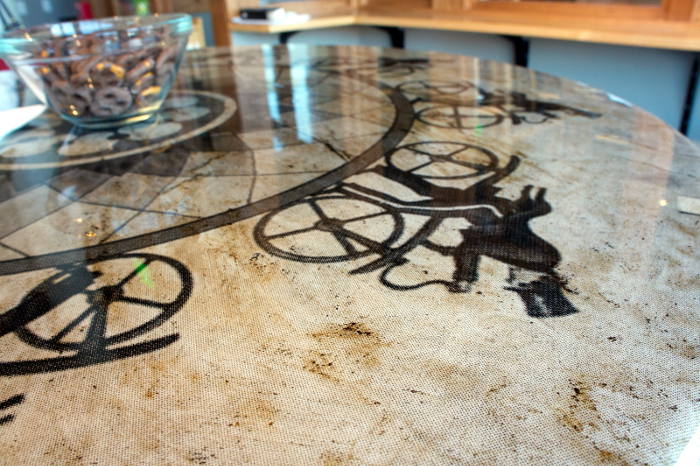 First things first we always walk up to the bar and survey the day’s brew and cocktail options. Depending on the day/week/month/season you’ll find different options for each, one time during fall I had a pumpkin-flavored beer with a shot of vanilla vodka and it tasted like pie. It was called Vanilla Pumking Pie ($9). It was great. I mentioned before that my go-to drink at Handlebar is the Slapshot, and if you’re a true Buffalonian/like things that taste good you’ll appreciate this drink because it’s made with LOGANBERRY and whiskey, but most importantly LOGANBERRY.  Loganberry expertly mixed with alcohol. If only my 8-year old self could see me now. 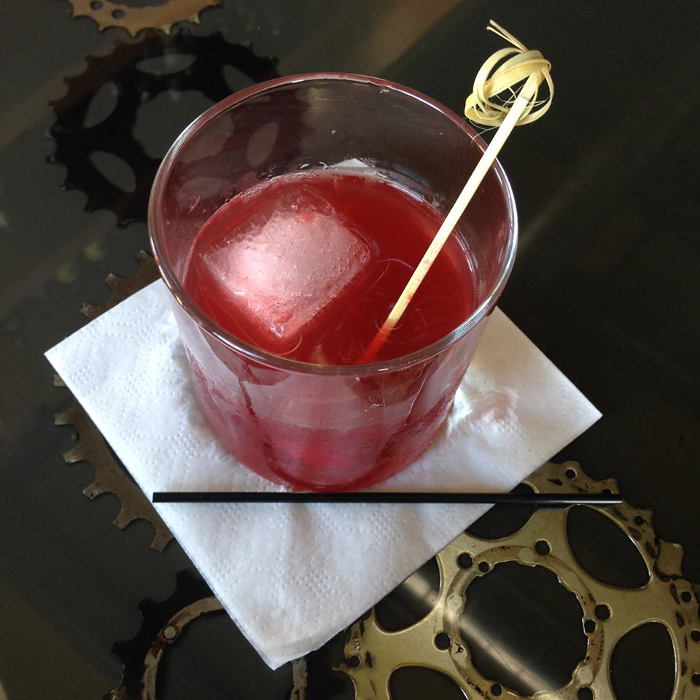 Next stop: food. The Greek Pizza (garlic oil, spinach, tomato, olive, onion, feta cheese – $7.75) is pretty fantastic for those who enjoy Greek food and also pizza. All of the ingredients blend wonderfully together and the feta cheese is melted to perfection. The Southwestern BBQ Pizza (bbq pork or tempeh, corn salsa, cheese curds – $8.95) is another great choice for those who like to make their favorite foods better by putting them on pizza. We had the BBQ pork and were happy with our decision, but I would love to try the tempeh next time around. Each pizza is a good size to be consumed by one person, unless you’re also ordering lots of other stuff to split in which case you is kind, you is smart, you is important. If you’re looking for some lighter fare (or feeling guilted by those people you saw working out when you came in) any of their rice bowls are a solid decision. The rice bowl options seem to change from time to time so I won’t torture you by describing ones I’ve had that might no longer be available, but all of their rice bowls range in price from $7-10 and no matter what you choose you really can’t go wrong…which also sums up every experience I’ve ever had at this place.

Lauren is the Creative Marketing Director at Step Out Buffalo aka the person who posts all those memes on social. A lover of Buffalo, food, travel, and animals, she can usually be found trying different local restaurants while planning her next adventure and asking passersby if she can pet their dog. Follow her dog-petting adventures on Instagram @laurenspoth
Find More ➭ Downtown
×