As if there weren’t enough exciting things happening in Allentown this month (A.B.V., Black Swan Lounge), the neighborhood has snagged another restaurant with a lovable food concept – poutine. And not just just any poutine. Poutine made by Canadians – Fort Erie to be exact. 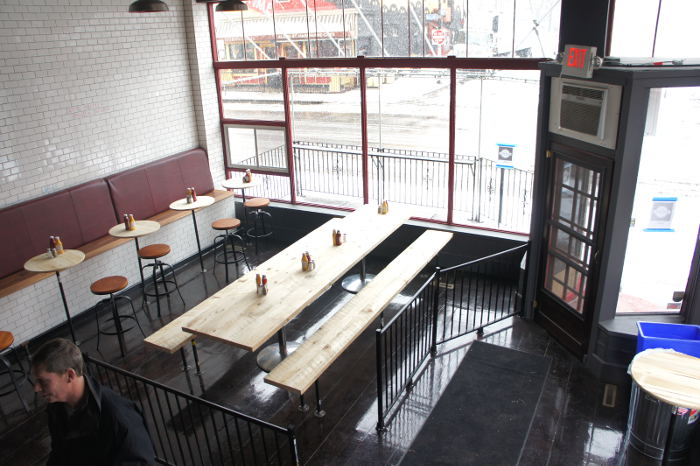 Allen St. Poutine Company has transformed what was most recently Crust Pizza Bar, into an authentic poutine eatery, equipped with a heavy duty french fry cutter ready to turn Idaho potatoes – that’s the kind they use – into fresh, homemade “chips”.  According to Canadian owners, Konstantine Kentros and Jake Fraser, the whole space has been redecorated. In my opinion, it looks great – very different from anything we currently have in WNY.

The cosmetic work done in the 1.5 story space includes a handsome banquette along the far wall of the first floor accompanied by high top tables, stools, and a large community picnic table that somehow fits right in. One of many finishing touches inside is the huge glowing sign above a whimsical chalkboard menu, stating their name and claim to fame. 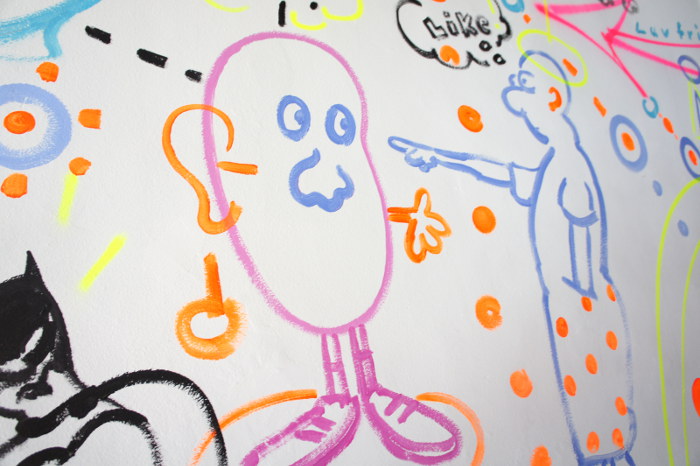 The most noteworthy aspect of the interior is the vibrant mural by local artist Peter Fowler, decorating majority of the wall space. The artwork features the likes of Mr. Potato Head (duh), batman, and friends. The words fitting and entertaining come to mind. Interestingly enough, the artist had a studio behind Allen St. Poutine Co. way back when. Local, lovable, authentic. What more could you want in a poutine shop?

If you’re fuzzy on the details, Poutine is a dish traditionally made with french fries and a light brown gravy-like sauce, topped with cheese curds. It’s found across Canada and has spread into the northern states in the US, but according to Wikipedia, originated in Quebec in the 1950’s. It’s widely known as a fast-food dish and at this point has made a name for itself through several variations of the original recipe – because let’s face it, almost anything tastes good on fries.

They have to be the right fries though. And from the sound of it, they will be. ASPC (can I call it that?) uses an 8 step process to ensure they produce a quality product. They use small Idaho potatoes to create bite sized fries – the better to perfect the optimum fry to topping ratio per bite. Seriously. That’s why. The potatoes are twice fried. (Code for: will make your eyes roll back.)

Allen Poutine’s house made gravy is made with rice-flour and the fries are cooked in a soy-based oil. Healthy isn’t exactly what they’re going for, but big flavor is.

A glance at the chalkboard behind the counter reveals a simple menu and a respectable price point, with options for small ($4.95) or large ($5.95) regular poutine dishes, Chilly Cheese Fries ($7.45) and a smattering of specialty poutines. Nacho poutine and pulled pork ($8.45) – I’m comin’ for ya. 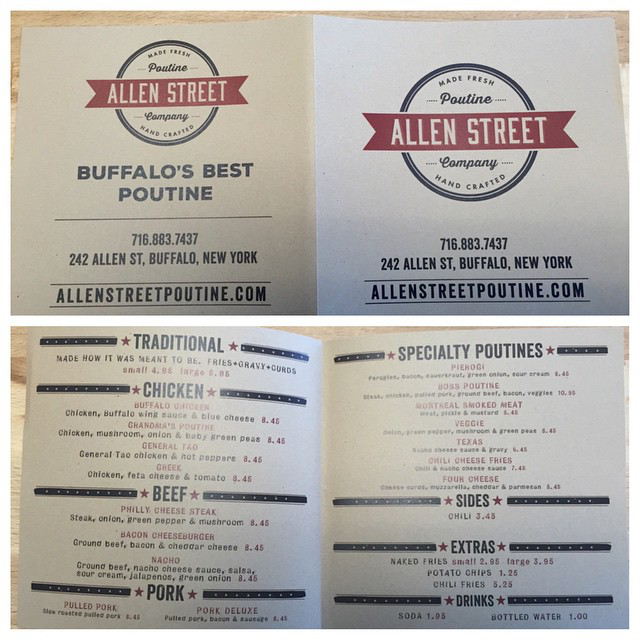 Oh and by the way, there will be Ketchup Chips too. It’s a Canadian thing, and they’re worth a try. “We do plan to serve beer, however not until June due to the time it takes to receive the license,” explained Jake.

After a quick practice run last weekend, Allen St. Poutine will officially open to the public on Friday, March 27 for lunch at 11:30am and will remain open until 3am. Going forward hours will be Sunday-Thursday 11:30am-1am, Friday-Saturday 11:30am-3am and closed on Mondays (“Poutine pooped!”)

Emily is co-founder and Director of Storytelling at Step Out Buffalo. Her favorite things to do are eat, travel, and think up business ideas. Emily is originally from Hamburg, NY and her out of town friends will tell you that she loves to talk about Buffalo any chance she gets.
Find More ➭ Allentown, Downtown, Lunch
×