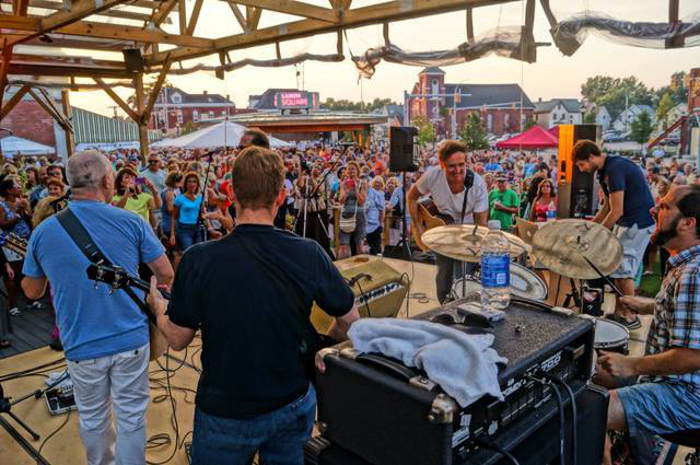 South Buffalo Night at Live at Larkin / Photo from Facebook

While much of Buffalo was dining at food trucks, including old mainstays and a handful new-to-the-scene mobile eateries, at the business district’s Food Truck Tuesdays season kick off on Tuesday night, the folks at Larkin Square unveiled the full lineup for its Live at Larkin Wednesday night music series.
Kicking off on June 1st, the 14 week series, which is entering its fifth summer, will jump start with a six-
act mega showcase highlighted by John and Mary (of 10,000 Maniacs fame) & the Valkyries. The
Dixieland inspired outfit Fredtown Stompers, the Big Easy by way of Kenmore East High School
act French Quarter Hounds, and more will round out the opening night bill.

As with past years, the Live at Larkin series will play host to an eclectic collection of groups including the world beat stylings of Outer Circle Orchestra, folk-rockers Tom Stahl & the Dangerfields, and evolving garage-pop trio the Tins, in addition to a handful of tribute nights paying respect to legendary acts like the Rolling Stones, Johnny Cash, and Frank Sinatra

Also returning to the series are the popular themed nights which include “East Side Night” on June 22nd, “Latin at Larkin” on July 6th and “South Buffalo Night” on August 3rd.
A full lineup for the Live at Larkin series can be viewed on Larkin Square’s facebook page. Music will begin weekly at 5pm. Entry is free of charge.