Food & Drink, Lifestyle, Things to Do 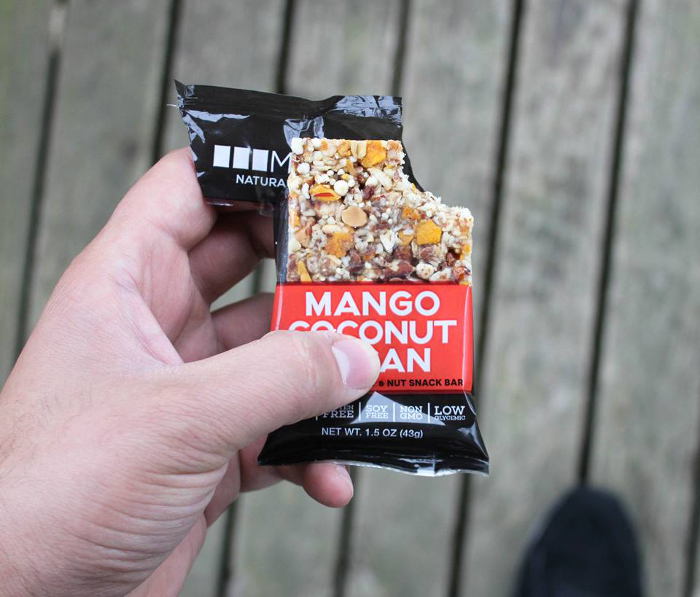 We’ve all heard the story before.
The child of recent immigrants starts his first business as a teenager, goes to college and then drops out to start another business built to disrupt an entire industry.
But this time, the story isn’t coming out of Silicon Valley. It’s coming out of Western New York.
Danny Elkhoury is the 23-year-old son of Lebanese immigrants and the CEO of Mazra, a company he started to take direct aim at healthy snack companies like KIND and Larabar. Along with his brother Alex and business partners, Danny Elkhoury started his company by asking why the American healthy snack industry is the way it is.
“If you go to a supermarket and pick up a snack bar that’s all natural – you’re expecting to pay $2 or $3. It was our theory that it does not have to be that way,” he told me as I sat with the Elkhoury boys in Mazra’s boardroom. “We’re a small-time manufacturer and even we can afford to sell these products for much less than some of the leading brands.”
“A KIND  bar sells for $1.75, $1.99, $2.50 in some places, and they’re the largest in this category. They sold 900 million bars last year! Even at our scale, we can afford to offer a low enough cost for the stores to sell a Mazra Bar under $1.50. And as we’ve grown, our prices have actually dropped because as we save money here, we’re forwarding those savings on to our wholesalers and retailers so ultimately the consumer can get a better product for way less money.”
The Elkhourys’ parents immigrated to Buffalo from Lebanon in 1987, and the boys spent their toddler years growing up on Buffalo’s West Side. The family went back to Lebanon in the early 2000s for a couple years, but the Elkhourys eventually returned to Western New York, settling this time in Cheektowaga.
Danny started his first venture, a turnover pastry business, before his 16th birthday, and he credits his father, a salon owner, with grooming his and his brother’s entrepreneurial spirit.
“He’s the one who pushes us to make these very risky moves,” Danny said. “He backs them 100 percent, even though he doesn’t have many resources. He makes it alright for us to take a risk.”
“Without him, we wouldn’t be here,” Alex added.
The pastry business quickly turned from a small project making 30 or 40 pastries in the family kitchen to a full-fledged business, complete with a production facility and a dozen employees that churned out 40,000 to 60,000 pastries per week. This modest little venture taught Danny Elkhoury about everything from food production to wholesaling and distribution. In order to make their products available, he and his father approached convenience stores on East Side and West Side.
“We would fit the stores with warming units, deliver our products every single day, and they would sell the pastries warm,” he said. “So that was a pretty cool business model we had over there because we were the only ones doing it, and there was a consistent revenue stream.”
“Those small convenient stores,” he continued, “it’s all about the bottom line for them. Everything was done on a consignment basis, so they had nothing to lose. We supplied the warming unit, we gave the product, and if the product didn’t sell – we bought it back.” 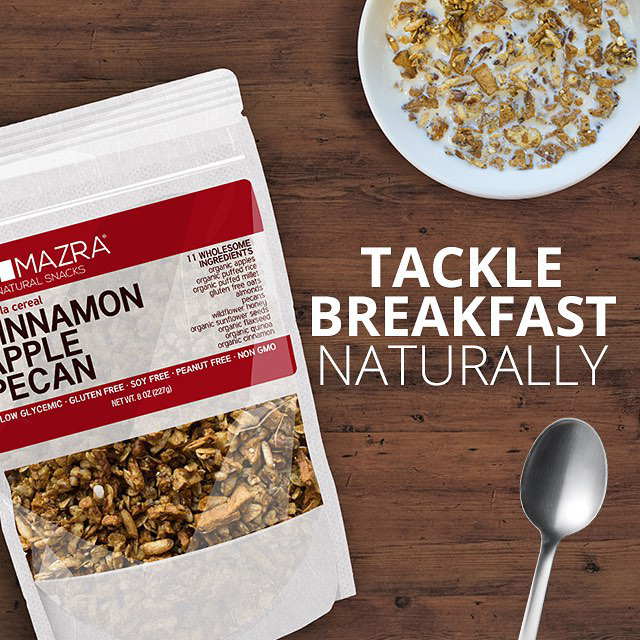 Making a “sh*t load” of money as a teenager with his own business, those must have been pretty heady days. In addition to making all that bank, Elkhoury also received a world-class education. Forced to wear many hats, Danny found himself being everything from a negotiator to a graphic designer.
As successful as that first business was, an ambition for something greater led to conflict with his business partner and the company’s ultimate demise.
“The convenience stores were awesome, but there was a cap to how much we could grow,” Elkhoury said. “I saw the cap and I wanted to address it. I wanted to get more involved with retailers like Wegmans and Tops. That was something my partner and I didn’t see eye to eye with.”
After partnering with local chef (co-founder of Mazra) Bryan Dunn, Elkhoury switched his focus to developing healthy, natural snacks. After 20 months of developing all their product lines, Mazra finally landed its first retailer – the Lexington Co-Op.
The snack bars the company came up with are peanut-free, soy-free, non-GMO and made from all-natural ingredients. Mazra also sources locally, with honey coming from Fiegel Apiaries and maple syrup from Maple Glen Sugar House.
Fifteen or 20 years ago, you might have heard Buffalonians preach about buying local, as if it were your civic duty or guilt-tinged obligation. However, with the recent emergence of new iconic local brands like Big Ditch, Lloyd’s, and Lockhouse – local means more than supporting your neighbor. Now, local also means good.


Mazra Bars are no exception. They’re just as tasty as the all-natural snack bars you might spend a few bucks a pop on. They also have a texture that’s very approachable.
The bars aren’t made from a hard “paste” like Luna bars, and they’re not a combination of whole nuts like a KIND bar.
“Texture is super important to us,” Elkhoury said. “That’s something that took us a long time to develop because we don’t want to be a soft bar, but we don’t want to be a hard bar either. We wanted to get right in the middle of both, and that is something we were able to accomplish.”
“A lot of moms email us saying, ‘Finally, a bar that we can appreciate the ingredients in and our kids can eat at the same time.’”
Getting that kind of feedback from local moms plays right into the Elkhourys’ holistic business model. Danny readily admits Mazra has had financial bumps in the road, but he’s willing to put up with them and the very modest profits in favor of doing something long-term and with a lasting impact. 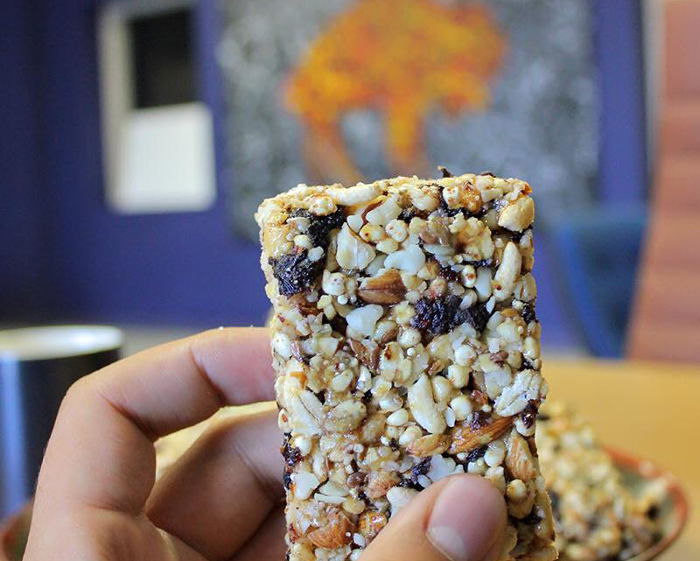 “Most start-ups want outside investments to fund growth,” he said. “The reason why we’ve had so many financial crises is because I’m totally against that model. Once you introduce outside investments so early on in your growth, it becomes harder to stay true to the long term vision, and that’s something I’m not willing to compromise. To some it may be a very different way to grow a business, but to me it’s actually the only way. We could easily charge $2.50 per bar on our online store and that would fund our growth much quicker with a 150 percent margin versus a 30 percent margin.
“Some people will say that’s a dumb way of growing a business, but I say it’s the only sure way to make a brand a staple. Sure, it takes longer to grow, but it sticks to the consumer eventually, they’ll start to realize natural shouldn’t be an option, it should be a standard.”
In addition to taking a long-term approach, Mazra is also taking direct aim at other higher-priced all-natural snack companies – in the same way that Chobani took on Greek yogurt. In fact, Chobani CEO Hamdi Ulukaya is a major influence on Danny Elkhoury, particularly the way the company made Greek yogurt an affordable mainstream product, rather than the luxury-priced item it once was.
“We literally want to try to manipulate the market and force these big corporations to drop their prices,” Elkhoury said. “Because once one manufacturer does it, while educating consumers on the accessibility and importance of natural ingredients, the rest will have to follow; otherwise their products will become obsolete.”
Meeting with the Elkhoury boys, hearing them talk and thinking about the waves of immigrants currently settling on the West Side, it’s hard not to think about an ideal future for Buffalo and Western New York – where a diverse group of entrepreneurs is driven to bring great products to market and send shockwaves across their industries. We’re proud to have Mazra leading the way toward this ideal future here in Buffalo.
For more info on Mazra Natural Snacks and to buy a delicious box of snack bars head to mazrasnacks.com. Plus, follow Mazra on Facebook, Twitter, and Instagram!