Published on March 8, 2014
Photos, video and article by Christina M. Abt
1 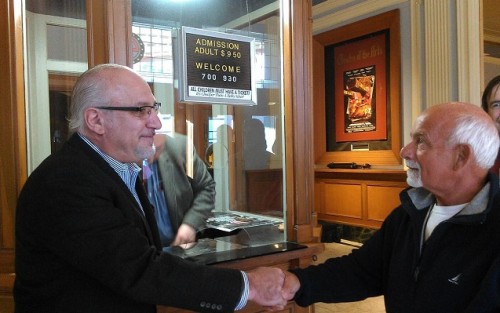 On November 21, 1921, Buffalo entrepreneur and businessman, Michael Shea, opened the doors to his most opulent
movie house to date. It was set on Hertel Avenue on the outer rim of the Queen City, just north of Fredric Olmsted’s 30- acre Crown Jewel, Delaware Park. Thus was born, Shea’s North Park Theater.
The 1,222 seat cinema was designed by Henry Spann and boasted opulent features such as crystal chandeliers, stained glass windows, soaring pilasters, marble floors and two hand painted friezes by respected artist, Raphael Beck. Yet at the core of the North Park’s popularity was the simple fact that for more than nine decades it was a neighborhood gathering spot for movie lovers of all ages. That, in and of itself, made the North Park Theater a Queen City treasure.
Like any Grand Dame, the North Park entered the twenty first century revered and respected, but definitely diminished from her original grandeur. Buffalo’s movie goers were passing-by the local Grandmere of cinema in favor of plasticized, modern cineplexes. Fewer ticket sales meant fewer dollars for renovations and repairs. And when the Dipson Theater Chain announced that they would no longer present films on the North Park’s screen, it seemed possible that the house lights would be forever dimmed.
Enter attorney, Thomas Eoannou and restauranteur, Michael G. Christiano, Buffalo guys who grew up with the North Park as part of the fabric of their lives. They remembered the beauty and grace of the aging theater. More importantly they knew the value of Shea’s cinema in the overall quality of life for the Hertel Parkside Community. So they committed their passions, their time and most importantly, their money to not just keeping the aging theater alive, but making it a vibrant neighborhood movie star once again.
Last night was the grand opening of the restored North Park Theater and grand was definitely the buzz word of the evening. From the rediscovered marble foyer floor to the unearthed burgundy- accented concession stand, to the meticulously restored murals claiming center stage alongside the massive silver screen, Michael Shea’s opulent movie house vision was clear and impressive.
As patrons lined up out the door to purchase tickets, as surrounding restaurants accommodated theater goers for dinners and drinks, as celebratory movie goers filled the theater with their memories of their past and imaginings for the future, it was clear that the most significant part of the North Park Theater had been restored. The hub of a community was once again in place, weaving the lives of people of all ages together in a remarkable story….just like in the movies.
Information on The North Park Theater and movie features / times can be found on the theater website.
Read the story behind
the incredible North Park Theater chandeliers.