New: The Mahony Inside Fairmont Creamery

One of the best aspects of Buffalo’s on-going resurgence is the reclamation of spaces built during the city’s more bustling times.

The Mahony– A Great American Eatery is a restaurant housed in one of New Buffalo’s glorious reclaimed spaces and chef-owner Brian Mahony has built his restaurant’s concept around looking ahead to America’s future, while acknowledging the past.

Located in the Cobblestone District, The Mahony sits on the ground floor of the old Fairmont Creamery building. The massive red brick structure was built in the 1920s as a cold storage facility and purchased by Ellicott Development in 2001.

The building had been largely renovated by the time Mahony moved in and his design concept features the exposed brick walls that were originally erected to keep dairy products cold.

The décor is founded on a traditional British pub, and walking through the restaurant – you can feel the communal intimacy of those spaces across the pond. However, Mahony had his designer take that traditional concept and extrapolate it to the 21st century. The result is a sleek and modern mix of old and new. Looking around, I couldn’t help but think the Mahony would be a great backdrop for a tension-filled scene out of The Matrix.

That being said, Mahony recently told me he isn’t just hoping to draw people in with his restaurant’s magnificent look.

“For longevity, you’ve gotta knock it out of the park with the food,” he said, looking me dead in the eye.

After going through three or four business plans, Mahony settled on a menu that recognizes the changing face of America. In addition to traditional Italian fare, The Mahony features Asian as well as Mexican dishes. 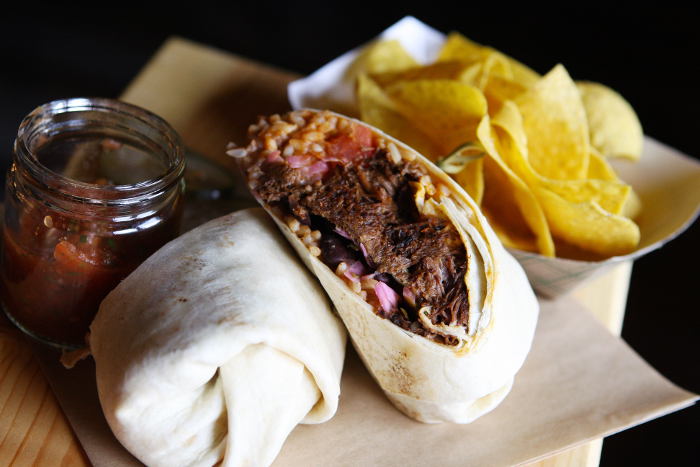 The chef-owner told me he wanted to cater to the varied tastes of business people working in the Fairmont above him and challenge his culinary staff at the same time.

“There’s so much diversity in the building, and with people coming down for lunch – I couldn’t go all one genre or they’d get sick of me and they would go somewhere else,” he said.

Born and raised in Western New York, Mahony said the menu features his American take on classic dishes from other countries. He is essentially packaging flavors that may be unfamiliar to some, in a familiar way. Even the way the menu is written is designed to be approachable. For instance, Mahony calls his dish based on Vietnamese pho “Asian noodle soup.”

Mahony reassured me that his foreign dishes will still taste like the original, but feature his own unique twist.

“If it’s one of my Asian dishes, it’s going to have an Asian profile,” he said. “Now, I’m American born and it’s going to be my American interpretation of what I’m tasting.

“Then there’s going to be things on the Italian side, I’m might serve something that’s from Northern Italy, but then there might be New Jersey Italian gravy. All the food in the country is becoming less and less segregated. It’s all kind of blending together because we have access to everything: everybody is so much more transient, we have the internet, we have the Food Network…”

The chef said people can expect the menu to change soon, based on what his customers are responding to. In the coming months, The Mahony will also feature weekly menus with themes focusing on different locales or regions, like a Paris, New Mexico, or the Pacific Rim.

Despite being on the outskirts of the Cobblestone District, Mahony told me he expects to see people coming over from Canalside or the nearby Seneca Casino.

“I definitely want to be a destination restaurant,” he said. “I don’t want to be an event restaurant. The events are going to spill over and help, but there’s too few of those.

“I’m here everyday and the events aren’t. So, I want to make it where the events come in and you’re going to need reservations because its already going to be busy. At least that’s the goal here.”

For more info on The Mahony at the Fairmont Creamery head to their Facebook page and website.

The Mahony – A Great American Eatery

Brett Llenos Smith is a freelance writer based in Buffalo’s Allentown neighborhood who has been covering local food and culture for Step Out Buffalo over the past six years. As someone with a multi-ethnic background, he has a passion for exploring and understand the many diverse corners of Western New York.
Find More ➭ Canalside, Cobblestone District, Downtown