Where to Watch March Madness in Buffalo 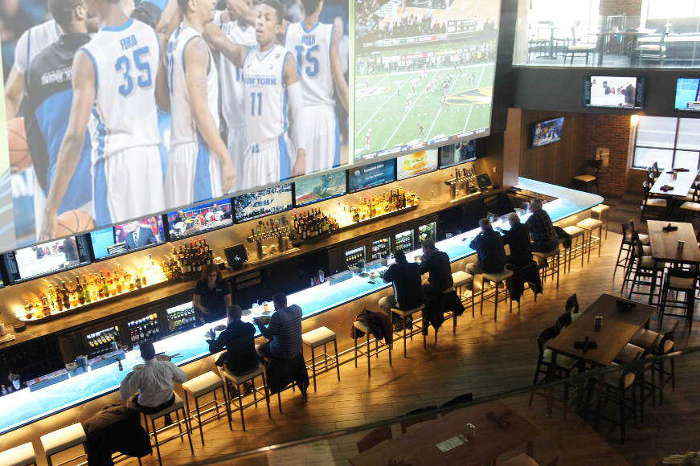 The first full day of the men’s NCAA basketball tournament tips off today. Even the most casual hoops fan has a hard time resisting the “March Madness” excitement that includes office pools, frenzied fans and of course the exciting action of dozens of college basketball games where the winners advance and the losers head home for the season.

While there are some sports fans who prefer to watch the games in the comfort of their own homes, the general consensus is that the best place to watch the action is inside a sports bar with multiple high-definition television screens, good food and drink, and a lively crowd supporting the various teams.

Step Out Buffalo has compiled a list of some of the best places in Western New York to watch the tournament. Just like the action on the court, our list will be revealed over the next few weeks as the tourney progresses and the excitement builds. Here is today’s first installment of eight destinations located within the City of Buffalo, with future installments to include more places to watch the games in the city, in the Northtowns, in the Southtowns and everywhere in between.

So grab your office pool bracket and jot down some of these suggestions before you duck out of work early to hoop it up: 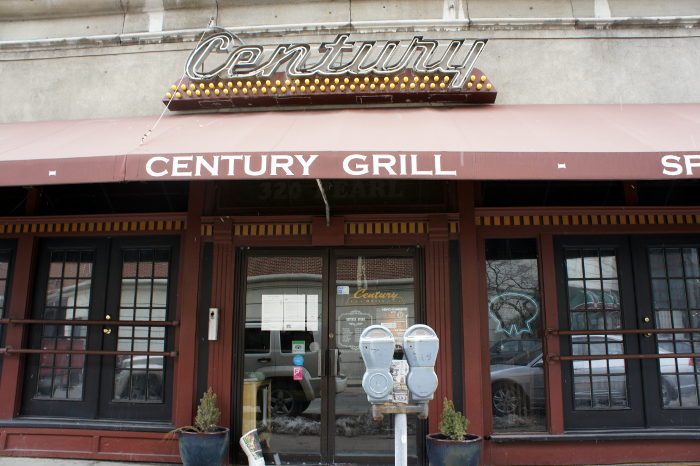 Located across from the Hyatt Regency Buffalo in the heart of downtown, The Century Grill has an extensive menu with a distinctly Buffalo flavor. For basketball fans, this represents an ideal setting to grab a bite to eat and enjoy some drinks while watching the March Madness action unfold. 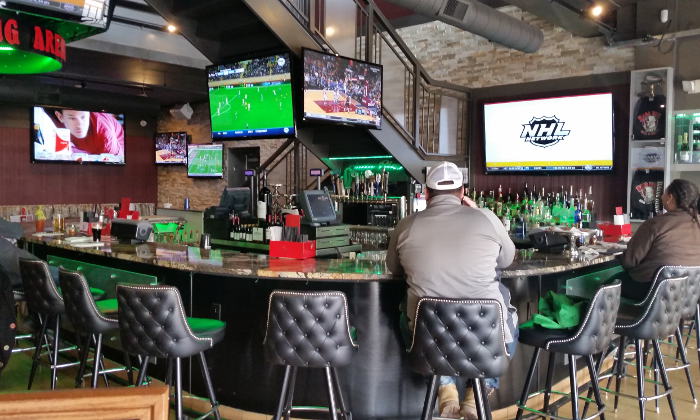 This bar has slowly evolved from being known in its infancy as “a college bar” in the Chippewa business district of downtown Buffalo to a more friendly, comfortable and relaxing restaurant that serves drinks and delicious food for lunch, dinner and late night snacks. Ordering a “Bing Sangwich” is almost required for any first-time patron. Expect many enthusiastic fans of all ages to be watching the hoops action on one of their 18 high-definition televisions located throughout the restaurant. 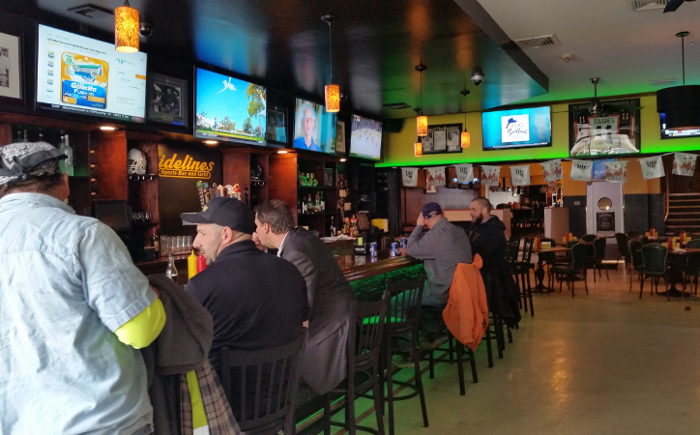 Cold drinks, live music and everyday happy hour specials are the norm at Sidelines. The sports bar theme is alive and well at this establishment. They do serve food, including a Friday fish fry featuring crispy battered haddock served with homemade sides. Fun atmosphere for watching any sporting event, including the March Madness action. 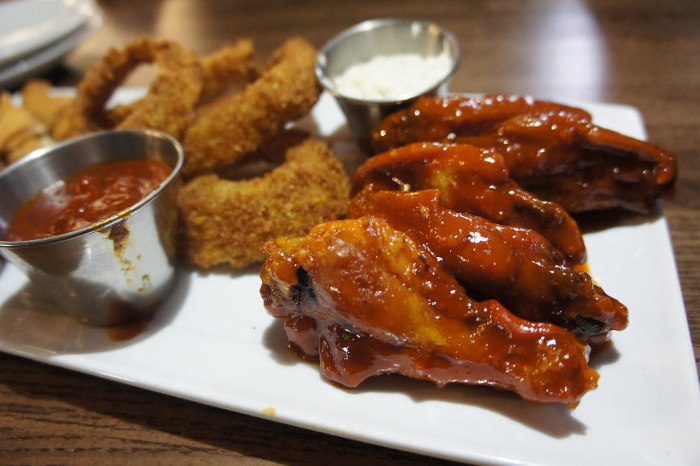 Triple Play at 716 Food and Sport

With over 13,000-square-feet of space, seating for over 350 people, including over 130 bar stools and a special VIP area, 716 has quickly become one of Western New York’s premier places to visit for anyone wanting to watch a sporting event in an enthusiastic atmosphere that has to be experienced because any attempt to explain it just doesn’t do it justice. Did I mention the televisions? There are nearly six dozen big-screen high-definition TV, including some embedded in the bathroom mirrors and the grand-daddy of them all, a 38-foot feature video screen that is located over the main bar that can be seen by both the first and second floor viewing areas. Basketball junkies will visit 716 throughout the NCAA Tournament and should never have any complaints about not being able to see the action.

Friday’s (716) Buffalo Bulls Watch Party will feature food and drink specials, along with contests throughout the game with prizes from (716) and UB.  The first 100 guests dressed in Buffalo Bulls apparel will be given a complimentary cowbell. More action throughout RESERVATIONS ACCEPTED For NCAA Championship Monday.

Sports enthusiasts already know that if the Sabres or Bandits are playing at home, Cobblestone is a place to be and be seen. Expect the same scene when the NCAA Tournament is taking place. Cobblestone has an incredible game day vibe before, during and after games played at First Niagara Center, Cobblestone is also open whenever there are concerts or other big events happening at the arena. Open every Thursday, Friday and Saturday from 4pm to 4am, Cobblestone’s dinner menu now includes brick oven-baked pizzas. 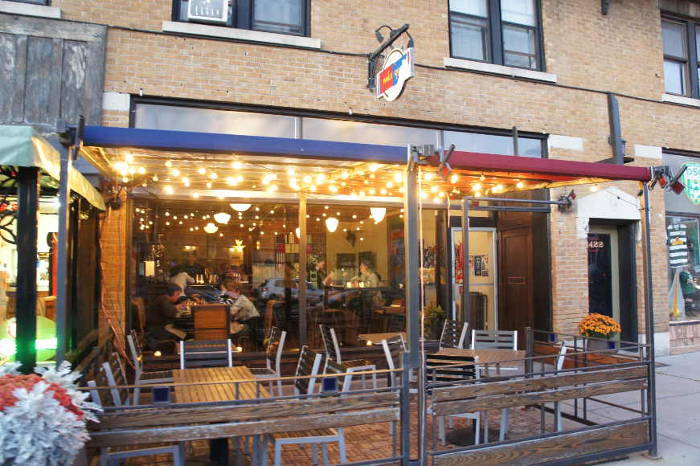 While many may refer to it as “Buffalo’s soccer bar,” a moniker they take great pride in, Mes Que also has the ability to draw some basketball fans to the bar provided it does not interfere with the viewing any World Cup soccer action. If you are not a soccer enthusiasts, you may want to call ahead to make sure the NCAA Tournament will be made available on each least one of their high-definition televisions. Mes Que normally opens at 4pm, with food served daily starting at5pm. 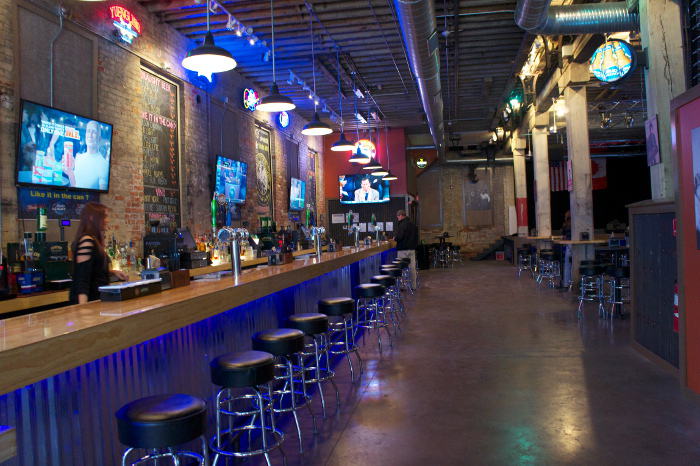 Featuring live musical performances, drink specials and a simple but hearty food menu, Buffalo Iron Works represents one of the new and improved destinations that is helping to turn around the image of downtown Buffalo. Obviously when previously scheduled musical acts perform like they have after home games throughout the current Buffalo Sabres season the music takes center stage, but in the meantime Buffalo Iron Works is a fun place to unwind and watch the drama of the basketball tourney unfold. 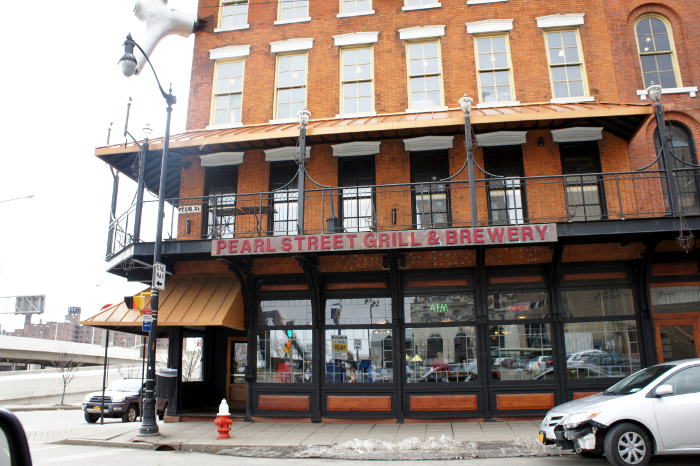 Perhaps downtown Buffalo’s most well known watering hole and dining establishment for sports fans, Pearl Street Grill & Brewery has it all, including an amazing selection of beer, a full menu for lunch, dinner and late night snacks and plenty of televisions and room to watch them. Basketball fans will visit here throughout the tournament because it represents another inviting atmosphere to relax and enjoy the games.

Feel like we missed some? We’d love to hear your favorites. Email us at info@stepoutbuffalo.com.