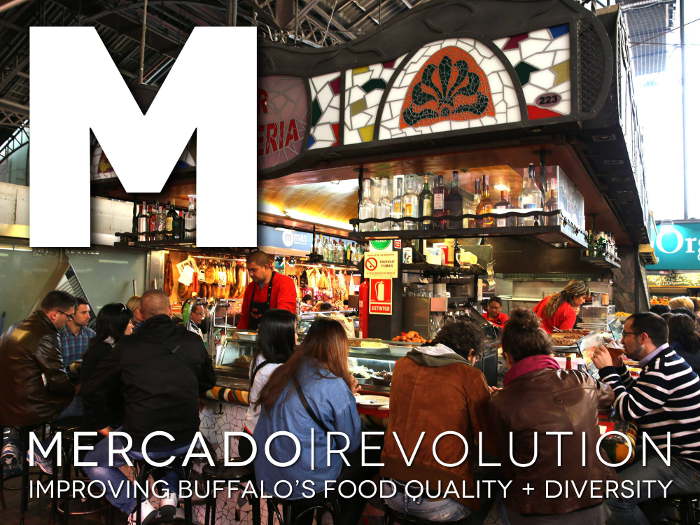 Mercado – The Culinary Bazaar is the name given to the dream of Scott Kollig and Jeremy Horwitz.  “Our goal is to create one of the greatest markets on the planet” says Kollig. I’m going to say that is one tall order, but I like their enthusiasm.

The concept, revealed today on the Mercado Revolution website, is a grand marketplace, a la European greats like Barcelona, Madrid, Paris, Florence.  “Mercado will create a central hub for Western New York artisanal foods and upscale casual dining, bringing over 15 distinctive dining options – chef- and artisan-operated – under one roof for the first time in local history.”

The Vision – Imagine a single destination where Western New Yorkers with different tastes could all find great things to eat. A place where you could mix and match your meal: a drink from a soda fountain, two plates of dim sum, some Spanish cheese and olives, then a freshly-made crepe for dessert. Or a place where you could pick up locally-made artisanal foods to bring home: freshly made tortillas for tacos, aquas frescas, and churros with the area’s best ice cream.

The Mercado group is hoping to raise $150,000 on Kickstarter.com offering a variety of “backer” packages beginning at $20.

The founders are food and drink obsessives who are going above and beyond to deliver an incredible experience for Western New York. Jeremy and Scott were born and raised in this area, both with families here, and have made it their personal life goals to significantly improve the quality of everyone’s local food and drink options. “We’re going to take everything we’ve learned in our travels and bring the best of those life-changing culinary experiences here.”

According to their bios on Kickstarter:

Horwitz is a graduate of SUNY at Buffalo (B.A., departmental honors), Canisius College (M.B.A.), and Cornell Law School (J.D., cum laude). While in college he redefined video game journalism by creating one of the very first Internet-based publications, which he sold at age 21. In 2003, he helped build iLounge into the world’s leading authority on Apple’s iPod, iPhone, and iPad products, then unified hundreds of companies to form the world’s largest exhibition of new Apple accessories. Motivated by lifelong passions for food and travel, he created the visionary restaurant review site Buffalo Chow in 2008, covering hundreds of restaurants in record time. Concerned about the long-term health of WNY’s local food service industry, he researched and then announced Mercado Revolution as the answer to local problems: a central marketplace for artisanal food products with an incubator for entrepreneurial chefs, including partner and Culinary Director Scott Kollig. Horwitz is happily married to Christina, and father to two daughters.

Scott Kollig A 2010 graduate of the Culinary Institute of America, Scott has worked in the kitchens of Manhattan’s WD-50 (Pastry Sous Chef, 2010-2011), West Palm Beach’s Cafe Boulud (Chef de Partie, 2011-2012), and Washington’s minibar by Jose Andres (Chef de Partie, 2012-2014), the most exclusive and creative restaurant in the nation’s capital. While assisting at minibar’s cocktail laboratory barmini, he earned his Certified Sommelier diploma from the Court of Master Sommeliers, then joined the Four Seasons Hotel Baltimore as a sommelier. Now an expert in both food preparation and beverage service, he will curate the food and drink programs for Mercado.

Step Out Buffalo is an enthusiastic supporter of the mercado concept. See our recent BUFFALO TREND PREDICTIONS FOR 2014:  PREDICTION #4 – INDUSTRIAL CHIC MARKETS

Check out their video here.

Congratulations to the Mercado team! We personally can’t wait to see this dream become a reality.

Guide to Karaoke Spots in WNY