I’ll admit: I was a bit intimidated to meet Keith Raimondi, co-owner of Black Rock’s newest restaurant, The Dapper Goose.
Originally from Olean, Raimondi has spent the last decade working at the some of the buzziest restaurants in Philadelphia’s booming restaurant scene. But upon sitting down with him, it turned out; Raimondi is just a dude from the Southern Tier who’ll talk your ear off about everything from great hospitality to how local taxes are spent to Rex Ryan being too lenient with his players.
“Why did Karlos Williams think it was okay to eat like 100 cheeseburgers this off season?” he asked at one point in our conversation, shaking his head.

I took the chance to sit down with Raimondi partly as an opportunity to pick is his brain about Philadelphia, and to compare what’s going on there to Buffalo’s current food scene boom.
Before its food resurgence, Raimondi said, Philadelphia’s food scene was dominated by a handful of “upper echelon” restaurants: the Four Seasons, Le-Bec Fin, and Lacroix.
“And then you had Steven Star who had a bunch of restaurants,” he added. “His were all mostly focused on how they looked and how they felt. The food was a semi-afterthought, I think, but they were cool.” 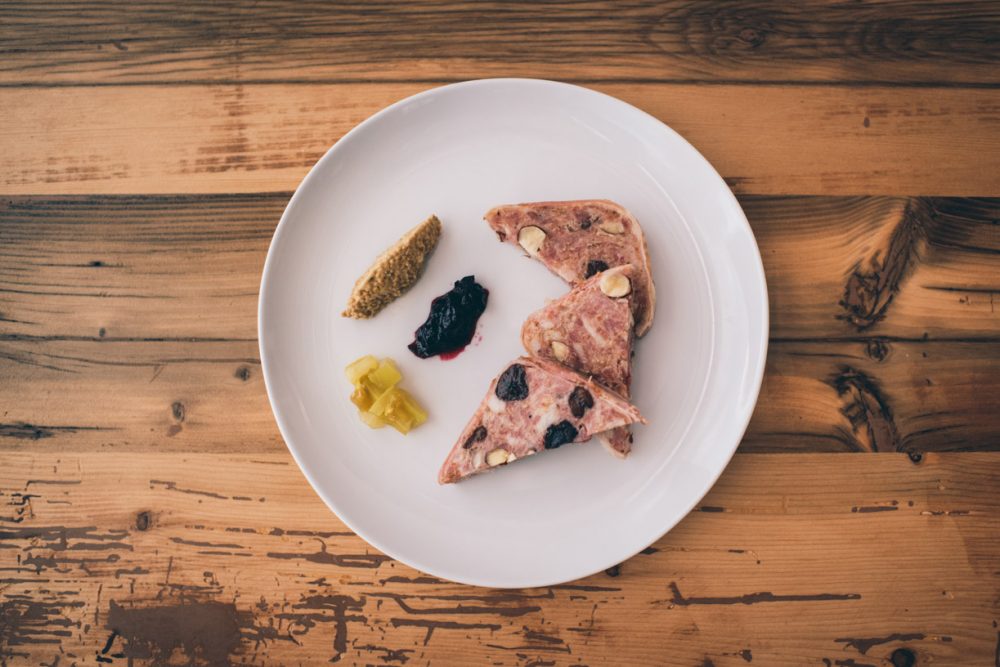 The Olean native said the big shift in Philly was the emergence of chef-driven restaurants, with chefs that had been around for a while opening up bold personality-driven eateries. Lacking local celebrities, like a New York or a Los Angeles, these emerging Philly chefs found there was space in the local zeitgeist to make a name for themselves.
“I worked for Jose Graces at Amada,” Raimondi said, “which to me was the first restaurant that kind of said to the whole world, ‘Fuck you! We’re going to do it this way and it’s going to be awesome. It’s all going to be food driven, chef driven and hospitality driven. We’re going to take all the things everyone else did, but we’re going to make it about the real experience.’”
“That’s what you started to see more of in Philadelphia,” he added.
Raimondi said he’s starting to see the same pattern emerge right here in the Nickel City.
“The other day we went to Toutant and that guy is doing awesome food his way,” he said. “Nobody else is doing something like that, you know?” 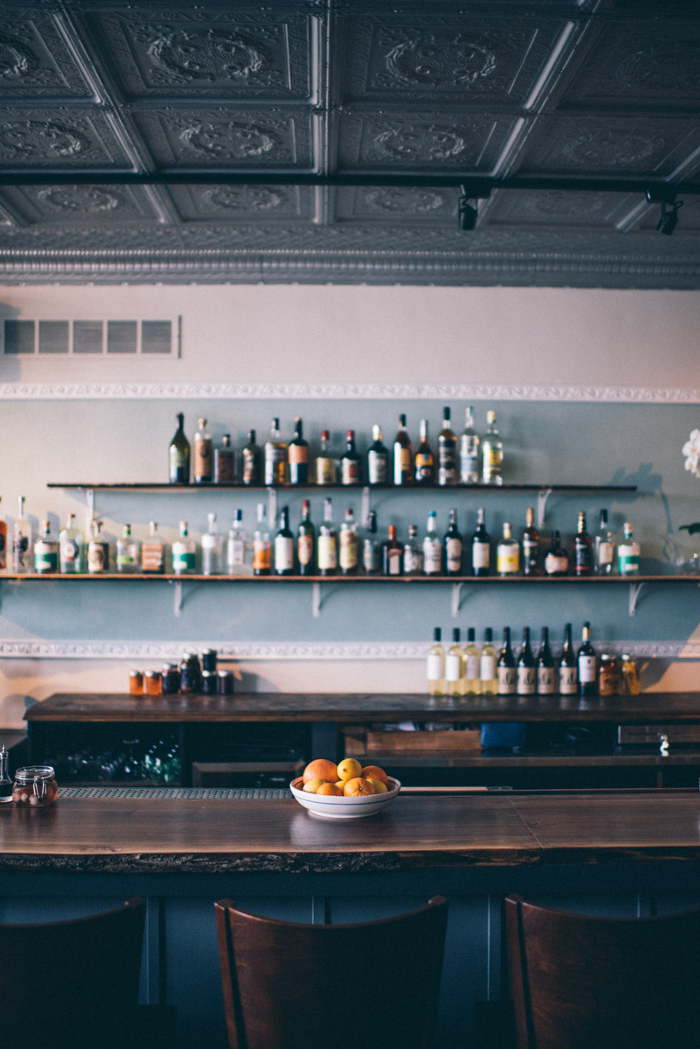 The first thing you notice upon walking into The Dapper Goose is its Turn of the Century supper club feel. Dubbed “classic French cottage” by the staff and executed by general manager Peggy Wong, the décor featured new wallpaper with a vintage pattern against one wall, as well as a palette of slate grey, robin egg teal, and lightly-stained wood. Everything about the décor was in keeping with the space’s original pressed tin ceiling. The only noticeable sign we were in the 21st century was the touchpad point-of-sale system behind the bar.
The look, the food and the service are all meant to be an extension of personalities of the restaurant’s executive staff.  Sitting down to talk with Raimondi, his partner John Beane and bar manager Tim Leary, I learned personal tastes will be the driving force behind the Dapper Goose.

“Our personality is the most important thing,” Raimondi said. “So the food is chef’s food. It’s how he feels like cooking and how he likes to eat. The beverage program is set up with the things that we love.”
The executive staff said “crushable bar snacks” would be a major focus at the Dapper Goose and the opening week menu is set to feature many fantastic-sounding small plates: fried cauliflower with green goddess dressing, roasted oysters and a tuna ceviche in a coconut broth. Large plates include housemade fettuccine, Korean-style fried chicken and a burger with housemade American cheese. It’s all the kind of food you can imagine a great chef tucking into at 2 a.m. after a long shift, a six-pack and half a joint.
Raimondi, Beane, and Leary were probably most keen to discuss the cocktails, beer, and wine that’ll be offered at the Dapper Goose, with each one of them in charge of one type of beverage.
Raimondi, who placed second in Eater Philly’s Bartender of the Year for 2015, said his cocktails will feature ingredients made in-house, such as fresh squeezed juices and housemade bitters. A particular focus of the cocktail program will be low-ABV cocktails built around aperitifs and digestifs.
“You can only drink only so many Old Fashioneds. I mean I can only drink like 11 or 12,” Raimondi said with a laugh. “Most people can have like two. 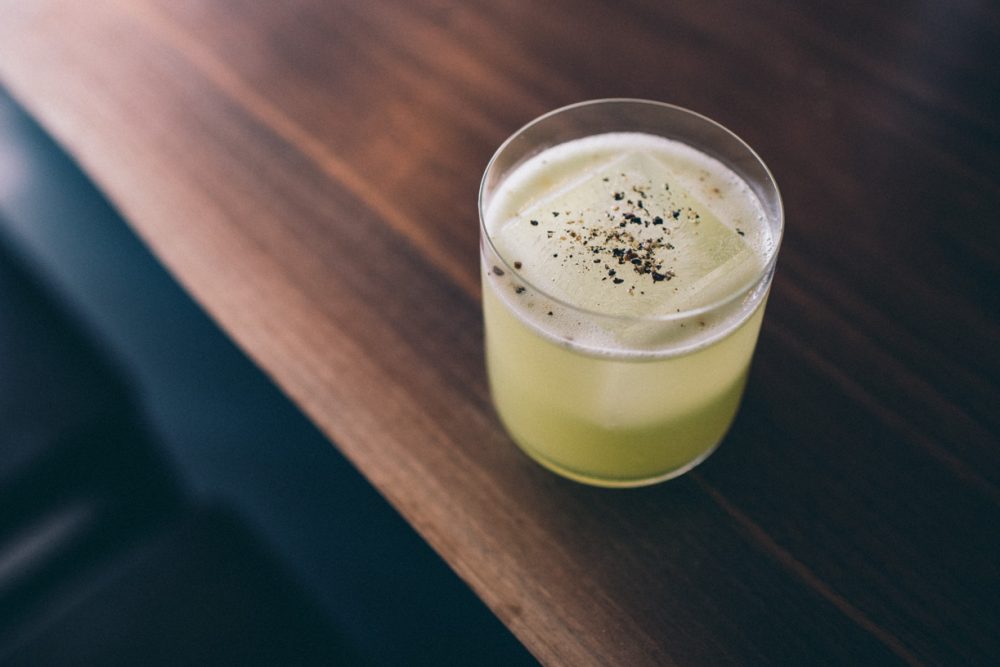 “A lot of this stuff is meant to go with the food. So, if we’re jamming alcohol and intense flavors down your throat, eventually it’s going to pass over your food and you’re not going to be able to enjoy it.”
Beane, an Olean native as well, said cider will also be a focus, especially the ciders coming out of Spain and France. The beer list will be rotating regularly and feature some of the more interesting products coming out at the moment.
“I think some of the saisons and the farmhouse ales that are coming out right now are pretty cool,” he said. “But, the biggest thing is that it’ll all make sense. Like the cocktails and like the wine, everything will be very matchable with the food.”
Leary, who is Philadelphia born and raised, said the Dapper Goose will have both on-tap wines, as well as bottles available. The bottle list, Leary said, will feature some of the staff’s favorite more-obscure wines, while on-tap offerings will be varietals that showcase each particular grape in a unique and flattering light.

“You hear Chardonnay and you think, ‘Aw man, it’s buttery and creamy,’” Leary told me, speaking with a healthy Philly accent. “Well that’s just the notion you get because for a long time California just over extracted Chardonnay. When you have a Burgundy Chardonnay, it’s so much leaner, crisp, and brighter.”
The team at The Dapper Goose said their main goal is to build a following though warmth and enthusiasm; for both food and camaraderie.
“If you go to somebody’s house and they have a really awesome spread of food out and a bunch of drinks: you’re kind of enjoying everything but really enjoying each other. We want to create that,” Raimondi said.
“Listen, this is a great job,” he added. “We get some really cool shit all the time and there’s nothing better than… I have whiskey at home I never drink unless people are there. The reason why is, it’s just better with other people, and if someone else can get excited about it, it sort of validates it, but at the same time, it’s the reason we’re really here, you know?
“So, we want people to trust us as quickly as possible because we want you to have the next new thing that we think you’ll enjoy.”
For more info on The Dapper Goose check out their Instagram and Facebook.