New: Britesmith Brewing Opens Its Doors in The Heart Of Williamsville 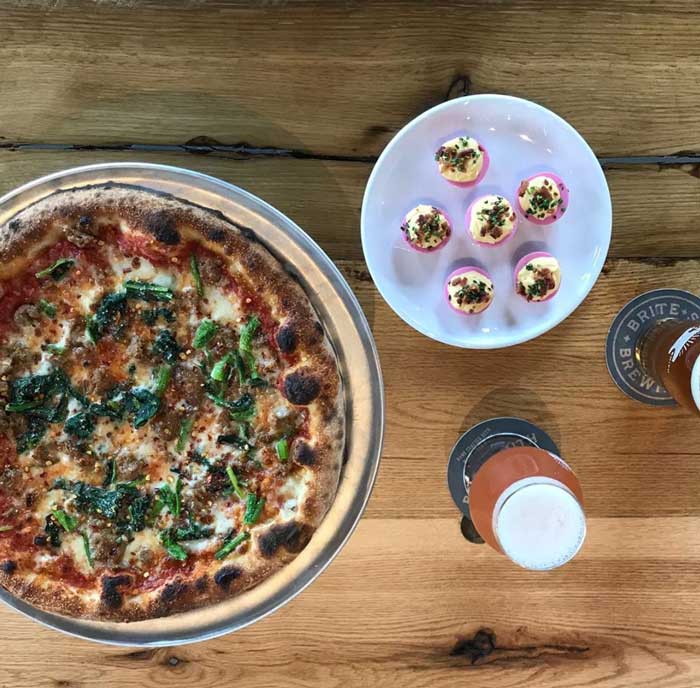 Now, it seems like everywhere in Western New York there’s a local brewery within bike-riding distance – and that’s a good thing: Lyfts to downtown and back aren’t cheap youse guys.

The latest brewery to pour open its doors is Britesmith Brewing, located on Main Street in the Village of Williamsville. Sat on the south bank of Ellicott Creek and located in an old blacksmith shop, Britesmith Brewing pairs craft brews with great food and brilliant views. Essentially an upscale restaurant with a big in-house brewing program, the new Britesmith Brewing is a far cry from the food-less, old industrial garage breweries that were de rigueur just a few years ago.

Nate Root, the director of operations for Britesmith, recently told us the space and location were both integral to the creation of the new brewery. There’s a long bar that greets you upon walking in and an open kitchen beyond that. There’s also loft seating and a soon-to-open patio space out back.

“We wanted to keep a lot of the natural integrity of the space itself,” Root said. “We have one wall with windows overlooking the creek that has this great brick on it, a lot of hardwoods and concrete. We actually got down the original concrete floors (during renovations); and it has this nice large aggregate in there.

“The family from the blacksmith’s shop actually reached out to us, as we were doing the build-out, and they couldn’t be more happy to see what’s going on with the building. They sent us a lot of old artifacts and tools that were used in the building at one point.”

The new brewery is the latest project from the owners of Oliver’s Restaurant and the Creekview Restaurant, which is a stone’s throw away — right across Ellicott Creek. With that hospitality pedigree, it probably shouldn’t surprise you to learn that Britesmith is a well-run operation featuring upscale service and expertly made food and drink. 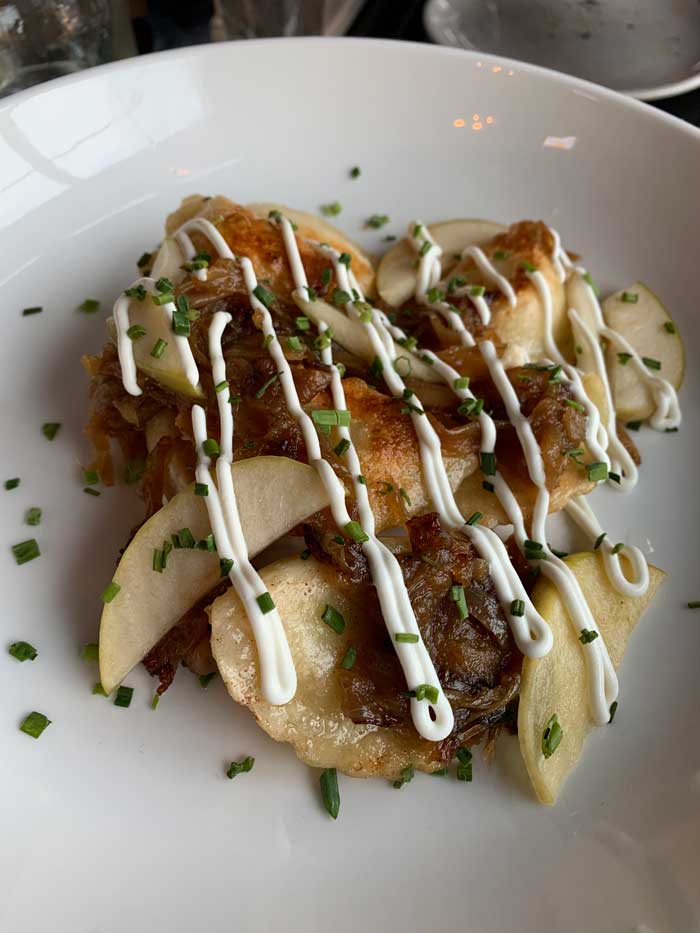 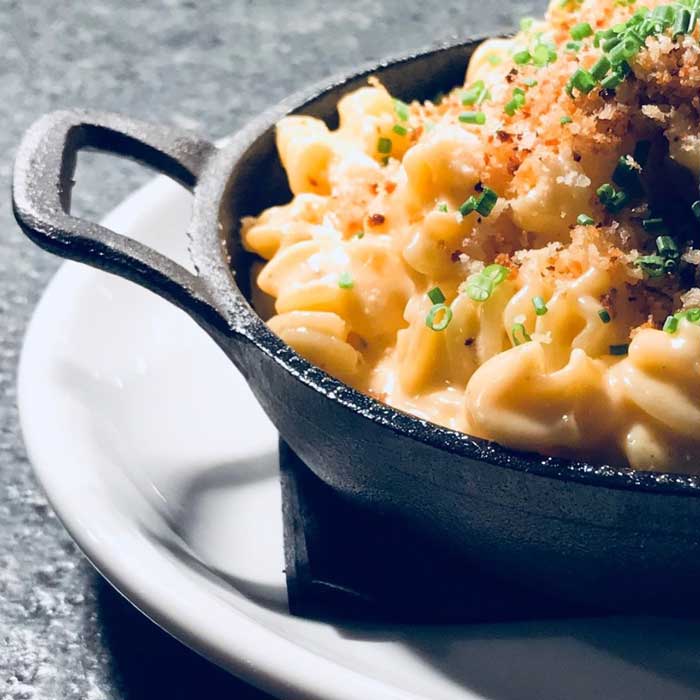 Created by Ross Warhol, head chef at Oliver’s, the menu features wood-fired pizzas, bar snacks, sandwiches, wraps, salads and entrees. The food we sampled on our visit was well-seasoned, but we found Chef Warhol’s range of textures was what really stood out. The Margherita pizza ($13) we tried was spongy, chewy and featured a crust that had a cellophane crispness. Our sweet and savory, pan-fried farmer’s cheese pierogi (7 for $12) were crispy, crunchy on the outside and creamy in the middle. 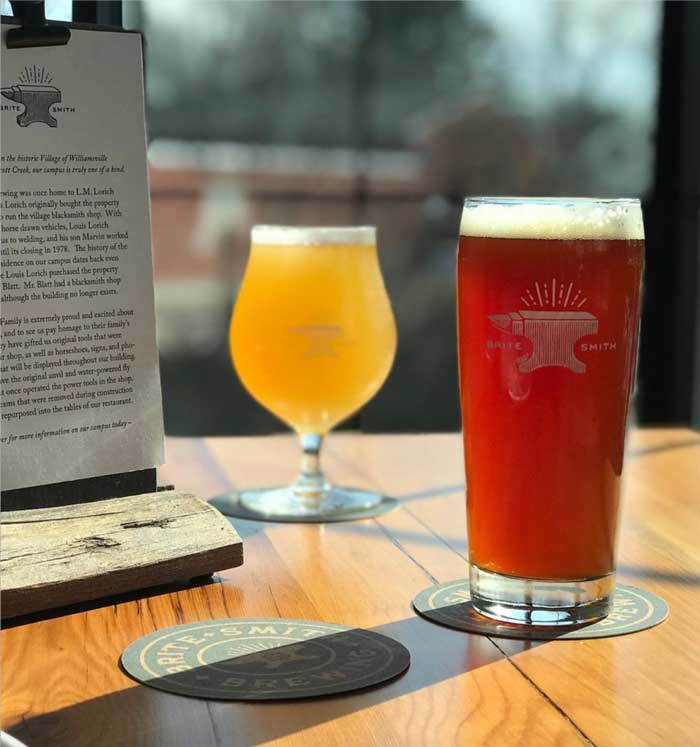 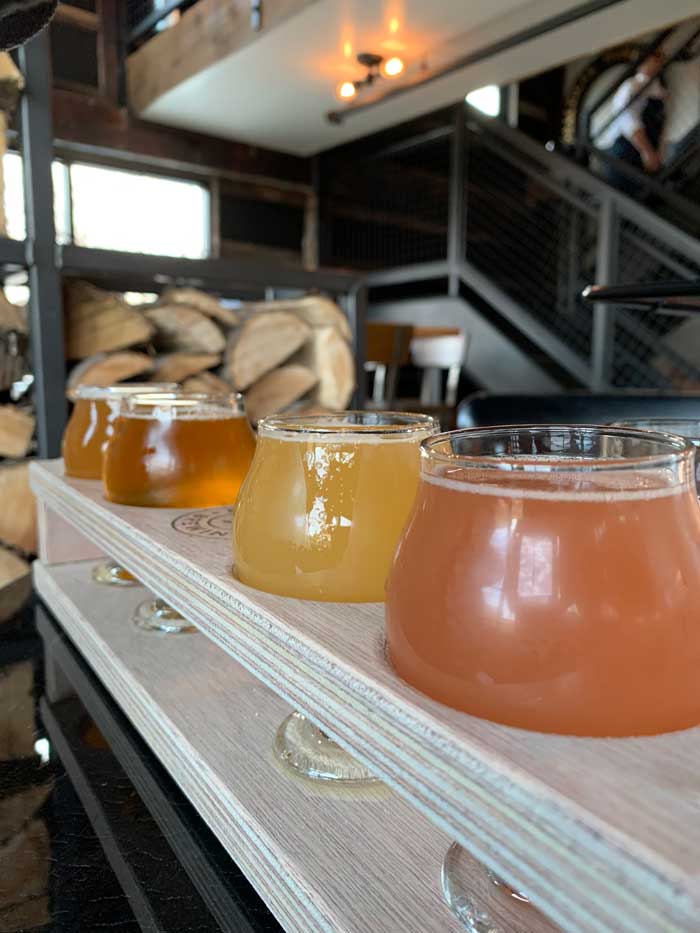 Lest we forget, this is a brewery. All six of the house-brewed beers we sipped skewed toward a dry and subtly spicy flavor profile, which is definitely unique for our area. Importantly, the beer paired extremely well: The dryness tended to have a palate scrubbing effect that brought out subtleties in our food, which is something you won’t get from trendy palate-pulverizing hop bombs.

In addition to the house-brewed beers, there are lots of other local and big name craft available. For those who want to skip beer, there are wines, cocktails and soft drinks.

You’ve probably heard that there’s a ton of camaraderie among local brewers, and Britesmith was recently welcomed into the fold with a collaboration — as is the tradition. Made with Belt Line Brewery, the Village Livin’ IPA was a product of the relationship between Root and Belt Line partner Greg Baker.

“Greg Baker and I have been friends for a while, since before either of us were involved with breweries,” Root said. “Our brewers came up with this great West Coast IPA, and it was a really nice way to get ourselves out into the community.”

After all the renovations, all the staff training and all the brewing, Root said his team is excited to finally show off what Britesmith is all about.

“We’ve been working hard all summer,” he said. “We can’t wait for the public to come out and see what we’ve been able to do. Hopefully, we’re able to create one of the better brewpub experiences in the area.” 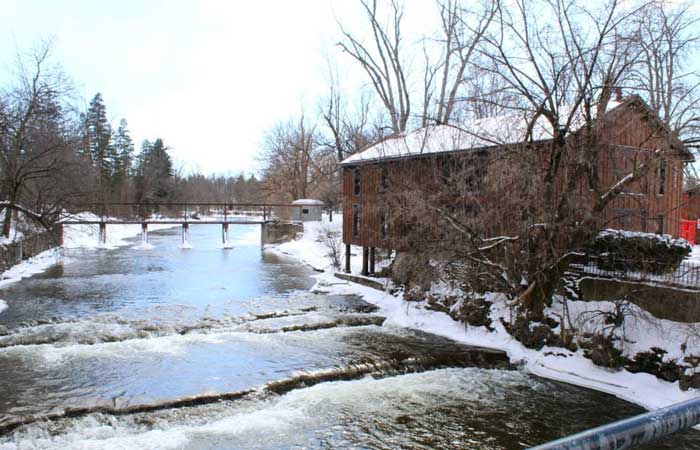