Marked by a slew of banks, good-looking people in suits and a massive golden dome, perhaps nowhere in Western New York evokes the hustle and bustle of the 80s more than Main Street in downtown Buffalo.

Do you like Phil Collins? I’ve been a big Genesis fan ever since the release of their 1980 album, Duke. Before that, I really didn’t understand any of their work. Too artsy, too intellectual. It was on Duke where Phil Collins’ presence became more apparent.

Based on its opening menu, Flint is probably going to be the most eclectic option of all the Main Street restaurants; all of which have a big interest in serving the surrounding offices. If you like scratch baked goods from a stone hearth, coffee roasted in-house and craft cocktails, there’s a lot to like here.

Stepping into the space, you’re immediately struck by just how 80s it is: a script logo, houseplants, minimalist furniture and pastel colors. There are also 20ish-foot ceilings and a million-dollar view of the reflecting pool (or ice rink) and Fountain Plaza’s functional minimalism. The overall effect is a mini-escape, something you crave at lunchtime if you’ve been cooped up in a cubicle or an office all morning.

…when Sports came out in ’83, I think they really came into their own, commercially and artistically. The whole album has a clear, crisp sound, and a new sheen of consummate professionalism that really gives the songs a big boost.

We recently ordered some takeout online through the Flint website, which lets you pay ahead and schedule a pick-up time for a quick-in, quick-out. The vegetarian bean chili ($6) we tried was the ideal warm and hearty bite on a chilly November afternoon. Our house-made everything bagel with smoked salmon, capers, cream cheese, jalapenos and red onions ($9) was the sum of its parts and checked all the right boxes. We found Flint’s take on the Szechuan classic mapo tofu was non-indulgent and spicy-as-expected, featuring the painfully numb pleasure of Szechuan peppercorns.

As for the house-roasted coffee, our cortado ($3.50) was based on a nutty, slightly smoky espresso. The house-roasted coffee ($2.50-$3.50) was easily one of the better cups you’ll find in downtown Buffalo. Those who don’t want coffee can opt for Gale’s Root Beer, sparkling water, coconut water or several different flavors of La Croix.

A big part of Flint’s mission is sustainability. All of our takeout utensils and containers were recyclable. For people who don’t want to navigate online ordering, there’s a large refrigerator grab-and-go case filled with salads, sandwiches and snacks. A fresh baked goods area with cookies, scones, and apple crumb cakes is there for those who want something sweet. According to reports, Flint will eventually feature classic cocktails, craft beers, and wines at its modest bar.

Clearly, there’s a lot to dissect here. If you work downtown, you’d be utterly insane to not give Flint a try — especially if the pressures of your workday have you on the verge of frenzy, a borderline American psycho. 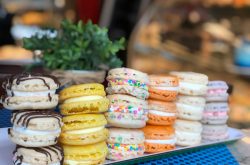 Chrusciki Bakery combines old-world European treats with modern-day fare to bring you a unique flavor experience. Our bakers can provide custom cakes…
.
Change Location
To find awesome listings near you!