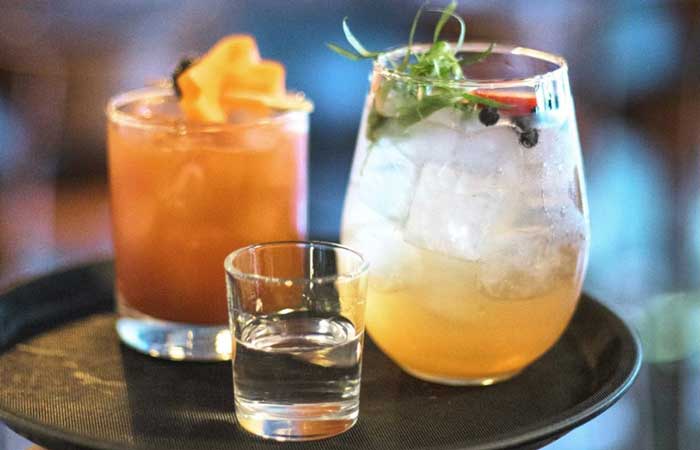 Finding success with both a modern corner bar concept in Ballyhoo and the whisky palace known as Lucky Day, Buffalo restaurateur Tim Stevens is looking for a hospitality hat trick with the opening of Graylynn – a brick-and-mortar meditation on gin and gin cocktails.


Nestled at the corner of Main Street and Genesee, next to Buffalo’s iconic gold dome, Graylynn is a bistro, a food market and a literal gin mill all rolled into one. Stevens told us the complex concept was born out of the idea to fill specific niches: In that stretch of Main Street, office workers may be looking for anything from an upscale lunch break, to a grab-and-go sandwich, to an afterwork cocktail.
Thinking back on his strong history in hospitality operations, Stevens said the key to a successful restaurant concept is “you don’t shove a square peg in a round hole. You gotta see exactly what concept belongs where.” 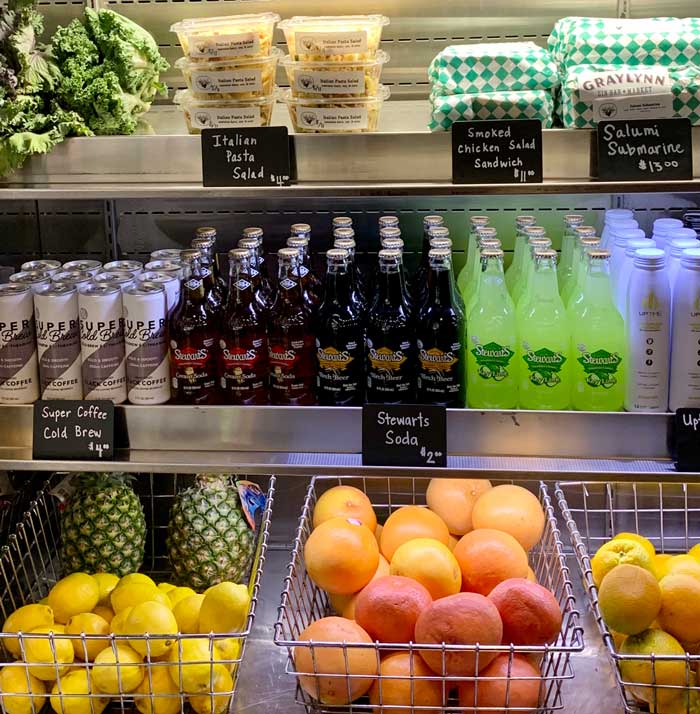 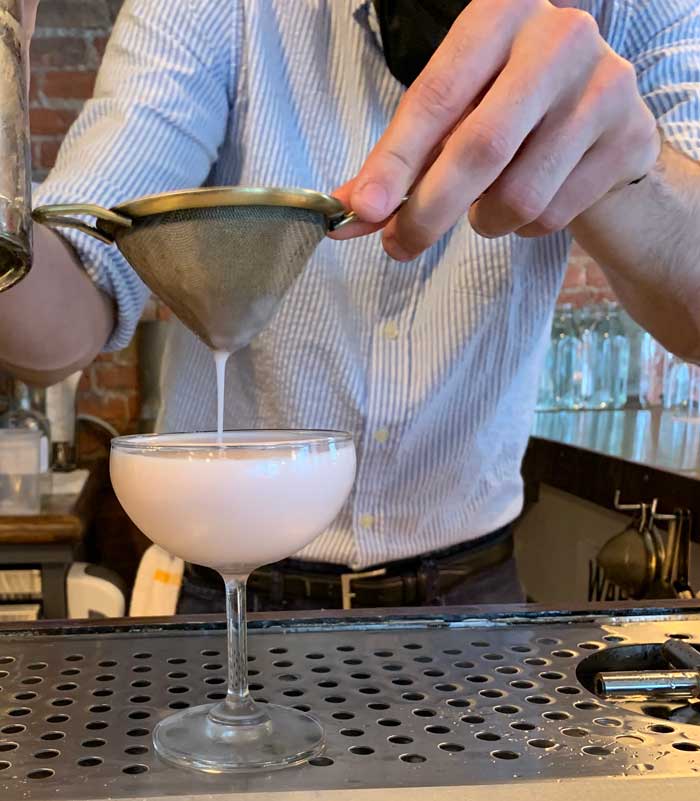 In Graylynn’s multi-pronged concept, gin is front and center. All kinds of gin have been popping up with the recent craft distillery boom, and many newer gins have flavors that go far beyond the traditional juniper notes. The results, some would say, have been mixed.
Stevens said his Graylynn team is focused on curating gins that are more rooted in tradition than novelty.
“Gin is a quick distillation,” he said. “For a new distillery looking to get a quick product out – gin doesn’t require the barrel aging that whiskey does and it’s not as expensive as rum because you don’t need those sugars. So, it’s kind of a point-and-shoot thing for many distilleries. We try to be respectful (of the craft) and we’re not trying to disrespect any distilleries that are giving it a shot, but we are sticking to what we know to be tried and true.


“The baseline gin that everybody knows is London dry gin,” he noted. “So sticking to that as a guideline, we look at what new gins are having fun but not outside the definition. My priorities in curating gins are, not having a lot of artificial flavors; or liquors that, if you tried without me saying a word, you would not identify as gin.”
Made with different herbs, or ‘botanicals’, gin plays well with culinary ingredients and the Graylynn cocktail menu definitely has a full-flavored, culinary bent. On our visit, the Inner Beauty cocktail was smoky and robust; almost like a Tex-Mex barbecue dish, featuring hints of mustard, cumin and turmeric. Our Earl Grey gin and tonic shipped a heavy tea flavor draped over a backbone of gin. 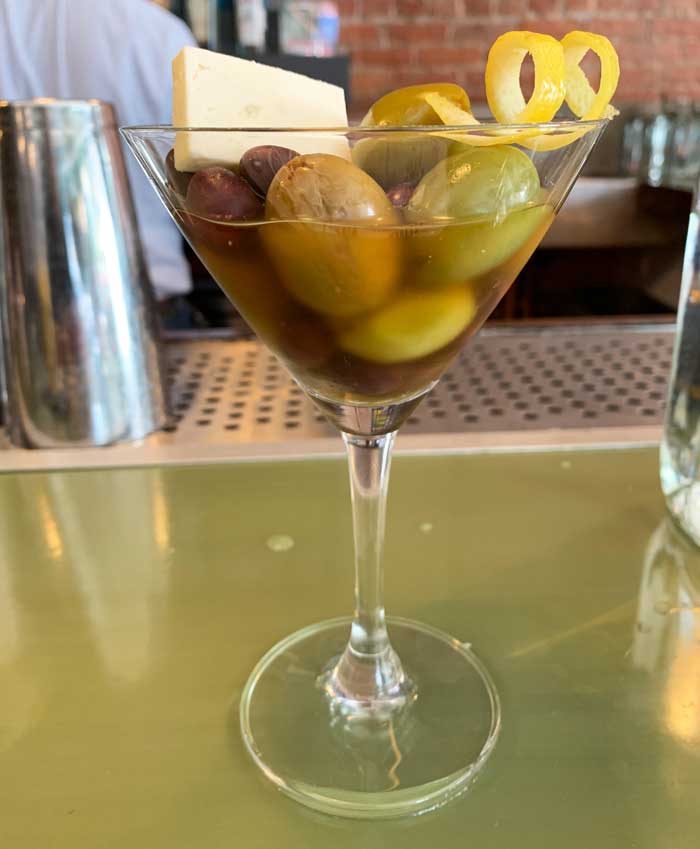 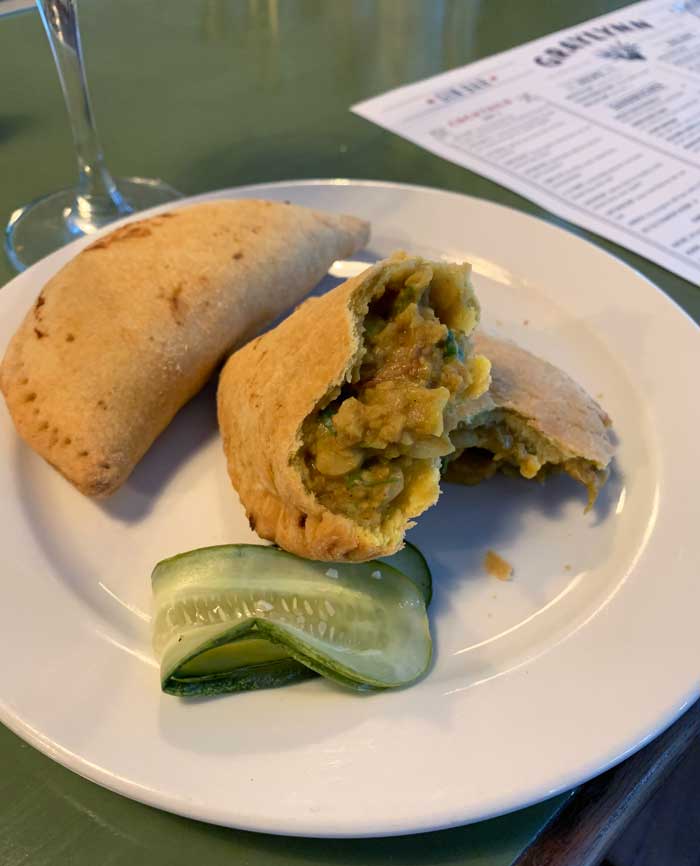 The opening food menu at Graylynn had strong European influences and tended toward lighter fare: ceviche, rillettes, pretzels, and pasties. We tried martini olives, which were marinated in vermouth and gin and served with feta. They were briny and delicate – a contrast to the full-flavored cocktails. The chana masala pastie ($11) we tried had that classic Indian flavor enveloped in a flaky pie crust.
Even though it isn’t a massive space, Graylynn features a range of settings. Natural light floods in from large front windows to highlight the vegetal design and color scheme, but the back of the restaurant has a cozy nook filled with booth seating. Outside, classic Buffalo architecture towers over Graylynn’s patio chairs and tables. On our visit, a new-school jazz playlist could be heard swinging both inside and outside the restaurant, providing a chill, cosmopolitan vibe.


Emphasizing usefulness for the surrounding neighborhood, the new restaurant stands in stark contrast to the high-concept, Insta-ready escapism at Misuta Chows, located just a couple doors down. Stevens said he hopes the variety of concepts along this stretch of Main Street help to make the area more vibrant as a social destination.
“That’s the goal, to connect the dots all the way down the street,” he said. “On our side, there’s a lot of prime locations. Next to us, there’s one for rent that’s pretty turnkey. But it’s all about working together, being good neighbors, being good tenants and then I think we can get to (a more social Main Street).” 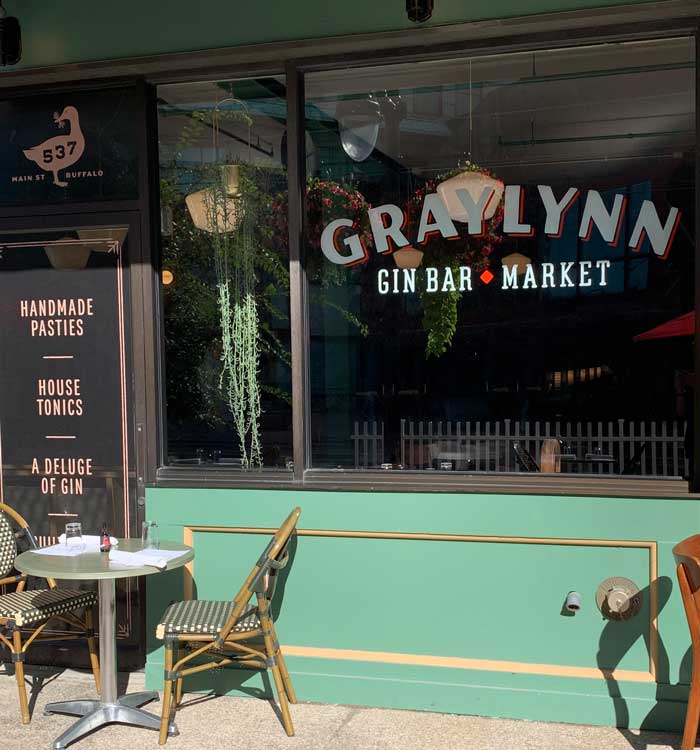 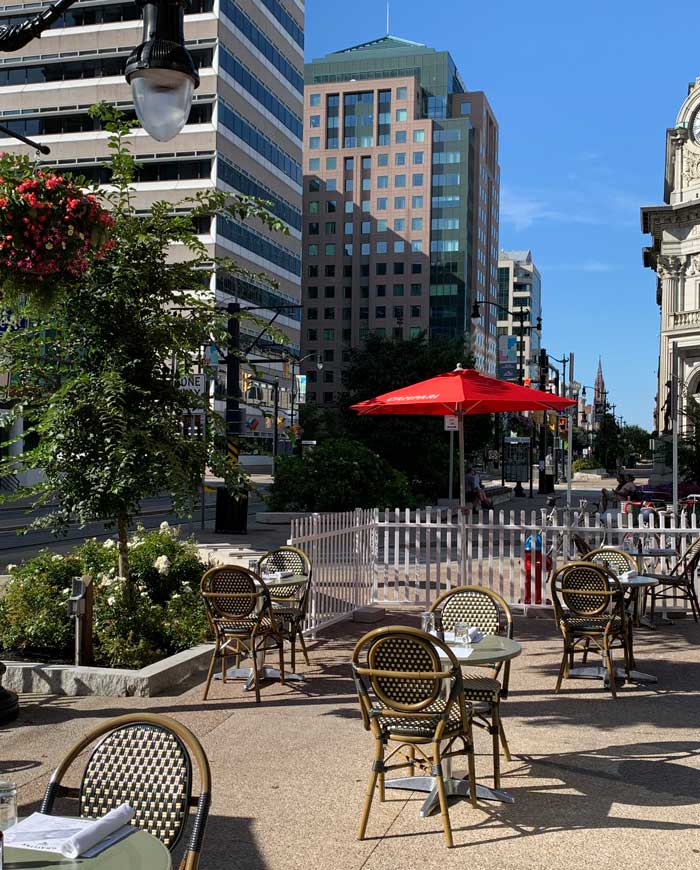 He said he hopes Graylynn can be the type of anchor tenet that appeals to a broad cross-section of people.
“Getting people to come into your business, open their wallets and spend their money with you is as much a psychological effort as it is a research project on how to fill that void in the neighborhood,” he mused. “(At Graylynn), we don’t want to have a spectrum of clientele that is too narrow. The more people we can appease, the more people we can satisfy with what we’re offering – the greater our success levels will be. That’s simple math in my mind. I don’t want anybody coming in and not seeing anything that works for them.”