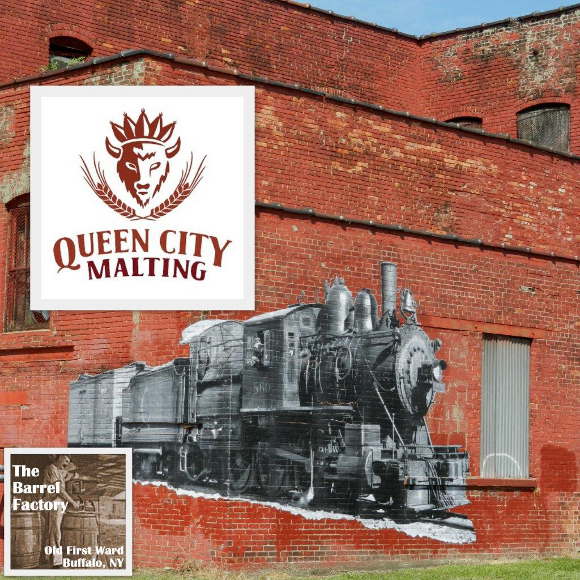 With the recent increase in micro breweries popping up around Western New York, the news of a new Maltster in town is not all that surprising. It is, however, very exciting! Read on to learn all about Queen City Malting, Buffalo’s first active maltster in decades.

Buffalo, NY – A once-iconic industry is returning to Buffalo this fall with the launching of Queen City Malting. The start-up will be Buffalo’s first active maltster in decades when it begins operation at The Barrel Factory, a 110-year old landmark currently undergoing renaissance in the city’s Old First Ward.

Maltsters prepare grains, like barley, wheat, and oats, so that they can be used by breweries and distilleries to make beer and spirits.  With the explosive growth of new breweries and distilleries in the city and region, there is certainly a rapidly increasing demand for malt.  Queen City Malting’s focus will be on using top quality, sustainable grains from local New York State farms.

Queen City Malting will be the first resident business in the Barrel Factory.  Steve Bystran, Managing Member of Lazarus Properties, which is redeveloping the historic factory building, is thrilled about the announcement.  “Queen City Malting represents another important return to the grain-based heritage here in Buffalo and its Old First Ward,” he said.

In addition to Queen City Malting, the Barrel Factory will also be home to a new micro-distillery, and Lazarus Properties is in talks with several breweries interested in expanding their operations and local presence.  The co-location of maltsters, distillers, and brewers in the same building will certainly make The Barrel Factory a destination for anyone interested in grain or in locally-produced beverages.  Discussions are also underway to sign additional artisans and local producers including a coffee roaster, cheese maker, special event caterer, and a perfumery.

Lazarus Properties closed on the property on July 11th, and has cleaned up the grounds and parking areas which were heavily overgrown. Roof repairs are now underway.

In late August, Old First Ward artist Chris Kameck completed a nearly life-sized mural of an Erie Railroad steam locomotive on the outside of the historic structure.  Long known to locals as The Barrel Factory, the 45000 SF, multi-level brick structure housed the Quaker City Cooperage Company for many decades.

More information on The Barrel Factory is available on the building’s website at BarrelFactory.com and on Facebook.