For those who’ve never heard of it, it probably sounds other-worldly.

For others who’ve been following Misuta Chow’s, the restaurant-arcade opening mid-July at 521 Main St., it sounds like a quarter sliding into the slot of an arcade machine.

Owner Johny Chow — along with business and life partner Christi Allen and executive chef Dunbar Berdine — are transforming two floors of the 500-Block building into a place unlike anywhere else. With an atmosphere inspired by Tokyo City’s yokochos (sidestreet alleys), the team is bringing two bars, an arcade and restaurant under one roof.

Chow, a Buffalo native, is the bassist for alt-metal band Stone Sour. He’s toured the world with the band, including five stops in Tokyo. For him, this isn’t just a restaurant-arcade — it’s an experience for everybody.

Visitors will be immersed in a Japanese, pop culture-infused atmosphere. Staff will be dressed in attire inspired by Harajuku fashion. The open kitchen has bar-style seating around it, where you’ll be able to take in the faux-building edifices, the kimono shop, cherry blossoms or make a call on the working pay phone.

A Hello Kitty-inspired stairway leads up to the second floor, where comic book cover recreations, a David Bowie mural, and vintage stickers adorn the walls. A VIP table, private karaoke room and DJ space await visitors on the second floor. A third-floor private club and bar are possible future plans.

Creating all of the aforementioned features was no easy task. Chow said they’ve hit a few road bumps while trying to open:

“It’s not just throwing paint on four walls and throwing up a bar, having frozen pizzas come out of the oven or chicken wings and roast beef — and like I said, I love it, but we just want people to have an amazing experience here. Just something that is off the beaten path for Buffalo, something that’s not a normal Buffalo type of restaurant experience.”

Berdine said the great attention to detail is part of the reason Misuta Chow’s hasn’t opened yet. They’ve been in the fairly old building for about a year now, its age causing some setbacks beyond their control.

“I think they’re [visitors] going to be surprised a lot,” Berdine said. “Every little corner of this place has something going on.” 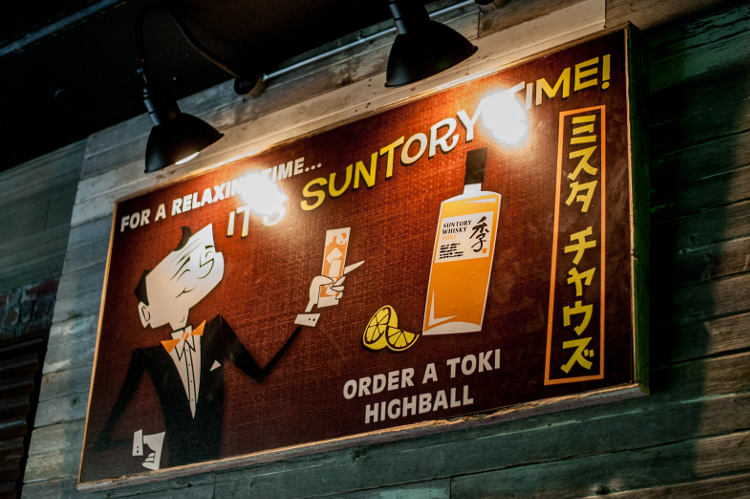 To those who’ve been patiently waiting, Chow said:

“Thank you for your patience. I know it’s frustrating. It’s been more frustrating for us because we’ve been doing this for as long as we have, and we really want to bring this here and crack those doors open. But just hang tight [and] soon enough, we’re hoping that your socks are knocked off when you walk through the doors.”

While visuals are going to be a big part of the experience, consistency in service is key. The menu will use fresh, locally-sourced ingredients.

Custom bento boxes will be ready to order for dining in, to-go and delivery. The build-your-own boxes will give customers choices of “organic vegetables, egg, rice, noodles and dumplings; bahn mi sandwiches with braised or poached proteins and vegetables; steamer baskets with nikoman dumplings, potstickers and edamame; custom built lettuce wraps with a variety of protein and vegetable combinations to choose from, all locally sourced, organic and hormone free when possible,” Berdine said.

He said sushi, Miso soup and Japanese street food — like takoyaki (fried octopus balls) and grilled chicken skewers — will also be on the menu. There probably won’t be any Buffalo-themed food, although there will be a spring roll filling-stuffed chicken wing on the menu.

Sure, maybe there won’t be Buffalo-themed food, but there will be something many Buffalonians are familiar with: beer.

There will be 16 taplines primarily dedicated to beer, including craft, Japanese, and “what’s in your dad’s fridge,” Chow said, like Pabst Blue Ribbon, Miller High Life and Genesee. Classic cocktails, whiskey, bourbon, shochu and sake selections will also be available, along with sake-infused specialty drinks and cold-pressed coffee.

On top of that, Misuta Chow’s will have the only Suntory highball tap tower in Buffalo — one of 33 restaurants in the entire world. There will even be three Suntory Toki taplines, two downstairs and one upstairs. Brooklyn Kura will have their signature American craft sake available as well. They’ll be teaming up with Community Beer Works to release a custom label in the near future.

While the bar and food menus seem incredible, there’s going to be something for the kid in everyone. Orange Crush, Dr. Pepper, Original NY Seltzer and TaB will all be available. The arcade, which will be maintained by Western New York Arcade and Buffalo Pinball, features titles like Pac-Man, Donkey Kong, Space Invaders, Tron, Rampage and Centipede. There’s five pinball machines and two skee-ball machines, too, which weekly tournaments will be held on.

Chow said children are welcome to see what the restaurant and arcade have to offer. Misuta Chow’s will host karaoke, parties (including birthdays) and events in the future. They’re even sponsoring Hertel North Park Youth Baseball League.

“As long as parents are coming in with their kids and not just dropping them off, I think this would be a great place for a parent to sit here and have a beer or a glass of wine, and let their kid play on the skee-balls or the pinballs or one of the cabinet games,” Chow said.

What about the name?

“Misuta is ‘mister’ in Japanese. It’s a nickname I got when I was a younger kid growing up in Buffalo.”

Along with his music, Chow and Allen helped open and run Allen Burger Venture before focusing on this idea. For Chow, Tokyo always fascinated him:

“For me, it’s just so different. It’s so out there and wacky. It’s just that dichotomy of the very old school which meets the very new school. I love that and I love the attention to detail that’s used.”

The team behind Misuta Chow’s knows this isn’t something Buffalo is used to. But they’re ready to welcome anybody into their two floors of immersive experience.

To anybody “on the fence” about coming to Misuta Chow’s, Berdine said:

“Your experience here will remind you of local neighborhood restaurants that you can relate to, but there will be some audiovisual entertainment going on around you.”

“You will definitely not be disappointed walking away from here,” Chow added. “You’ll walk away with an experience. We hope all of those experiences are great and we foresee them being great, but I would just say –”

“Get off the fence, come on in,” Allen chimed in.

“Sometimes you’ve got to branch out,” Chow said. “It’s very easy to be very comfortable. To me, Buffalo used to be a very comfortable town. And I say ‘used to’ because I was born and raised here. It was easy to just go down to the corner bar and get your $1.25 Blue, and cheer for the Bills during those 16 weeks. But now, Buffalo has a lot more to offer. And if you’re not going to get off that fence or walk out on that branch a little bit, you’re going to miss out some cool stuff. Not just with us, but with everything that’s going on in this amazing city.”

TLDR; The new Main Street spot will transport you to an atmosphere inspired by Tokyo City’s yokochos (sidestreet alleys), with two bars, an arcade, and restaurant under one roof. Misuta Chow’s will have it’s soft opening for three weeks starting July 14th. Food won’t be available in the restaurant for about a month after opening.

Hours: Open all week for lunch and dinner

Patrick Koster is from Buffalo, NY, otherwise known as the land of beer, bipolar weather and wings. He plans to one day rule the world. Whenever he isn't on his quest for world domination, Patrick enjoys talking in the third person and storytelling, with a passion for news, sports, culture and anything in between. Patrick is currently working on deciphering the new language of Emoji.

Tags from the story
New Restaurants 2018 Step Out College
0
Facebook Twitter Pinterest
LinkedIn Email
Written By
Patrick Koster
More from Patrick Koster
Rent a kayak, take a kayak tour, or launch your own from...
Read More

Are you a local business or organization who wants to add a Covid-19 Community update?

I Love My Park Month at Knox

In the past two months attendance has doubled and tripled at the Park. In May The Friends of Knox are saying THANK…
.

The Step to Accept Challenge is a nationwide virtual run/walk/ride. You'll participate from wherever you are, doing whatever you want to do…
.

For the first time ever, we are excited to announce that the Great Plant Sale and the Bulb Sale will be taking…
.

My Dad's Bar & Restaurant is full service. We offer diners dine-in, carry-out Breakfast, lunch and dinner. We offer a diverse menu…
.
In: Everywhere
Change Location
To find awesome listings near you!
X