Located in the massive new Delaware North Building, Patina 250 is the Buffalo-based hospitality company’s first foray into upscale dining and will likely going to be the gateway through which many high profile corporate visitors step into Buffalo’s current culinary scene.
The bar-restaurant has a “big city” feel to it, with its high ceilings, large lounge area, minimalist artwork, modern furnishings, and open kitchen. It’s a grand stage, to be sure, and Patina 250’s head chef Homer Ford told me he’s looking forward to the challenge of repping Buffalo to the well-heeled guests expected to come through his doors.
The menu is best described as New American with a Buffalo flair. At a recent media event, the press was presented with sample dishes that included crispy cauliflower, Buffalo popcorn, housemade pierogi, and a poke bowl.

Crispy fried cauliflower has been making a lot of appearances on local menus lately, and for good reason. When battered and fried, the vegetable offers a soft crunch and smooth nuttiness that both serve as a primed canvas for any manner of dressing. At Patina 250, Chef Ford spilled hot sauce on it like a drunken Jackson Pollock, and the result was crude, but effective beauty.
Pierogi is a Buffalo staple, and the potato-and-leek ones on offer at Patina 250 would do any Polish grandma proud. For me, the fried dumpling’s Northeastern European flavor profile immediately evoked childhood memories and tasted like something you could have ordered at the Perrault-era Aud Club. While the pierogi itself was delicious in its own right, the caraway-spiked housemade sauerkraut was the Ron MacLean to the pierogi’s Don Cherry: an oft-overlooked foil that would be missed immediately if taken away. 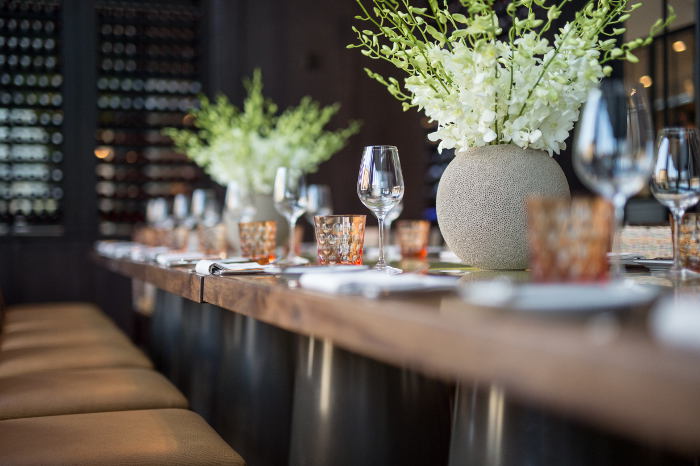 Poke is definitely not a Buffalo food staple, but thanks to the Delaware North resources at Chef Ford’s disposal, he can overnight some very fresh seafood to his restaurant, and he’s clearly taken advantage of that here. Sweet and savory with the unmistakable finish of fermented soy sauce, the poke bowl featured the soft, slippery texture of raw tuna. Add in some raw jalapeños and chopped jicama for a bit of crunch, and you have an indulgent bar snack for the sophisticated eater.
Patina 250 will also be offering craft cocktails, but don’t expect a lot of small batch spirits and forward-thinking bitters. At the media event, the bar was stocked with top shelf products from popular macro distilleries. Made with tequila, lime juice, St. Germain, and grenadine, the Sunset Over the Falls cocktail I ordered was exactly the sum of its parts.

The restaurant is going to change its menus with the seasons and with a lot corporate clients expected, and you’re probably thinking that means conservative offerings. However, as evidenced by the poke bowl served at the preview event, Chef Ford told me he plans to serve up some progressive dishes as he gets more comfortable in his new digs.
“We’re going to start being approachable, and then every once in awhile, we’ll throw a curveball,” he said.
Does that mean he’ll being offering dishes for the more adventurous eater, I asked?
“I’m not scared of adventure,” he replied.
For more info on Patina 250 head to patinagroup.com and follow them on Facebook, Instagram, and Twitter.