When you think of iconic Western New York food brands, names like Anchor Bar, Weber’s, and Perry’s Ice Cream probably come to mind.
Ru’s Pierogis is set to make a serious run at being added to that list, launching a food truck, restaurant, and production facility this fall.

The restaurant, which officially opened earlier this week on October 14th, is a fast-casual affair with a counter service experience similar to the one found at burrito joints like Salsarita’s or Moe’s. You walk up, order your food and shuffle to your left to watch your order being prepared and to give input regarding toppings.
On a recent trip, I ordered the Banana Pepper, Chicken Wing, Potato Ricotta and Cheddar Potato pierogi. Each fried dumpling was about the size of a box of Tic Tacs and they came in two different textures. Fried in hot oil, the Banana Pepper and Chicken Wing pierogi had flaky and delicate exteriors. The sautéed Potato Ricotta and Cheddar Potato pierogi had hard thin crusts where they had rested against the hot cooking surface. 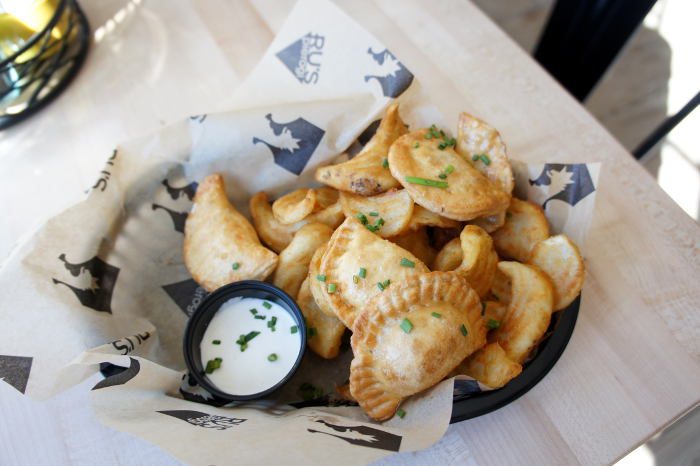 The fillings of the traditional pierogi (Potato Ricotta and Cheddar Potato) tasted familiar and gave the same impression as warm blanket slowly being gently draped over your body. Ru’s more modern pierogi (Banana Pepper and Chicken Wing) had fillings with a gently spicy kick that cut against a hearty cheesiness.
In addition to seven different kinds of pierogi, Ru’s restaurant also offers sandwiches, a salad, and sides.
After visiting the restaurant and recently touring the factory, it’s hard to believe that the entire thing all started with a few pierogi recipes from co-owner Andy Ruszczyk’s grandmother.
As he was starting out on his culinary career, Ruszczyk’s father suggested that he help his grandmother out with her annual holiday season tradition of making pierogi for the family.

“I went over to grandma’s house; started making dough with her, making fillings, making pierogi, making golombki, barbecue burgers, all the typical Polish stuff,” he told me.
For many Polish grandkids, that’s where the story ends, but for Ruszczyk – it was just the beginning. The chef took his newfound passion for pierogi to his job at Hoak’s Restaurant in Hamburg.
“Being at Hoak’s, I kind of had free reign,” he said. “The patrons at the bar were my guinea pigs, testing chicken wing pierogi, banana pepper and cheese pierogi.
“They didn’t have a problem with that,” he added.
Ruszczyk’s blossoming pierogi enterprise took another big step forward when Zachary Schneider, an old classmate of his from St. Francis High School, came to him with a proposition: taking on pierogi full time. 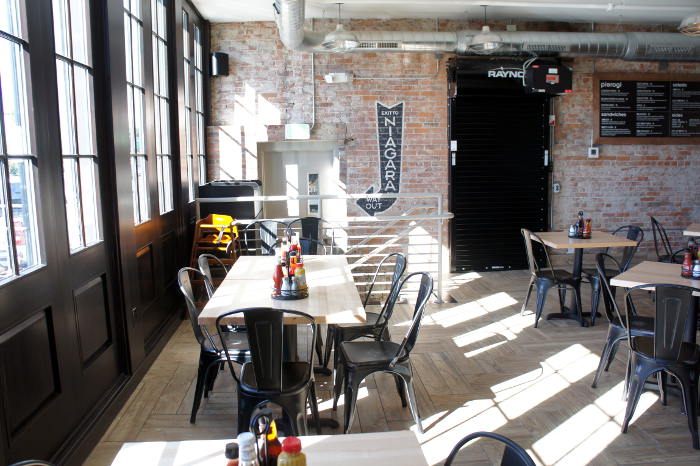 Despite the fact that Ru’s now has a food truck, factory, and restaurant, Ruszczyk told me his company has maintained both the spirit of his grandmother’s recipe and his own initial culinary experiments.
“We still make a traditional sour cream Polish pierogi dough,” he told me. “All the stuffings are made from scratch. We just make them on a bigger scale now.”
The restaurant does have a beer and wine license, and features a roster of entirely local beer. Like other alcohol-serving fast casual restaurants (think Lloyd Taco Factory), the vibe is family-friendly, but lively; classic rock pumped away in the background and there’s an internet jukebox. A bay of front windows let in a ton of natural light beam in from Niagara Street.

Located right next to the I-190 exit on Niagara street, Ru’s is perfectly situated for a stop off on the way to the game or concert. With the pierogi factory out back, you can also grab a box of pierogi to go – a sure-fire way to make you the most popular person at your next party.
For more info and to keep up-to-date with Ru’s operation go to ruspierogi.com and follow Ru’s Pierogi on Facebook, Instagram, and Twitter.