New: Steak is a Science at SEAR 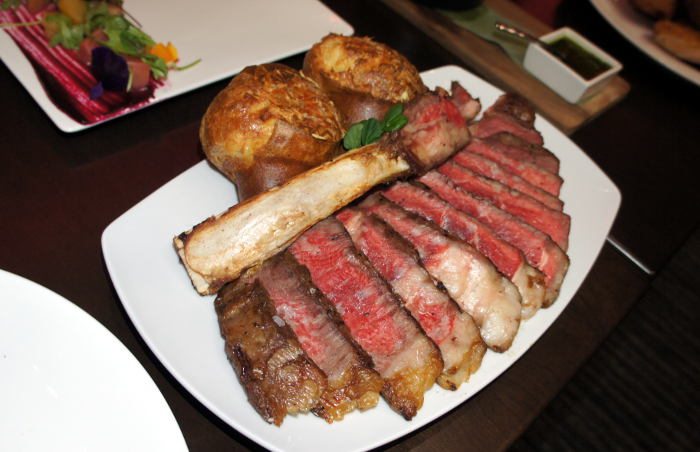 This past two years have been a tremendous boon market for restaurant openings in Buffalo and we, the consumers, are the huge benefactors. Just when you thought it couldn’t get any better –  SEAR Steakhouse opens in the Avant building on Delaware Ave.
SEAR is based on a new restaurant concept that was one of the few left out in WNY, the modern steakhouse. New school steakhouses trade the dark-stained wood, candlelight atmosphere and traditional meat-and-potatoes cuisine of yesteryear for modernist décor, swaths of natural light and fresh, modern food. Don’t worry though, you can still get a big, juicy cut of beef.
This restaurant venture marks the first collaboration between some of Buffalo’s best: restaurateur David Schutte of Oliver’s and Creekview Restaurants, former Buffalo Bills running back Fred Jackson, cornerback Terrence McGee and punter Brian Moorman, David Anderson, President and CEO of Blue Cross Blue Shield, Dave Pietrowski, President of LoVullo Associates and Ron Raccuia, President of ADPRO Sports. 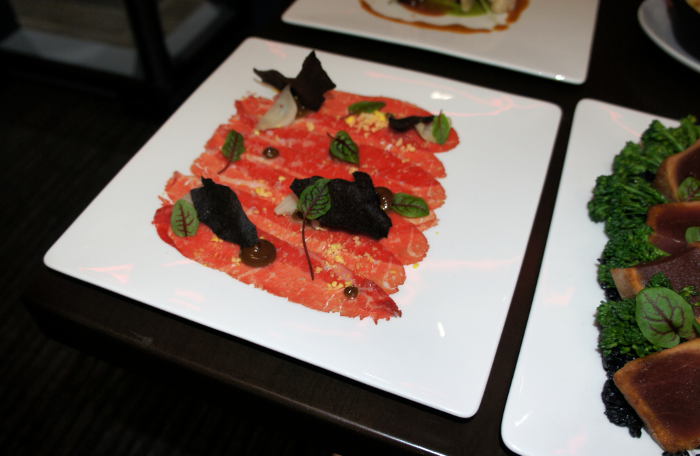 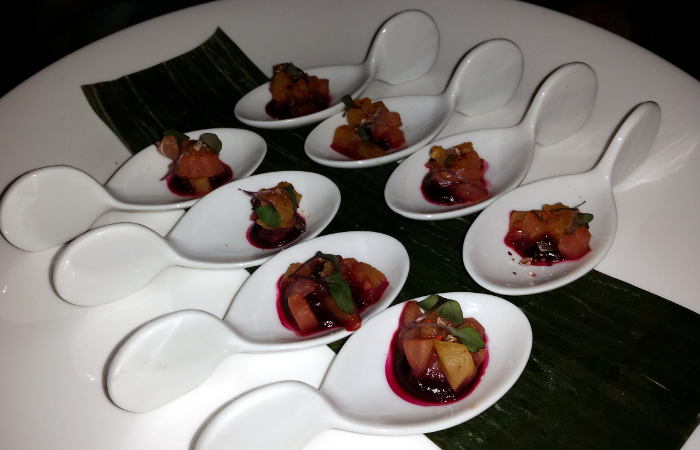 SEAR is more than just ‘big city flash’ – it’s bringing the science of steaks to diner’s plates. The restaurant’s cut selection, preparation techniques and cooking methods have all been scrutinized by the experienced eye of head chef J.T. Nicholson.
On a recent phone interview, Nicholson told me many of the cuts being served at SEAR and other modern steakhouses offer “a completely different experience and something you may not have been exposed to 10 to 15 years ago.”
“The filet is the old stand-by that everyone thinks about,” he smoldered. “It’s tender, but it really doesn’t pack the flavor of some of the other cuts because it’s not really a muscle that the animal uses very much. When you get into the cap steak, it’s more of a used muscle, so it has more of that beefy rich flavor, and it still has a wonderful texture to it.”
The cuts of beef at SEAR are available fresh, but getting a dry-aged steak takes full advantage of your dining experience as the preparation technique isn’t something you could do at home. The aging process intensifies a cut’s meaty flavor, while adding in the kind of nutty, funky characteristics you might associate with high-quality cheeses.

For SEAR, meat is wet aged in liquid for at least 3 weeks, and then dry aged in a humidity- and temperature-controlled room for another 3 weeks.
“It’s one of those things where if you do it badly, it’s really, really bad,” Nicholson stressed. “We’ve worked really hard with our suppliers to make sure it’s exactly the way we want it, it’s consistent and it upholds our standards.”
Once the meat has been prepared and an order has been placed, a steak then has to get cooked and how that’s done at SEAR depends on the properties of the cut, according to the head chef. 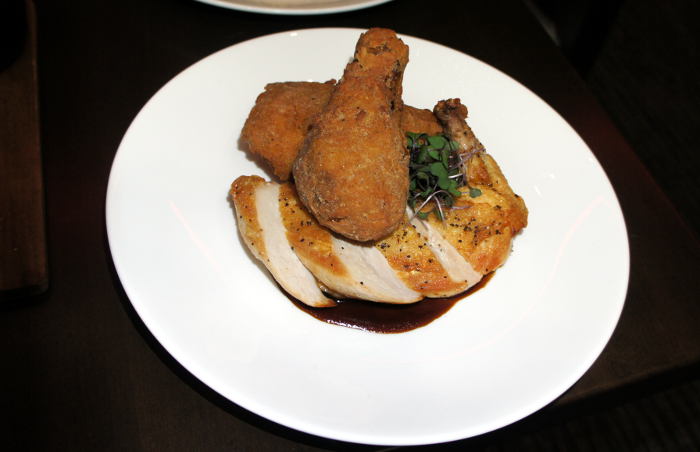 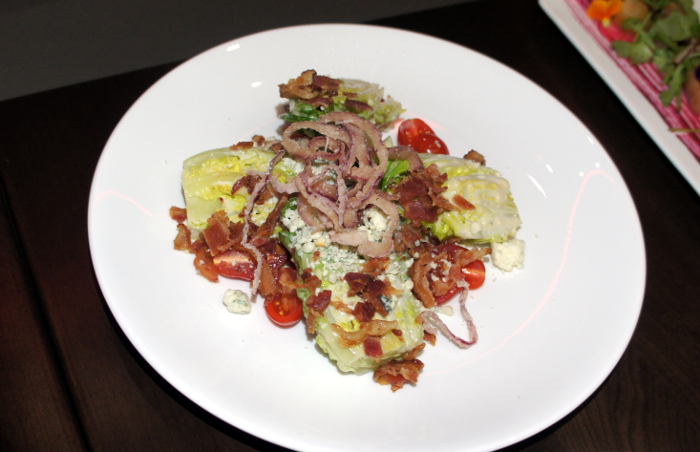 “Each cut of meat reacts to heat differently,” Nicholson said. “The way that the muscle tissue is and the inner-muscular fat is on each steak – they lend themselves to certain techniques. Your lower fat content cut, your beef tenderloin, really lends itself to getting a nice (pan) sear on it. Whereas your rib eyes, cuts from the rib loin and your sirloin cuts really lend themselves to the broiler. The high intense dry heat brings out more flavor.”
While the steaks are the main attraction, the small plate section of the menu is where Nicholson and his staff will be leveraging more of their unique culinary skills and years of experience.
The SEAR chef said the beef carpaccio dish available on the current menu is a great example of his culinary style.

“(Beef carpaccio) is pretty boring normally, I mean as good as it is, let’s face it, it’s pretty boring,” Nicholson mused. “What we’re doing is taking black garlic, which is one of my top five favorite ingredients out there, and making a black garlic aioli. Then, we’re adding a little bit of pickled cippolinis just to give it some acid, and then some local sorrel, which has that nice citrus note to it.”
“We’re just adding little elements, either putting a little twist on a dish, or updating it to the best of the best you can possibly get,” he added. 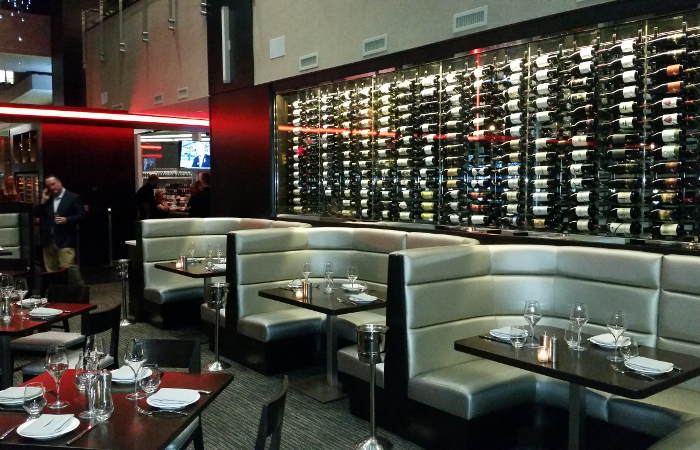 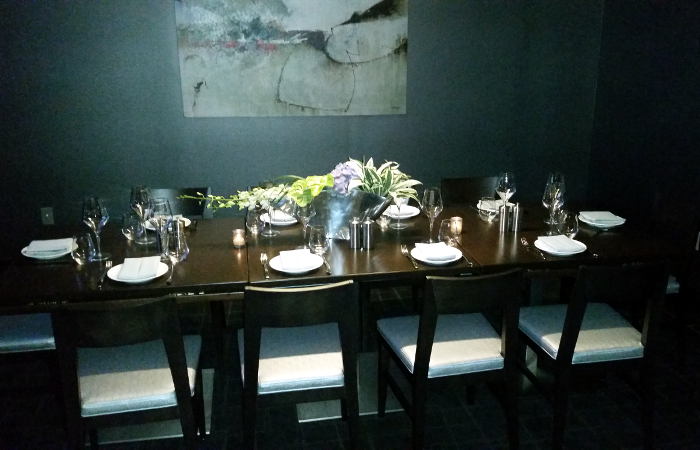 Their menu includes plenty of mouth watering dishes like: Seared Foie Gras (22 Sour Cherry, Bread Pudding, Almond); Seared Sea Bass (Parmesan Risotto, Roasted Mushrooms, Salsa Verde); Cider Braised Pork Belly (English Pea, Caramelized Fennel, Apple) to name just a few of many. Check out their menus.
In addition to the spectacular food, the open spaces and modern look of SEAR is more than enough to impress. Elegance is the first word that comes to mind. SEAR’s considerable bar area is backed by large windows overlooking West Huron and adorned with sleek beer taps and plenty of enticing spirits. Intimate booths line a raised dining area adjacent to the bar. The main dining room features 30ish foot ceilings decorated by a stunning display of light/art with one wall devoted to a wine fridge that would make any enthusiast droll with anticipation. The dining area is also illuminated by windows facing Delaware Avenue that will featured plenty of natural light in the daytime (they are open for lunch 7 days a week) and city lights at night (open for dinner 7 days a week). From here you’ll be able to step onto an outdoor dining oasis once SEAR completes their impressive patio renovation plans next spring.
For more information on SEAR and to make reservations head to searbuffalo.com and follow SEAR on Facebook, Twitter, and Instagram.