New: The Beer Keep is Ideal for Bringing “Nighttime You” Back to Life

After a year and a half of limited capacity, early closing times and now-you-wear-them-now-you-don’t face mask policy, it seems like now just might be time to, finally, just maybe, get back to proper nightlife.

Offering the Night Out holy trinity of good drinks, food and quality entertainment, the emerging 1000 block of Elmwood is the ideal place to pull Nighttime You out of cryogenic storage.

In just the past few weeks, this stretch of Elmwood has gone from desolation to destination, with Breezy Burrito Bar, the rock-centric Jack Rabbit, and now The Beer Keep, a new craft beer joint with a to-go license.

The Beer Keep might sound a bit Medieval Times, where flagons of ale are clattered together and sloppily slugged in celebration. But actually, it’s less a feudal fortification, more a Lego castle, with multi-hued murals and LED-lit beer cases. This place is supposed to be fun, I was told.

“The whole concept has evolved out of the idea that beer and socializing is supposed to be fun,” said co-owner Cory Muscato, just before the soft opening. “For a lot of craft beer places, that idea kind of fell off somewhere, and a place can feel a little pretentious or holier-than-thou.”

If we’re going to talk about holier-than-thou re: craft beer, we have to mention the elephant in the room: IPAs. What once used to be an exotic beverage — the India Pale Ale — has now become de rigueur. You can’t swing an empty keg in this town without hitting a beer hopped to within an inch of its life.

Once dissed as a “dad mentality” by Beer Geeks, you can now publicly admit to IPA fatigue, friends, and at The Beer Keep, they tacitly acknowledge that craft beer needs to get back to variety. The bar has beer taps specially designed for easy-drinking pilsners and while hi-test hops are available, the options go far beyond there. Whether it’s a world class funky farmhouse ale from Jester King or a Genny Screamer, whatever style makes you smile, they got you.

“We took the idea of fun, and applied it to the beverage program, with approachable beer, seltzers and wine,” Muscato said.

The Beer Keep might seem whimsical — like a bunch of business partners went out for a bender and opened a bar the next day — but Muscato told me a lot of research and planning went into developing a concept that would last the test of time.

“My partners and I went to 122 different spots around the state, whether it was beer bars, bottle shops, ‘combo spots’ like ourselves or breweries, to ask questions and find out what works for them and hopefully avoid the perils and pitfalls that other businesses went into,” he said. “One of the things that we saw most was people finding their niche, getting comfortable and then comfort breeding complacency. So, we’re really trying to push the envelope here; listening to our consumers as far as what they want.”

Maybe the biggest draw for customers will be The Beer Keep’s synergy with its neighbors. The result is a little nightlife strip for these somewhat less-challenging times.

“We have a really close relationship with the team over at Jack Rabbit, located on the other side of us,” Moscato said. “So, our vision is to take this block and turn it into a destination, not just for our neighbors and our community, but also for people who come in from out of town.”

The Beer Keeps opens to the public Wednesday, September 15, 2021.

The Beer Keep Bar & Shop is a laid-back hangout in the heart of Buffalo’s Elmwood Village. Post up at the bar, sit outside, ...

Brett Llenos Smith is a freelance writer based in Buffalo’s Allentown neighborhood who has been covering local food and culture for the Step Out Buffalo over the past six years. As someone with a multi-ethnic background, he has a passion for exploring and understand the many diverse corners of Western New York.
Find More ➭ Buffalo, Elmwood Village 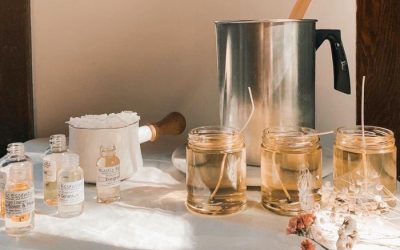 Photo courtesy of Musejar Learning and trying new things can be fun! Especially when you have a great teacher. Check out these themed classes from everything to understanding wine to crafts, woodworking, and tons more. This ultimate guide to classes and workshops...

Need a good laugh? We've got the guide for you! This ultimate guide to comedy events happening in Buffalo and Western New York won't steer you wrong. Read on for comedy shows happening this month and beyond across the area. Comedy Events in Buffalo & WNY This...