With Buffalo’s beer renaissance in full swing, Big Ditch Brewing Company has opened its Tap Room giving fans of their bold-tasting beers food and an experience to match.

In a recent phone interview, Big Ditch co-founder Matt Kahn told me that while the Tap Room will be a family-friendly place and local sports will be on the TVs, the foundation of the Tap Room is built on beer.

“It’s a brewery,” Kahn said. “So we’re there to educate and have people experience our beer. That’s really what the main focus and the concept is. It’s really a beer-focused concept.”

“It’s also a really large space so there’s a lot of different ways you can experience that,” he added.

The Tap Room is divided into three main sections. The front area features a large bar with two 12-tap towers and seating for diners located around the bar. The back area is set up in a ‘beer hall’-type arrangement, with long communal tables, a lounge area, shuffleboard and darts. An upstairs section overlooks the entire restaurant and also holds both a bar and restaurant seating.

Western New Yorkers know you need to take advantage of warm weather when it comes, and Kahn said the Tap Room will swing open overhead doors to allow fresh air in and add to the open-air vibe of a true beer hall. 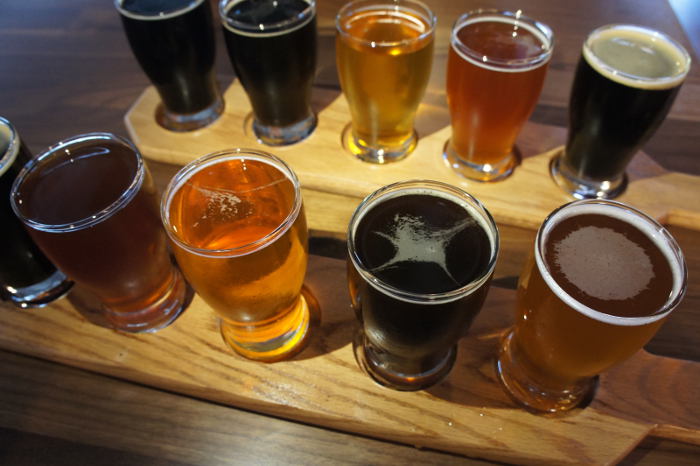 All 10 beers on tap for opening

Speaking of beer, the Tap Room will feature all of Big Ditch’s annual beers, including its Hayburner IPA and Excavator Brown Ale. Kahn said the Tap Room will also rotate through the brewery’s seasonal beers, like Vanilla Oatmeal Stout, at the appropriate time of year. Finally, the Tap Room will also feature special brews made just for that location, which at the time of opening include Galaxy Red, Golden Shovel and Lock Porter. Kahn said patrons who stopped by to fill up their growlers during the spring had the chance to sample a few pilot batches of these oh-so-secret beers.

The Tap Room also features a menu that’s beer-focused including sandwiches, shareable appetizers, flatbreads, entrees, deserts and some entrees made with beer. Kahn also told me that the Tap Room will feature products from as many local vendors as possible.

“We’ll have something where you can really fully explore beer and food year-round in one place,” he said. “A lot of places cook certain dishes with beer, but they’ll have different beers on all the time. We’re really going to try to dig into it a little bit more I guess.”

As a side note, those familiar with the brewery’s East Huron Street location know that parking can be at a premium there, and Kahn said staff will direct patrons to the parking garage over on Mohawk Street. He added that other parking solutions are also being considered.

While some may have scoffed at the idea of a Buffalo Brewery District in the past, the opening of the Tap Room firmly cements a tract of downtown, from Pearl Street Grill & Brewery all the way to Flying Bison’s new digs in Larkinville, one can see brewery tour groups treading year round.