Downtown Buffalo may be getting all the new-restaurant buzz right now, but with the one-way streets and Kafkaesque parking enforcement scheme – sometimes heading out to the suburbs just makes more sense.

Lockport’s New York Beer Project brewpub is one particular destination that has us taking a second look at the suburbs and liking what we see.

Modeled in part on New York City’s Grand Central Terminal, NYBP is housed in a brand new building assembled from around 85,000 bricks. The massive structure features many different spaces, from a communal gastropub room to a small event space capable of hosting corporate presentations.

The brewpub is located on a sparsely built section of Transit Road at a sort of suburban crossroads, right on the border between Niagara and Erie counties. This location has allowed NYBP to stake out its own territory and identity.

“We really want to make this a place where everybody feels comfortable going,” Marina Christopher, NYBP’s Director of Fun, recently told me. “We’re really trying to promote that kind of togetherness.”

NYBP’s emphasis, as the name suggests, is heavily on beer, and that idea of togetherness can be seen on the pub’s draft board and menu. The brewpub will eventually feature five year-round beers, two seasonal beers and a constantly rotating cast of trial batches and one-offs, all brewed in-house.

Assistant brewmaster Jason Crossett told me on a recent visit that the offerings will be geared to people who recoil at the mention of craft beer and beer snobs alike. The brewpub will always feature lighter pilsners and ales that will taste very familiar to the typical Western New Yorker. 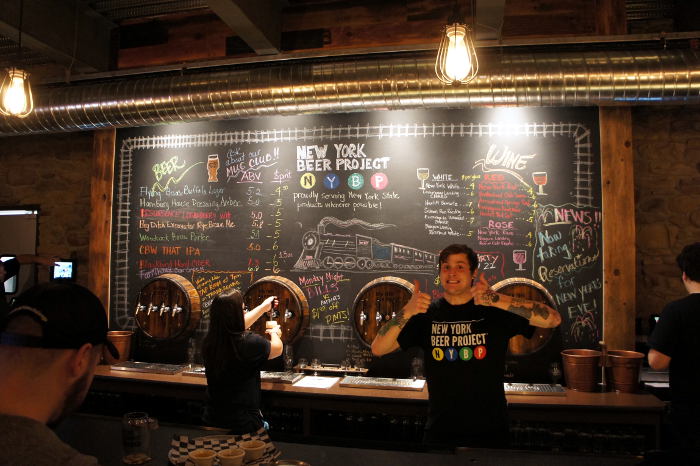 Also, NYBP’s large brewing system will allow the two resident brewmasters to indulge their inner mad scientist and let customers taste the results. Crossett said NYBP’s pilot system is much larger than those of other local brewers, allowing the brewpub to whip up multi-keg batches of more esoteric brews.

“You may come in and we’ll have a couple double IPAs on or a porter, and we going to focus on doing sour beers on this system,” Crossett said.

One of the trendier types of beer right now, sour beers are extremely tart and divisive: with beer snobs regularly proclaiming their love for them and the rest of us shaking our heads. Crossett said he and NYBP’s brewmaster Jarred Lewandowski plan to take a European approach to sour beers and create a line of housemade syrups to add a bit of sweetness and other flavor to their sour beers. The assistant brewmaster envisions customers being able to get a sour beer flight, with different syrups added to each sample.

“I think it will be a cool experience that no one’s even thought about doing here – in Western New York or in the States,” he said.

In keeping with the communal vibe, the menu features a wide range of shareable plates from sliders to Southwestern dip to tacos. NYBP also features many WNY pub staples like wings, burgers and Buffalo-style pizza. For some of its baked goods, the brewpub has also partnered with the YWCA Catering Crew – an enterprise setup to help young women become self sufficient.

NYBP also features a range of different spaces. In addition to the cavernous gastropub, tap room and multiple event spaces – NYBP is currently building out a beer garden that should be ready when the winter weather breaks.

The brewpub is still working on its initial batches of beer, so expect other local brews to be on tap for the first few weeks.

Brett Llenos Smith is a freelance writer based in Buffalo’s Allentown neighborhood who has been covering local food and culture for Step Out Buffalo over the past six years. As someone with a multi-ethnic background, he has a passion for exploring and understand the many diverse corners of Western New York.
Find More ➭ Lockport