Corfu native Chef Nick Rada has traveled the world and cooked for some of the most prominent people that inhabit it over the last 21 years, including the past four Presidents of the United States. Starting as a chef in a small restaurant in Batavia, Rada has since traveled to and honed his talents in New York, Vegas, Indonesia and Sydney, Australia. His latest venture brings him back home to WNY, as the chef of a new restaurant in East Amherst, The Oak Stave.
Rada hails from a family of butchers, canners and those who believe in homestyle cooking. Growing up in that environment inspired him to cook with similar ideals.

“I’m all about fresh, quality ingredients,” he said. “I’m not a big believer in using frozen product. In the kitchen here I have a very small freezer. I like to focus on big flavors and bring the brightness using simple flavors and techniques.”
The concept of the Oak Stave was a joint effort between owners Anthony Insinna and Russ Gugino, whose resumes point to a successful road ahead. Insinna is a lifetime entrepreneur and Gugino’s experience in the food and beverage industry is hard to beat. With Rada on their team, they’re well-poised to become a local dining destination, one that’s not a far drive for suburbanites. 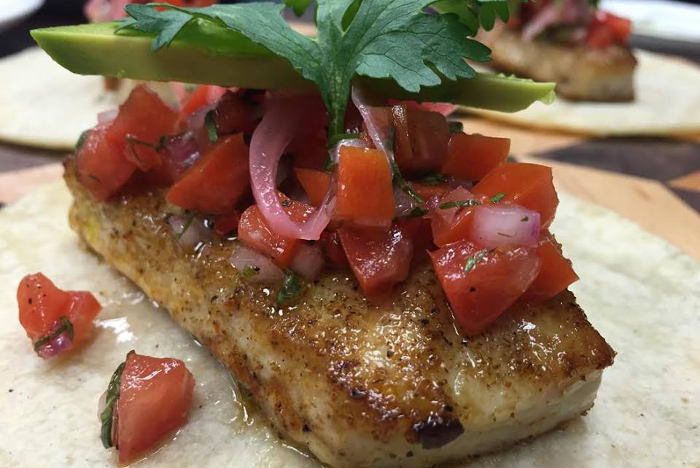 “This is a place people can go so they don’t have to go downtown to have a great meal,” Rada said. “People associate going downtown with having a really nice meal or a great cocktails or a great happy hour, when they don’t need to. They can stay right here in this area.”
When developing the menu Rada said he wanted to “bring the big city feel into a small area like this and still keep it affordable, but also expose people to things that they may not have had or seen before.”
Some “things” that fall into that category include unique and secondary cuts of steak using 1855 beef exclusive from Will Foods, signature blend burgers and “funky, rare produce”. But mystery isn’t part of the game; everything on the menu is clearly spelled out.

“You should know what you eat,” Rada said. “You should know every ingredient on the plate and should be able to recognize it. There’s nothing worse than getting a plate of food and not knowing what it is in front of you.”
That certainly won’t be the case at the Oak Stave, where the decor is just as alluring yet unpretentious as the food. Custom oak doors open to a spacious, 120-seat dining room with high ceiling and wooden beams. A hand-painted American flag mural holds a spot at the back of the dining room, and industrial-style light fixtures hang down from the ceiling. Everything has been executed as it was envisioned, which is the benefit to building from the ground up. It’s hard work that pays off in the end.
“You don’t sleep much,” Rada laughed. “I’ll sleep two, three hours a night and then the wheels are turning.”
Thankfully we don’t have to wait too long to see the result of all of that brainpower and manpower. The Oak Stave opens to the public on September 9th.
Photos courtesy of The Oak Stave