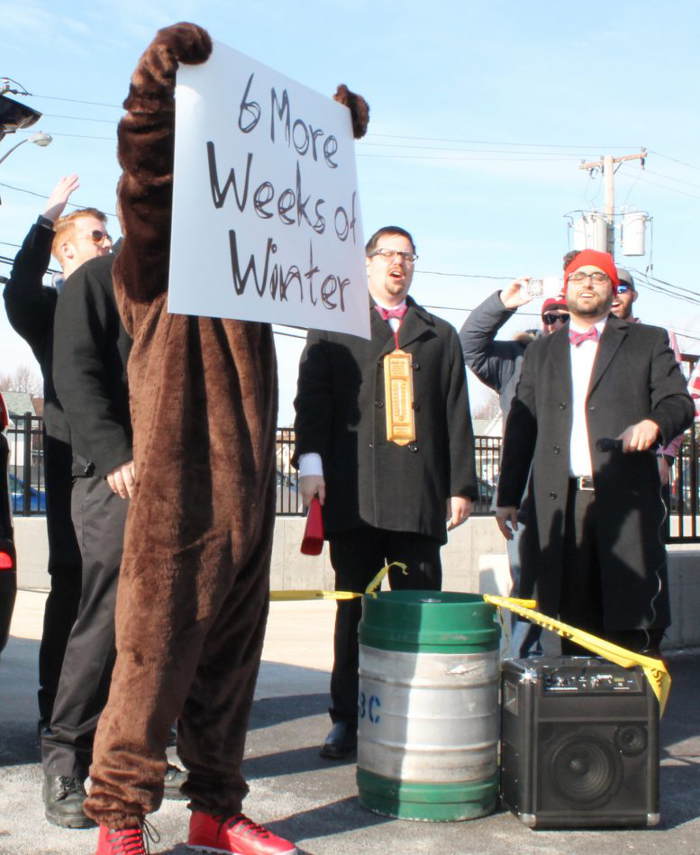 “If Punxsutawney is the ‘Weather Capital’ of the world, Buffalo is certainly the ‘Winter Capital’ of the world. Here in Buffalo, we don’t fear the winter, we embrace it.” – Adam Hernandez, Inner Circle founding member.
And there you have it folks, the reason we here in Western New York are going all out this Groundhog Day – to celebrate the fact that we absolutely without a doubt live in the Winter Capital of the world. ❄️  Also because who doesn’t love celebrating random holidays amirite?
On Saturday, January 28th join “Buffalo Mack” for the fourth annual Buffalo Groundhog Day event presented by Anthony Baldi & Associates from 12pm – 4pm at Flying Bison Brewing Co. As the story goes, Buffalo Mack was born on the second day of The Blizzard of ’77 (of course he was 😂)  and since then has predicted every major weather event in Western New York. Because of this, Buffalo Mack developed a fondness for meteorology at a young age and decided early on to dedicate his life to predicting and celebrating the Queen City’s weather. FYI, Buffalo Mack, aka Punxsutawney Phil’s cousin, elected his own Inner Circle following their 2013 pilgrimage to Gobblers Knob.  This is history y’all!

Tickets to the event are $25 presale, $30 at the door and include a commemorative Buffalo Groundhog Day mug, live entertainment by Buffalo’s own Hocus Polkas, two beer tickets, and a $5 coupon for one of three local food trucks that will be outside the brewery.
Members of Buffalo’s Inner Circle -wearing their official regalia- will awaken Buffalo Mack from his hibernation to look for his shadow as the first groundhog to predict the weather for the next six weeks. Naturally. You can’t have Groundhog Day party without a hardcore winter weather prediction!
We’re willing to bet we get saddled with AT LEAST 6 more weeks of winter, but hey who’s counting. Face it, we know (and do) winter better than anyone, we’re the Winter Capital of the World for cryin’ out loud. #wereusedtoit  ⛄️
As if a solid brewery party in the dead of winter isn’t convincing enough, proceeds from the event will benefit the Buffalo Zoo and other local animal organizations.
It’s time to cement this city’s position on the meteorological map! For more info about the event and to purchase tickets head to buffalogroundhogday.com.

Saturday, January 28, 2017
12pm – 4 pm
Flying Bison Brewing Company, 840 Seneca St., Buffalo
Tickets :$25 pre-sale, $30 at the door
buffalogroundhogday.com
*Buffalo Groundhog Day is a Step Out Buffalo sponsored event! Because we love winter and you should too.*