A day spent in the heart of Buffalo’s Theatre District is a day well spent from the skyline to the street art and the theatrical passersby. If you’re Shea’s obsessed like many Western New Yorkers, you already know how incredible space is, but, how much do you know about Shea’s 710 Theatre?

Sheas’ latest super cool space is totally up close and personal, and we totally approve. Theatre-goers get a one-of-a-kind experience because of the dynamic thrust stage. Shea’s 710 Theatre seats 625, and no joke literally every seat is desirable since the stage projects into the auditorium.

Mark your calendars because a modern rock musical is coming to town. Spring Awakening hits the stage March 8 through March 18. For only $44, you can secure your seat at this must-see show. Waiting to get tickets is strongly discouraged aka get yours now or expect regrets later. We’ve all been there.

710 Theatre creates this magical intimate experience and we are all about it. Imagining yourself as part of the show is super easy. If “time traveling” back to late-19th-century Germany is on your bucket list, you want these tickets. 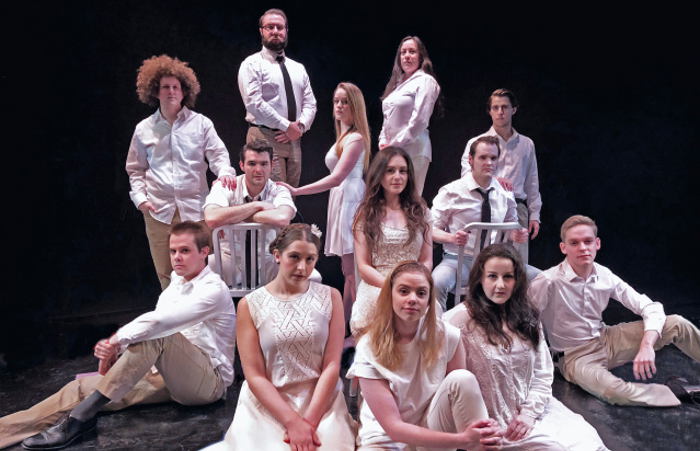 Spring Awakening is a modern rock musical that follows a group of teenagers in late-19th-century Germany. A controversial and rebellious show, Spring Awakening serves as an expression of hope and determination for a new, progressive, and liberated generation in spite of conservative and authoritative adults.

Based on Frank Wedekind’s groundbreaking and controversial play, Spring Awakening takes place in 1891 Germany, a time when grown-ups held all the cards. Headstrong Melchior and naive Wendla stumble into each other’s arms, passionate and curious, while anxious Moritz struggles to live up to the stringent expectations of society. With only each other for guidance, this group of young men and women travel the fraught and rocky path of adolescence, discovering their bodies, their minds, and themselves along the way.

The winner of eight Tony Awards including Best Musical, through what Entertainment Weekly called, “the most gorgeous Broadway score this decade,” Spring Awakening is an electrifying fusion of morality, sexuality, and rock and roll that exhilarates audiences across the nation like no other musical in years.

Get Your Tickets ASAP

Spring Awakening has been seriously wowing audiences for years now, and personally, we’re excited to see this production making its way to downtown Buffalo.

Attention: any and all theatre geeks and theatre newbs, regardless of where you are on your personal theatrical journey! This is show is most definitely a must-see. Tickets are available on March 8, 9, 10, 11, 15, 15, 17, and 18. Our advice: get ‘em while you can. Major success for this show is quite likely.