On Our Radar: Perry’s Limited Edition Zero Visibility Flavor Ice Cream is Back 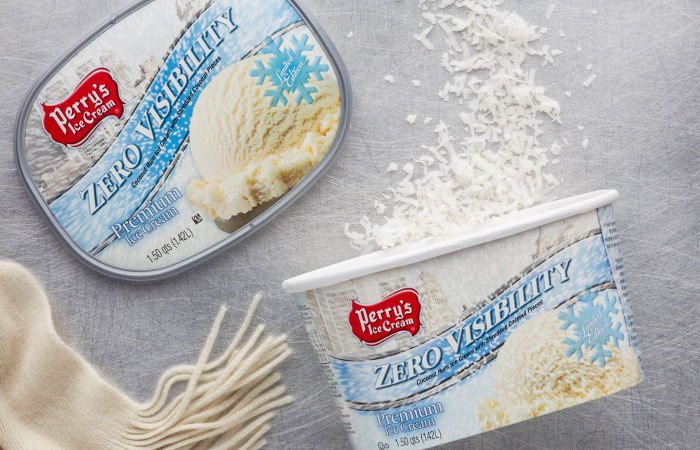 Commemorating 40 years of snowstorms, and the only shovel required for this whiteout is a really big spoon
THIS IS NOT A DRILL! Inspired by the icy wind and blustery cold that left Buffalo and its surrounding areas at a standstill from January 28 – February 1, 1977, Perry’s Ice Cream has re-released their limited edition flavor, Zero Visibility to commemorate the blizzard’s 40th anniversary. WE REPEAT: Perry’s super limited edition ice cream that commemorates one of the most infamous weather-related events in Buffalo’s history is back! (!!!!)
Perry’s first launched Zero Visibility in 1997 to mark the 20th anniversary of the Blizzard of ‘77. Zero Visibility is a snowy white coconut ice cream with a flurry of shredded coconut pieces and a hint of rum. Woof. And because Perry’s loves us, the Zero Visibility flavor is available in family size (aka 1.5 quart) packages so we can eat to our heart’s content~ Yes, it’s perfectly acceptable to eat an entire family size to yourself. It’s sweatpants season ffs.

The inspiration for this flavor came from WNY’s resilience to everything from the Blizzard of ’77 to Snowvember ‘14 to that storm we had a few weeks ago. If you’ve ever been stuck on the 90 or behind the wheel with nothing in sight, this flavor – and that hint of rum! – will warm your bones on a winter’s night.
Zero Visibility is released every five years and won’t be seen in freezers again until the blizzard’s 45th anniversary. So while snow knows no season in our region, this limited edition flavor does. Scoop up a bowl before it’s going, going, gone!
Now here’s the most important part: when you find out where you buy it. Perry’s Zero Visibility is available for purchase at Wegmans, Tops, Dash’s, 7-11, and other retailers. ALSO the Zero Visibility and One Buffalo flavors will be sampled at Buffalo-area Wegmans locations on January 28 from 11 a.m. to 3 p.m. to celebrate both the blizzard’s anniversary and Wegmans 40 years in Buffalo. Mark it on your calendars and run, don’t walk.
Because we <3 you, here’s a full list of the sampling locations:

This amazing and oh-so-Buffalo flavor won’t be around for long! To find a location near you, use the Perry’s Flavor Finder via perrysicecream.com.

Perry’s Ice Cream, founded in 1918 by H. Morton Perry, and headquartered in Western New York, is a family-owned and operated fourth generation ice cream manufacturer with over 300 employees. Perry’s Ice Cream uses fresh milk and cream from local farms to proudly craft and slow-cook its ice cream products for an exceptionally creamy texture and taste that consumers have fallen in love with for close to 100 years. For additional information about Perry’s Ice Cream, visit: www.PerrysIceCream.com or @perrysicecream via: Facebook, Twitter, and Instagram.