These Pieces in We Wanted a Revolution: Black Radical Women 1965-1985 Are a Must-See 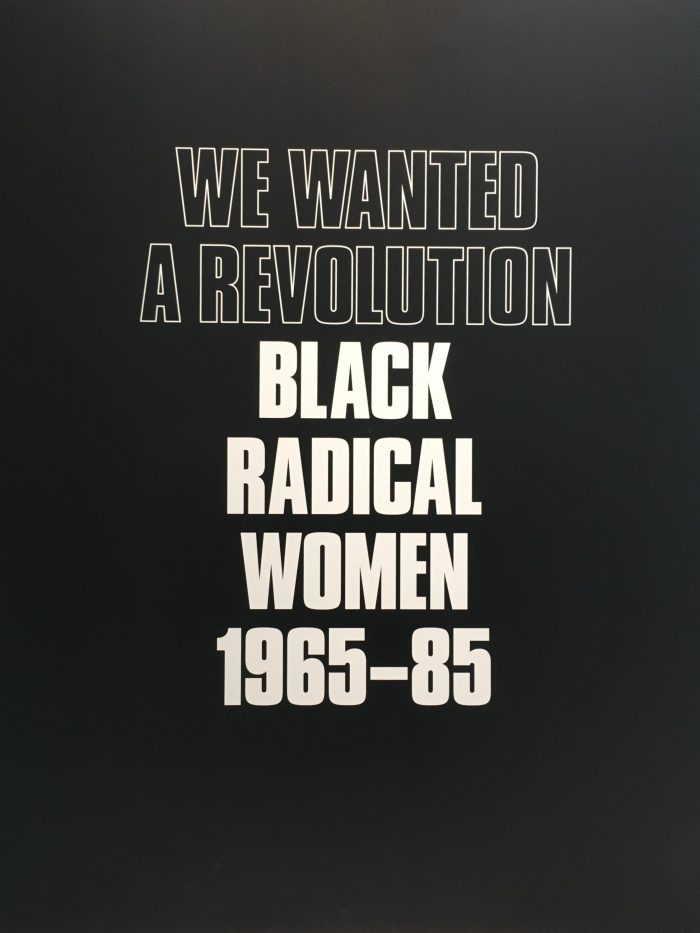 We were so excited when we heard that this exhibit was coming to the Albright-Knox Art Gallery, and we cannot recommend enough that you go check it out before it closes on May 27. Part art show, part political statement, part history lesson, We Wanted a Revolution will amaze, shock, and – we guarantee – educate you. Black women, who, as this exhibit highlights, have been at the forefront of art, feminism, and activism for decades, are largely underrepresented in both the arts and the mainstream feminist movement. This exhibit works to expose that underrepresentation and to combat the cultural trend of silencing and marginalizing black women’s voices and achievements. Here’s a peek at some of the must-see pieces in this stellar exhibit. 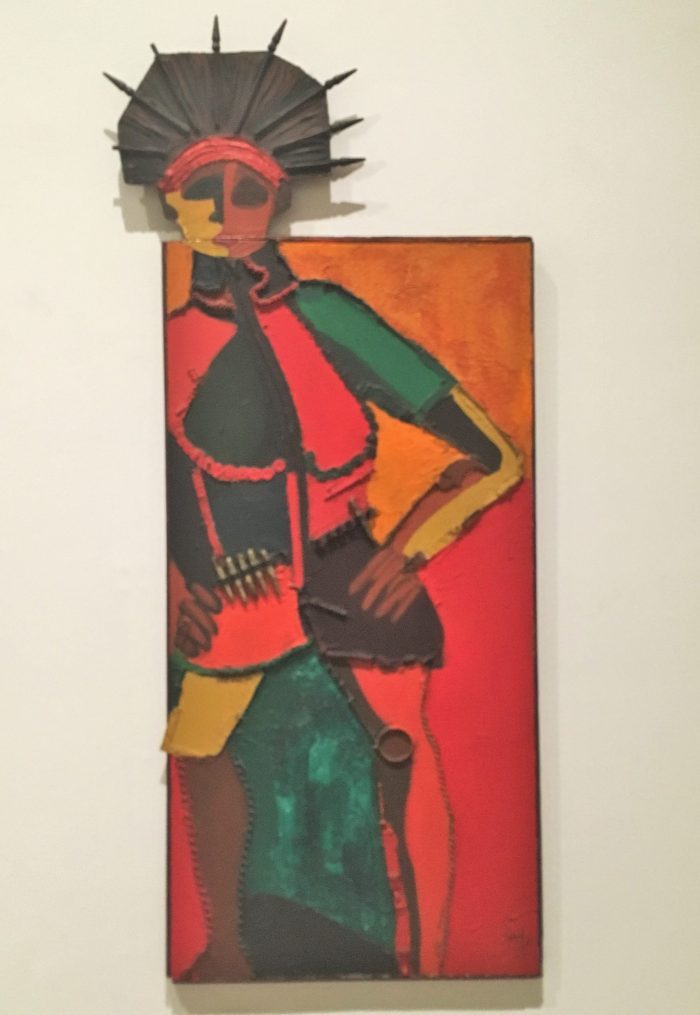 This piece, in our opinion, perfectly sums up the overall feel of We Wanted a Revolution. Created by self-taught artist, author, and illustrator Dindga McCannon, this work represents the “revolutionary sister,” or the combative woman warrior. In her artist’s statement for the piece, McCannon explains that she created this image of a black woman warrior at a time when she felt none existed in mainstream culture. McCannon wanted to create a role model for herself and other black women who were battling everyday against racism and sexism. And even though this is a warrior, notice that she’s not carrying a gun. This is because, as McCannon explains, “the power of change exists within her.” 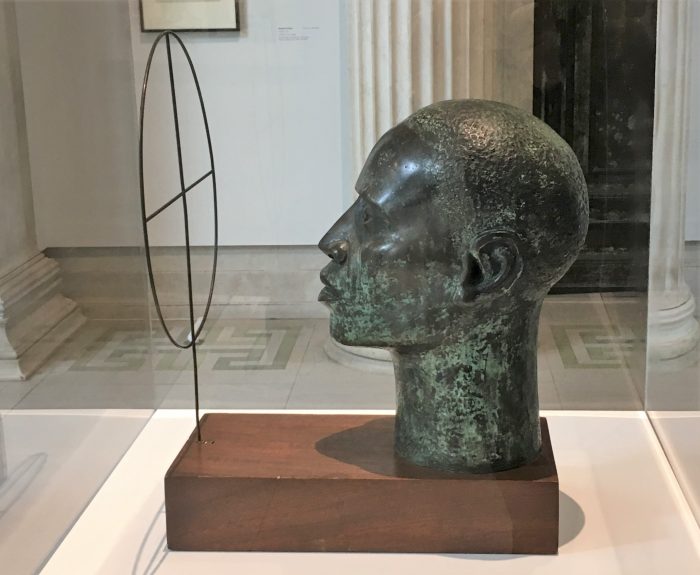 Another piece without a gun in it – and yet, the presence of a pointing gun is ominous. This piece, entitled Target, is a bone-chilling representation of the crosshairs of a rifle scope aiming directly at a black male’s face. Elizabeth Catlett, an artist and sculptor, often made work that directly addressed the sociopolitical issues of her day. She created Target in direct response to the deaths of Fred Hampton and Mark Clark, two Black Panther activists who were murdered by police brutality in 1969. Nearly 50 years later, this piece is still frighteningly relevant. 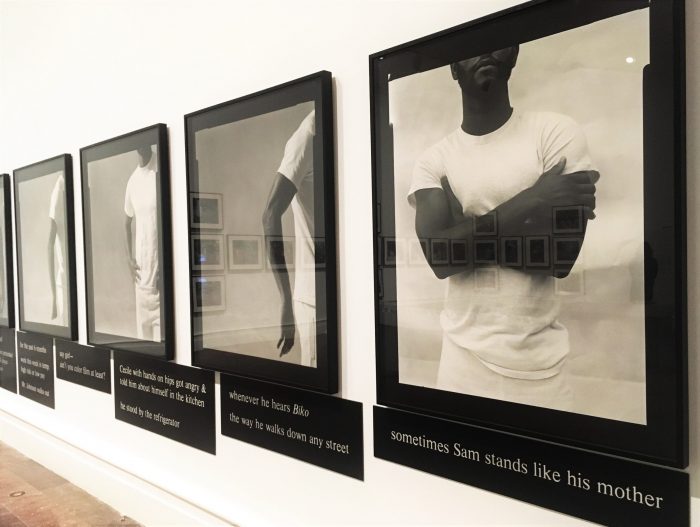 This piece by photographer Lorna Simpson is a beautiful, thought-provoking engagement with expectations surrounding black masculinity. Gestures/Re-enactments features a series of photos of a young black male in different poses. The photos are paired with phrases that draw attention to the man’s posture as well as to the surrounding moment that might lead him to pose in that way. These pieces ask us to think about the social, cultural, and political forces constantly acting on male bodies of color.

While Simpson’s Gestures/Re-enactments offers an investigation into black masculinity, dancer and choreographer Blondell Cumming’s Chicken Soup deals with black femininity and gendered domestic work. This dance piece, presented here as a video recording of Blondell’s performance at the Dance Theater Workshop in 1983, imagines the motions of a female domestic worker in the kitchen – stirring, kneading, slapping her hands on her thighs as she’s laughing. The openness and familiarity of these actions might offer a warm comfort to the viewer. However, this comfort is offset by the jerky, repetitive movements of the choreography. Be careful not to miss this video installation, which plays on a continuous 16-minute loop in the first-floor Gallery for New Media (separate from the rest of the exhibition on the second-floor). 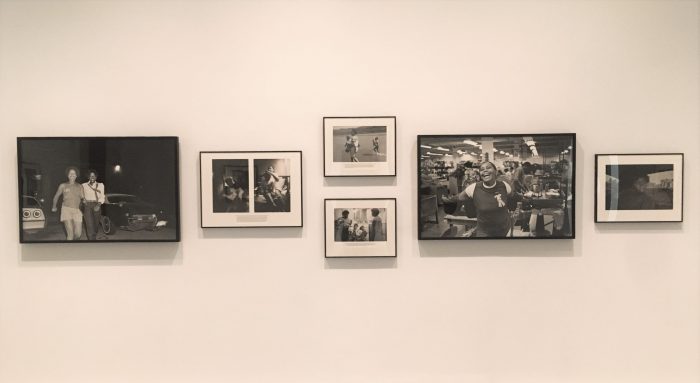 Too often in our society, we are inundated with stories of black trauma – shootings, discrimination, police brutality. Multimedia artist Carrie Mae Weems’s Family Pictures and Stories dares to tell a different story – that of black joy. The figures in these photos are going about their normal lives, but these images capture them in moments of seeming joy & content. Weems also intended for this work to refute the findings of the Moynihan Report of 1965, which suggested that a weak family structure was to blame for the “deterioration of the fabric” of black American culture. These photos of her own family suggest a supportive, tight-knit, loving network of relatives.

Artist Howardena Pindell has incredible pieces scattered throughout this show, but this one is definitely one of our favorites. Free, White, and 21 is a video installation that highlights the very different experiences of young white people versus young people of color. The video is staged as an interview between the artist and the artist in whiteface posing as the interviewer. As herself, Pindell shares personal stories of racial discrimination she has faced throughout her life – beginning as a young child being tied down to her summer camp bed for asking to use the bathroom, up through her difficulties finding a job as a black woman despite having a degree from Yale. As the interviewer, Pindell waves away the stories of discrimination and spouts a white supremacist narrative, telling her counterpart, “In fact, you won’t exist until we tell you that you do.” 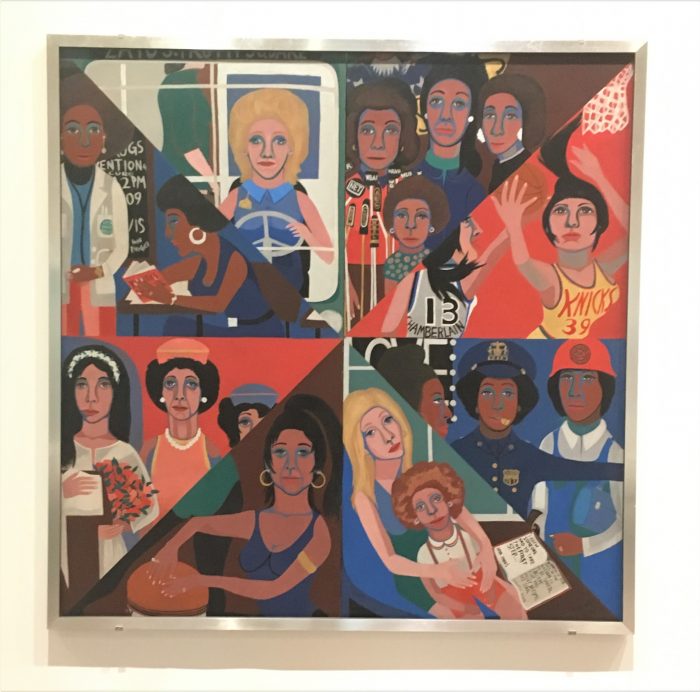 For the Women’s House

This piece, created for the inmates of the Correctional Institution for Women in Rikers Island, NY, represents a dream for a future world we might someday inhabit. Artist and writer Faith Ringgold created this mural to be a symbol of hope for the inmates, as well as of the long journey ahead of them – and all of us. Featuring a diverse cast of women as professional basketball players, doctors, and even president, this piece is a joyful and positive vision for a hopefully not-too-distant future.