If you’ve ever spent time digging through the bins at Home of the Hits or stumbling around The Continental at 1 a.m., then walking into newly-opened Allen Burger Venture will feel like a weird sort of homecoming.

The new gastropub is a collaboration among chef Dino DeBell, craft beer enthusiast Mike Shatzel and professional rock musician Johny Chow and the triangulation of those three things – food, beer and music – is what’s sure to bring people through the doors of ABV. However, those of us who have been living near or visiting Allen Street for years will probably keep coming back for ABV’s distillation of Buffalo’s alternative music and cultural scenes.

“I’m not saying it’s not going to be for everybody, but some people won’t understand it,” Shatzel recently told me. “Like, I don’t want my dad to be necessarily comfortable here. He’s 83, you know, and he could come in – but he won’t understand the music.”

That description might make ABV sound like some dingy, weird smelling cousin to the Old Pink, but the place is very clean and new. Shatzel also told me that he expects parents to bring their kids in for a great burger and maybe check out a different kind of music, art or culture. It’s a vibe that only makes sense on Allen Street, not in some strip mall on Transit Road.

Already a part owner in Blue Monk and Coles, Shatzel has gotten some criticism online for having the same restaurant, only in different locations – but stepping into ABV – you quickly understand that this gastropub is nothing like either Blue Monk or Coles.

“I always wanted to open a place on Allen,” Shatzel said, adding that Liz Kolken, who had owned the building, approached him and he couldn’t pass up the opportunity.

The full menu, which won’t be rolled out for another week or so, is slated to feature a number of mouth-watering farm-to-pub burgers, with toppings that range from fire-roasted poblano peppers to seared foie gras.

ABV, an allusion to alcohol by volume, also features a unique draft tower that doubles as found art sculpture. With 24 craft beers – including one made especially for them by Community Beer Works called ABV IPA – and wine on tap, the bar will also have a range of craft brews in cans only. 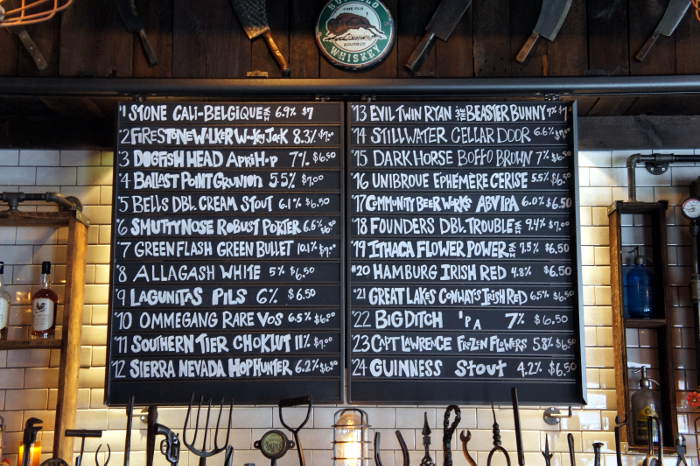 One of the major drawbacks of opening a business on Allen Street is the lack of parking, but Shatzel said he actually saw this as an opportunity to embrace Buffalo’s bike culture. The pub will feature a tire fixing station, bike racks and there are even plans for a bike valet around back.

“We’re working out the logistics on it,” Shatzel said. “We’re going to hire someone to kind of be a security guard back there. You can park your bike, it’ll cost you like $6 or something, you’ll get a token and you can come in here and get a beer.”

“So if you want the beer you basically park for nothing,” he added.

RELATED: ABV is a Trifecta of Greatness

The ABV crew had wanted to open up months ago, but the building needed roof work and that required three days in a row of temperatures above 25 degrees F.

“We literally lost 45 days,” Shatzel said. “It was impossible.”

After officially opening the doors for a few hours this past Saturday and Sunday, ABV will be open with a full bar starting Tuesday (3/17) – Thursday at 5pm. They will open Friday (3/20) at 2pm for the UB Bulls Game and Saturday and Sunday at noon. Their full food menu will be available beginning Tuesday, March 24th. ABV will be open for lunch and dinner 7 days a week.

Brett Llenos Smith is a freelance writer based in Buffalo’s Allentown neighborhood who has been covering local food and culture for Step Out Buffalo over the past six years. As someone with a multi-ethnic background, he has a passion for exploring and understand the many diverse corners of Western New York.
Find More ➭ Allentown, Downtown, Lunch