These Pizzerias Got Buffalo Named “The Ultimate Pizza Destination” 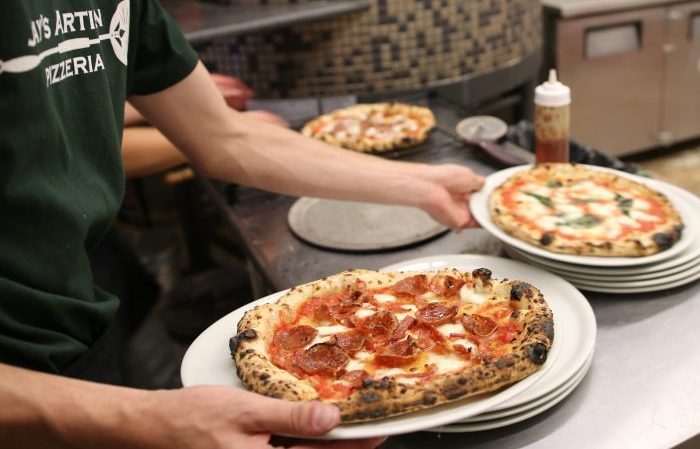 “There, I said it. I’m in love. Buffalo serves some awesome pizza.”

Arthur Bovino, author of the book ‘Buffalo Everything’ and originally from NYC,  makes the case that our very own Buffalo, NY is the ultimate pizza destination in the world. Why? According to Bovino, it’s the flavors and genius combinations behind Buffalo’s pizza that makes us the ultimate ‘za capital.

If you’re from Buffalo, you know that pizza (and wings) are considered to be their own food group. Just how much do we love our pizza? Well, did you know that there are more than 600 pizzerias in Buffalo and its immediate surrounding urban area, and that around 573 of those are independently owned? With 256,902-ish people living in Buffalo, there’s at least one pizzeria for every 428 people in the Nickel City. “Compare that to New York City, whose some estimated 1,600 pizzerias serve 8.538 million people.”

Ok we get it we’re addicted to pizza. But what makes Buffalo pizza so much better than New York, Chicago, Detroit, or anywhere else? Bovino explains, “The dough has the lightness of a focaccia, there’s always lots of cheese, and while the sauce does happen to be slightly sweet, that ends up being a nice contrast to the spicy oil pooled in the copious charred, meaty pepperoni.”

In laymans terms? “Buffalo-style pizza is typically a cup-and-char pepperoni pizza, one with a slim, sometimes non-existent crust coastline with ingredients out to, and sometimes even over the edges, a thick, airy undercarriage with little to no structural integrity that’s topped by a sweet sauce and enough cheese to nearly always guarantee a cheese pull. If you were going to use other regional styles to describe it, I’d say it’s a Detroit amount of cheese with a Motor City trim, a Maine undercarriage (think Portland’s Micucci’s or Slab), and a New York City soul.”

Here are the Buffalo pizzerias that were mentioned by name:

In order of appearance

Brittany is Canisius College student interning at Step Out Buffalo for the summer.
Find More ➭ Pizza, Step Out College