On Our Radar: Cash Mob @ West Side Bazaar 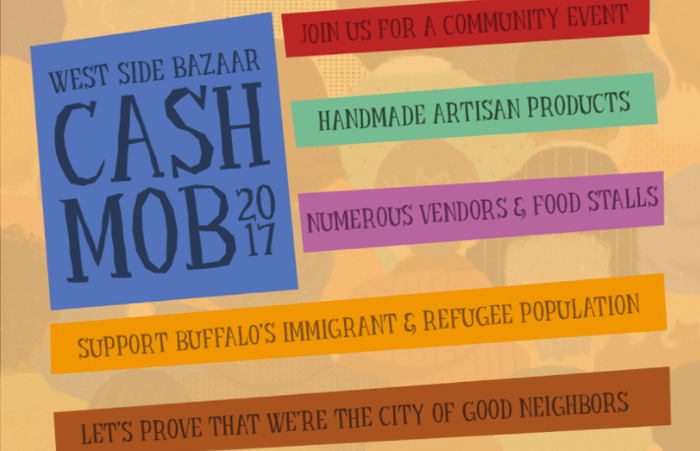 On February 16 from 4-7 p.m., local shoppers will descend en masse on the West Side Bazaar on Grant Street to show support for the immigrant and refugee community that runs the facility. In light of recent events, West Side residents Lizz Schumer and Nick Guy decided to launch the cash mob to show support for the refugees and immigrants who make up the diverse fabric of that community.
“Refugees and immigrants are such an important part of what makes Buffalo such a great place to live and work. The West Side Bazaar is an amazing community resource that helps our neighbors showcase their home countries’ craftsmanship and cuisine,” Schumer explained. “This is the City of Good Neighbors, and we want to show our newest neighbors that we love them, we want them here, and we believe in their vital contributions to the vibrance of our city. Let’s put our money where our mouths are!”


A cash mob is a pop-up shopping event in which large groups of people are invited to visit local stores and restaurants, purchasing goods, services or food to show support for a community or endeavor. The West Side Bazaar Cash Mob will invite locals to shop between the hours of 4 and 7 p.m. on February 16, at both the diverse food stalls and merchant shops within the bazaar, located at 25 Grant St. in Buffalo.
The West Side Bazaar is operated by the Westminster Economic Development Initiative, a community organization that works to improve the quality of life for residents of the West Side since 2006. WEDI works to reduce barriers to success and opportunity for all economically disadvantaged residents through a variety of programs, including the West Side Bazaar.
According to WEDI’s website, “The West Side Bazaar is an international small business incubator located in an ethnically diverse neighborhood commercial district in Buffalo, New York. We are dedicated to offering our vendors a safe, nurturing, and affordable environment to grow their ‘grassroots’ businesses. We are committed to offering our ‘partners’ business coaching, financial mentoring, low interest loans, networking/marketing opportunities, and steady customer traffic.” For more information about WEDI and its initiatives, visit wedibuffalo.org.
More info can be found on the Facebook event for the Cash Mob. All photos, with the exception of the cash mob logo, are courtesy of WEDI.