On Our Radar: Oliver’s Tasting Menu 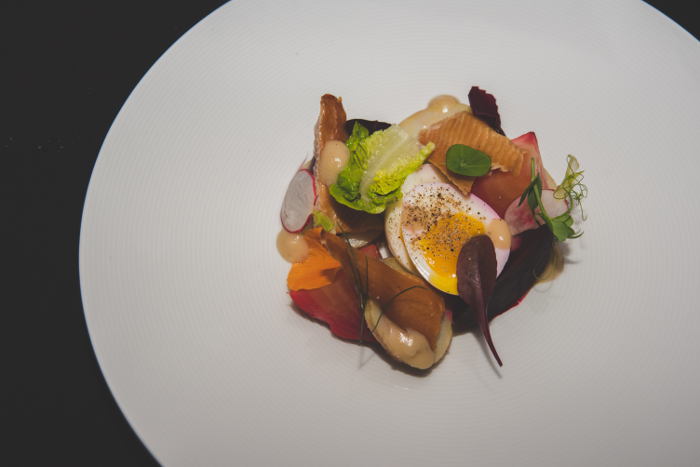 Oliver’s Restaurant has somehow unlocked a magic formula that keeps guests coming back year after year, and generation after generation.
According to Brandon Ford, the resident sommelier at Oliver’s, one of the secrets to the restaurant’s success has been identifying and hiring the best young chefs in the area over the years.
“It was Mike A, it was Paul Jenkins, it was Brian Mietus,” he recently recited to Step Out Buffalo. “If you don’t think that they were the best young talent – look at what they’re doing now.”
Today, Chef Ross Warhol is overseeing the kitchen at Oliver’s and the well-pedigreed young chef has been regularly showcasing his skills and experience through his tasting menu, which changes monthly and features some of Warhol’s more inspired creations. Recent tasting menus have featured dishes with eye-popping pastels, symphonies of textures and cleverly-arranged familiar ingredients that tantalized both the brain and the taste buds.

Citing growing popularity, the restaurant recently expanded the tasting menu’s availability, from offering it solely on Tuesday evenings to making it available Tuesday, Wednesday and Thursday nights.
Ford said Chef Warhol’s tasting menu offers local diners the chance to have the caliber of dining experience one might have a hard time finding outside of New York, Chicago, or Los Angeles.
Diners opting for the tasting menu can decide between five ($55) or seven ($75) courses. There are also three different tiers of wine pairings diners can choose from: classic, adventurous, and iconic.
“Every course surprises you, the pairings surprise you,” Ford said. “We’re offering a New York City dining experience here in Buffalo, at a great value too. I think a tasting menu of similar quality in New York might be $125 or $150.”
While the food alone is more than enough reason to check out the tasting menu at Oliver’s, diners should also take advantage of Ford’s expert wine pairings. We might feel like we’re a bit behind the times here in Western New York, but Ford, a certified sommelier, said he likes to keep his guests ahead of the latest wine trends.
“Five years ago, grower champagne started to really become a thing, and there was already a dozen on my list,” he said. “So when everyone was trying to get the same thing, we already have it.”
The wine pairings at Oliver’s often feature regional wines, which have come a long way in from the cloying, super-sweet New York State wines of yesteryear. Ford said some fantastic pinot noirs, cabernet francs and syrahs are coming out of the Finger Lakes in particular.

“It started with Hermann J. Wiemer,” he extolled. “They’re sort of the godfather of world class wine in the Finger Lakes. And then it’s come up through young winemakers such as Nathan Kendall, Kris Matthewson with Bellweather’s, Christopher Bates with Element Winery, the Heart & Hands guys and Kelby Russell, who’s just crushing it at Red Newt.
“They’re all making wines that aren’t just good for New York State, they’re just good period. We don’t serve them as a favor to anybody. We serve them because they’re great wines at that price point.”
While Oliver’s is known for a more refined dining experience, its longevity is in no small part due to unearthing exceptional value. Whether it’s found in a regional wine, an enthusiastic sommelier or a talented young chef – that value is passed on to appreciative, knowing diners who keep coming back again and again.
For more info on Oliver’s Restaurant visit oliverscuisine.com and follow them on Facebook.