On Our Radar: Resurgence Brewing Launches a Cocktail Menu 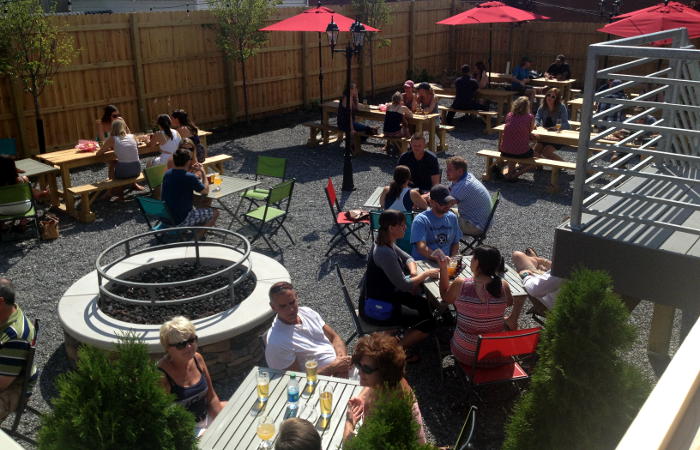 After being open for just about two years now, Resurgence has decided to expand their drink menu to include a small list of cocktails featuring locally distilled spirits starting Tuesday, May 17th. The list includes Spiked Blood Orange with 1812 Vodka, Fitzgerald with Tommyrotter Gin, Dark & Stormy with Black Squirrel Rum, Ginger Kombucha from Bootleg Bucha, and Green Tea Gimlet with Lockhouse Gin. For more details read the press release below.
—
Resurgence Brewing Company has been a West Side destination for unique, trueto-style craft beer for almost two years now and on Tuesday, May 17, the brewery is launching a local-focused cocktail menu to highlight Western New York distilleries. Starting May 17, RBC will be open Tuesday-Sunday, to give visitors even more chances to experience a great beer or sip a new cocktail in the spacious, family-friendly taproom and sunny biergarten all summer long.
“We wanted to give people who don’t necessarily like beer or wine another option,” said owner Jeff Ware of the new cocktail offerings. “We won’t be doing shots or changing our identity as a family-friendly, laid-back spot to have a couple of drinks and enjoy yourself. The new cocktails are just going to add another dimension to the experience of Resurgence.”
The new cocktail menu will feature 1812 Vodka from Niagara Distilling, Lockhouse gin, Tommyrotter gin and Black Squirrel rum in a small, curated cocktail list focused on making the most of Western New York’s small-batch spirits. Since opening, RBC has worked with local wineries, cideries and food purveyors to round out its menu, with offerings from Blackbird Cider, McKenzie’s Hard Cider, Breadhive, That Popcorn Shack, Gramma Mora’s, Buffalo Burrito Company, Pepper Palooza, Arrowhead Winery, Black Widow Winery, Freedom Run Winery, Bootleg Kombucha and others.
“Here at RBC, we have a rising tide mentality,” said Ware, explaining why he decided to use local spirits and ingredients. “Buffalo is the city of good neighbors, and if we help each other out, we all benefit.”
Resurgence Brewing Company has up to 15 original beers on its menu at all times, plus cider, sangria, wine, mead, kombucha and now cocktails at its West Side taproom, located at 1250 Niagara St. For more information about the menu, the space or cocktail specifics, visit resurgencebrewing.com, facebook.com/Resurgencebrewing, @Resurgencebrew on Twitter, @Resurgencebrewingco on Instagram and @Resurgencebrew on Snapchat.