The Buffalo Museum Of Science, nestled neatly off of the 33 at the edge of Dr. Martin Luther King Park, is located in Buffalo’s East Side. The park was originally part of the Olmstead designed Delaware Park. The elegant building from a more aristocratic day has been the center of curiosity in WNY since 1929.

However, when people go to science or natural history museums there are a few things they expect. Whether you’re a family visiting with children or not, you go into a science museum wanting to see earth’s former dominating entities. You anticipate coming face to face with some dinosaurs! For a little while Buffalo’s museum was ‘in-between’ prehistoric exhibits. There has been an albertosaurus skeleton in the lobby as you walk in and then a boney mastodon frame in the great hall of main exhibits, Stanley and Seymour if you know the museum well enough, but where was the room dedicated exclusively to fossils of our now extinct earthly predecessors?

After their brief hiatus the dinosaurs are back! This time in a carefully planned out room entitled Rethink Extinct. Artifacts that have been put away for some time have been dusted off, polished and put on display in their most dignified presentation ever. Regular museum attendees will surely notice that the full triceratops and T-Rex head are back. The dodo bird specimen is finally part of a prominent exhibit, trilobites and megalodon sharks dug up right here in Western New York once again have a home in the public eye. 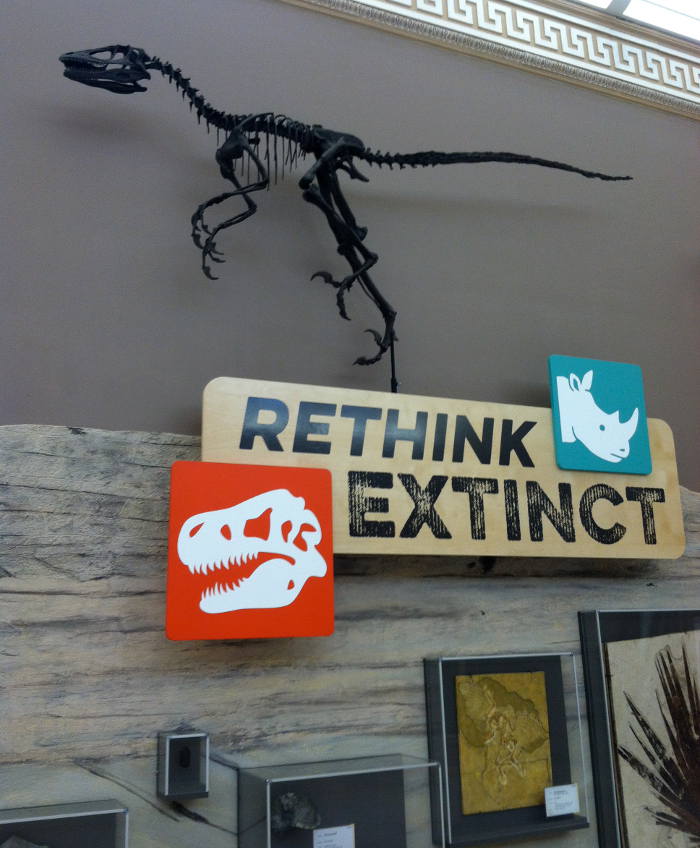 Rethink Extinct does an excellent job of informing museum goers on the process of extinction, both natural and man made. Interactive displays are laid out explaining each fossil and artifact with their era of origin, cause of extinction and where it was found. There’s a mock dig sight and other paleo-science tools and processes where you can uncover fossils of your own, actual bones from cretaceous era dinos you are free to touch, and a wide collection of human consumer products used from the bodies of animals that today are considered threatened to near extinction. This room answers the questions about how natural extinctions took place before man, how man is contributing to extinctions in the modern era, and most importantly what we can do to reverse these unnatural processes.  Rethink Extinct is here to stay at the Buffalo Museum Of Science and should prove to be a favorite as it’s as entertaining as it is informative to any age. 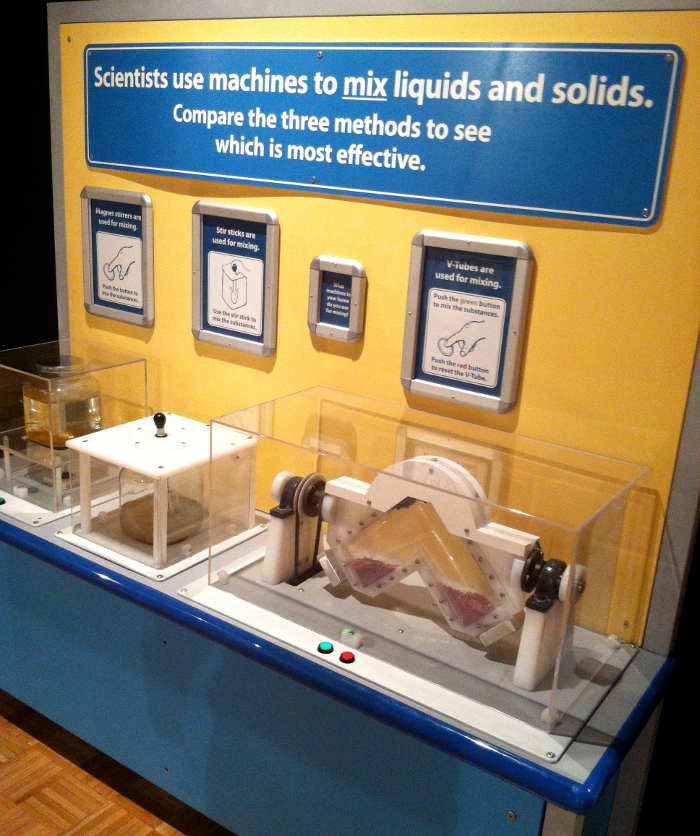 If there is another thing people crave from museums these days, whether they be tourists or locals, it’s the presence of hands on learning activities – something really interactive they can mold and govern themselves. For a limited time Buffalo has a plethora of exhibit stations dedicated to just that. The main room for attractions at the museum is always rotating. Until May 10th Buffalo is graced with a visit from the infamous Curious George! On loan from Minneapolis’s Science Museum, this very kid friendly exhibit ‘Curious George Let’s Get Curious!’ introduces kids to scientific concepts like math, physics, and engineering.

The room is laid out to look like the set of the PBS Kids cartoon. There’s an apartment building with window washers you can control to demonstrate the function of pulley systems. A construction site with cranes and conveyor belts used to move and assemble structures with foam blocks. A build-your-own mini golf course complete with obstacles you must change and manipulate to stay on par. A farm with powerful wind simulators to display the function of windmills and other wind stimulated farm tools. Kids can learn about business with the sidewalk produce stand or use the many microscopes to examine everyday objects in a way they have never seen before. This temporary section is geared for young kids in an obvious way, but that doesn’t mean anyone older can’t participate and enjoy it as well. There is still much to learn by adults and teens from these Curious George displays and of course plenty of nostalgia to be had for anyone who has ever read the now 75-year-old book series.

The museum does a great job presenting exciting things for new comers, some have been in place for over half a century and some a bit more modern: the space room on the top floor for instance, the weather, insect, and mechanical floor,  the human body, ancient artifact, or vertebrate evolution rooms. Do yourself a favor and stop in to see these two new wonderful additions to the Buffalo Museum Of Science, and enjoy some of the old as well.