Road Trip Series: Guide to a Weekend in Toronto 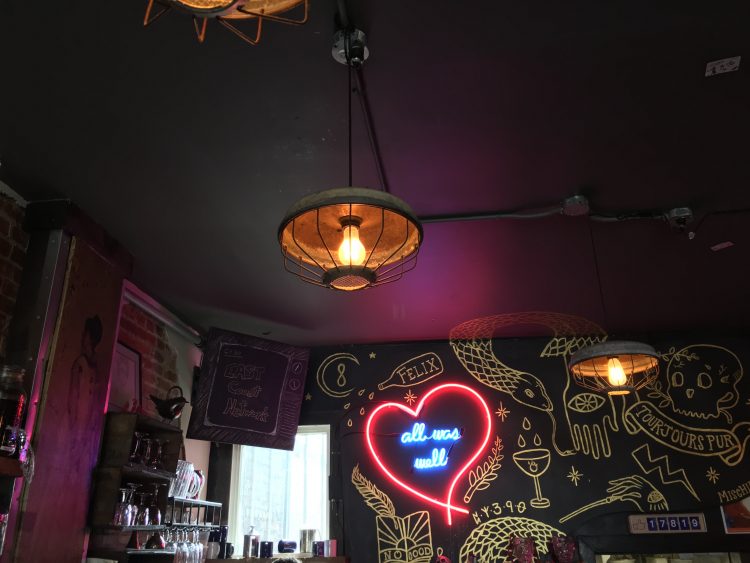 Updated June 2019
Where can you find a chic Harry Potter-themed bar, a world-renowned multi-cultural market full of mouth-watering food and vibrant nightlife, all in one city, a few hours from Buffalo?
Just a hop, skip and jump across the border in the Toronto.
A Google search for things to do in Toronto will show you the basics. Take an elevator ride up to the top of the CN Tower, the third tallest tower in the world, and if you’re feeling adventurous, you could even do the “edge walk,” and walk around a small rim of the tower while harnessed to a small cord. You could also visit the Toronto Zoo, home to 5,000 different animals (including pandas). These are great, but if you’re looking to venture out beyond downtown, here’s a list of some of unique and creative Toronto spots to explore Toronto like a local – or at least a tourist who only lives 90 minutes away and visits often. 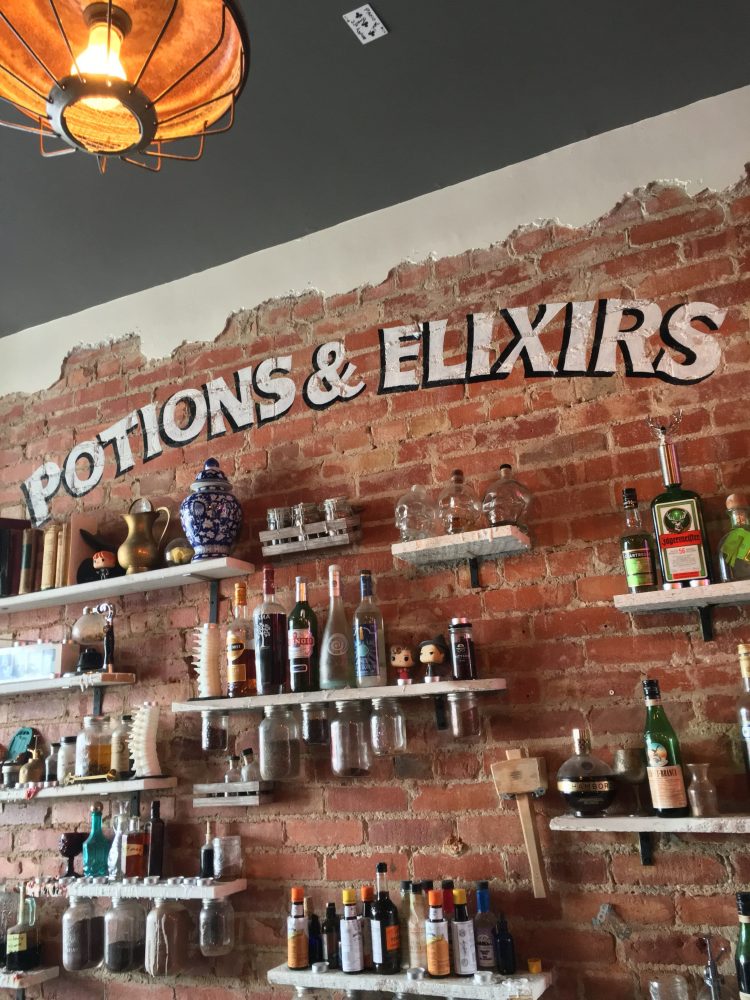 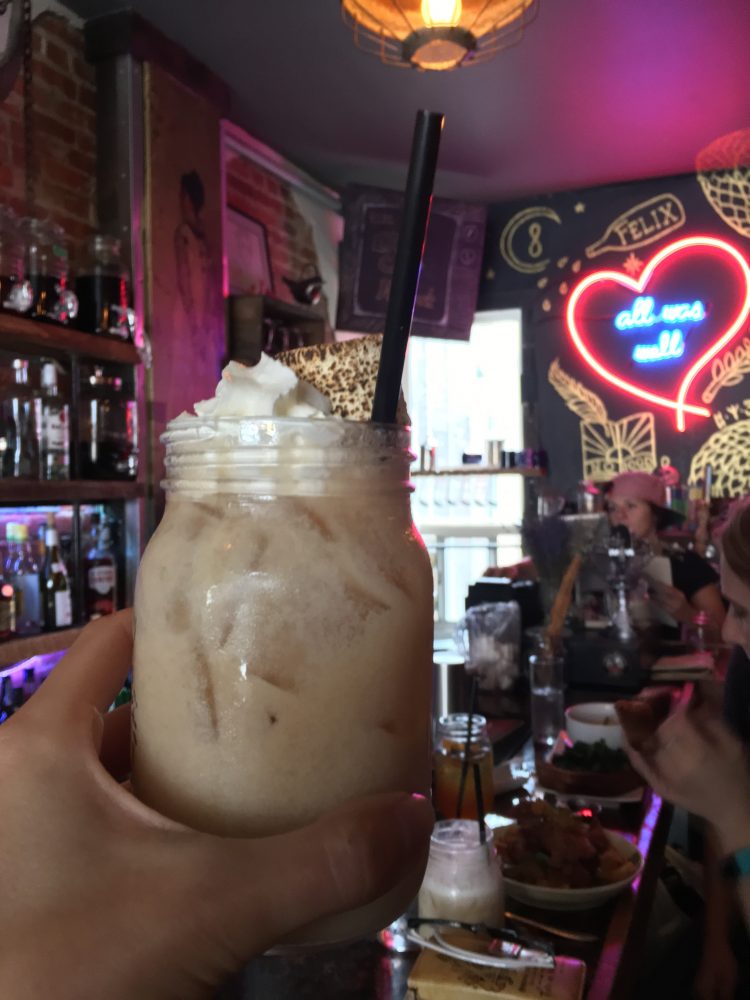 1479 Dundas St. W // Website // Menu
For Harry Potter fans who may not have received a Hogwarts letter but still refuse to believe they’re muggles, this spot will be like returning home to you. Non-Harry Potter fans? Don’t worry, you’ll love it too. The decor is chic and understated, someone who doesn’t know much about Harry Potter might not even notice the theme at first. But the subtle touches, from the Sirius Black poster on the window to the small bobbleheads of the characters scattered throughout the small restaurant clue fans in. The mouthwatering brunch menu boasts twists on classic breakfast options. Try buttermilk chicken and herb waffles with bourbon-soaked apples and house pickles or bread pudding french toast with “Harry Porter” caramel, apples and whipped mascarpone, or Nutella and bananas.
The real gem of this brunch spot is the downright magical list of cocktails. Lockhart specializes in flaming cauldrons of colorful cocktails, meant to be shared. Choose between two cauldrons, the “Befuddlement,” a red, blue and purple concoction of seven different liquors, including peach vodka, cherry brandy and Bacardi, or try the “Butterbeer Pitcher,” named after the drink of choice of of-age Hogwarts students and their professors, full of “cinnamon infused toasted butter” liquor ginger beer, ginger ale and topped with a toasted marshmallow. Scroll to the end of the Instagram post to see a cauldron of cocktail on fire, because that’s normal here.

Explore the most Instagrammable alley in Canada

Toronto’s Graffiti Alley is like no other. Off Queen St., the street named by Vogue as one of the most trendy neighborhoods in the world, you’ll find what feels like a free outdoor museum of modern art. Take a stroll, admiring design after design, from vibrant flowers, a brilliantly-colored depiction of an underwater sea world, portraits of animals, people, and pop-culture icons alike. 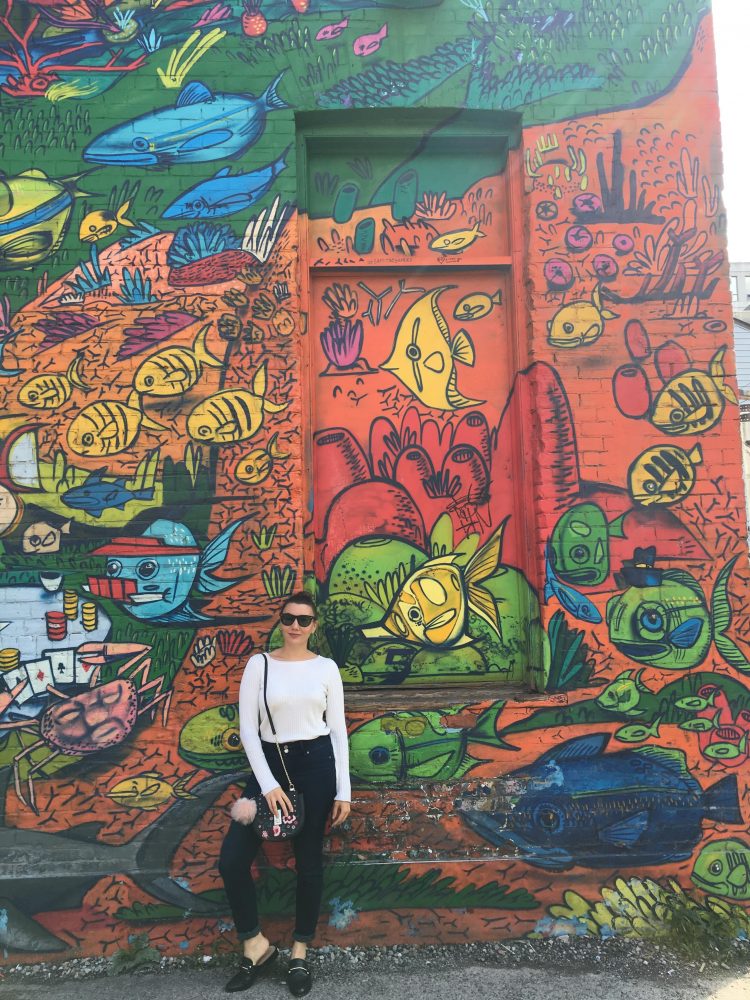 256 Augusta Ave. // Website
This German diner crafts customizable pockets of veal, lamb or chicken, veggies and cheese, as well as bowls and currywurst. It’s like a Chipotle for German food, that also sells German “bier,” wines and ciders. What sets this diner apart from the others is its bathroom (how many guides have you read that tell you where the best bathrooms are)? Enter the small, one-person, unassuming bathroom and at first you’ll think, that Step Out Buffalo guide bamboozled me. Then press the large blue button near the toilet, and you see what happens. Don’t trust me? Watch this video for a spoiler, or go see it for yourself. 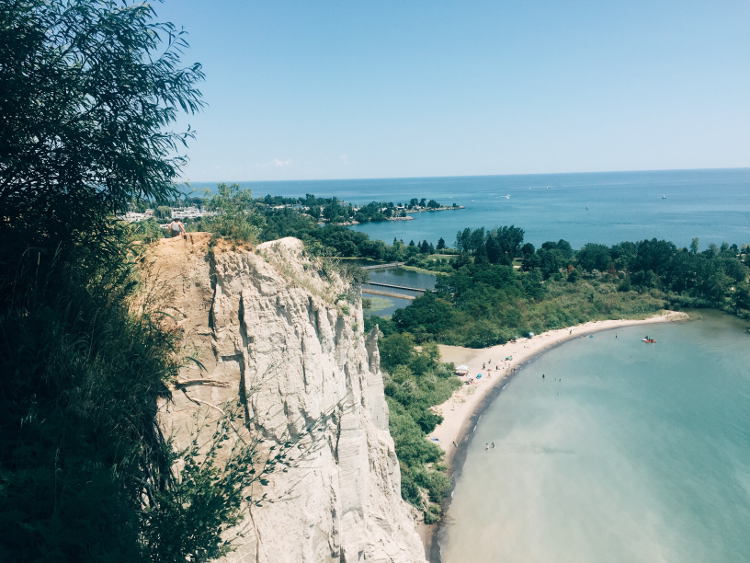 Feel on top of the world at the Scarborough Bluffs

For some fresh air and breathtaking views, drive about 20 minutes outside the city to the Scarborough Bluffs. You might think you’re in Ireland or Iceland, but it’s just Lake Ontario. The bluffs overlook cerulean blue, crystal clear water and the lake for as far as the eye can see. It’s not for the faint of heart, it’s a pretty daring view, but it’s oh-so-worth-it to feel on top of the world, at least for a few minutes.
If you don’t mind a long walk, trek the tucked-away paved road to visit Bluffer’s Park, the beach at the bottom of the bluffs. Looking up to the bluffs is equally as beautiful as looking down. The beach is free, so sunbathe or swim in the water, and enjoy the serene beach and mind-blowing views. 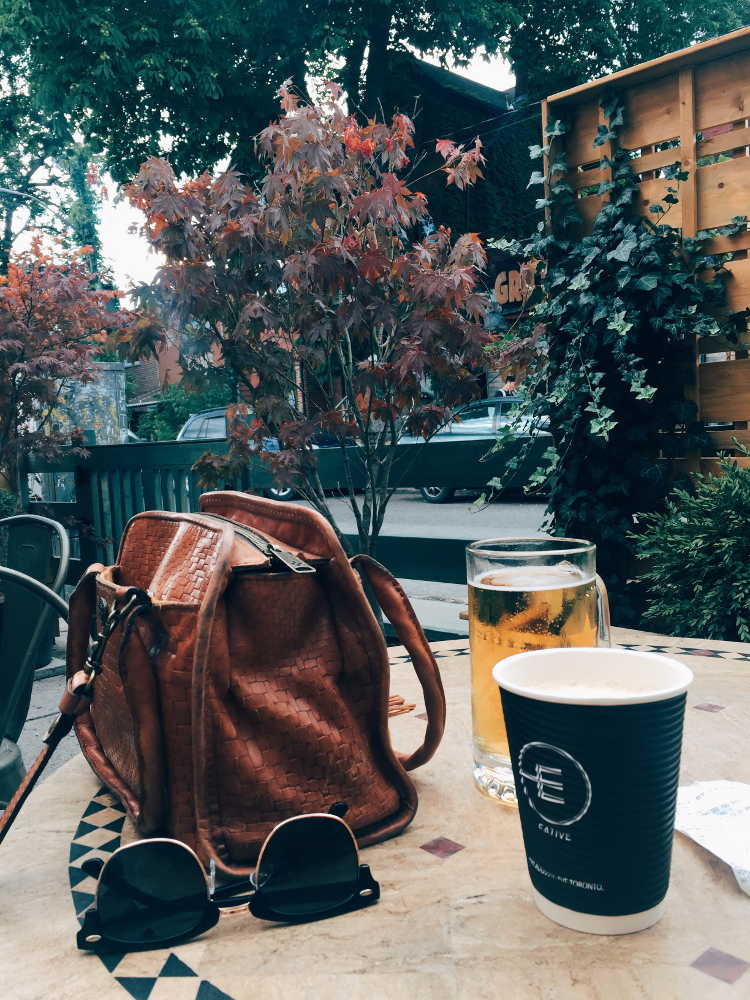 Website
The Kensington Market is wonderfully diverse, with stands and shops representing an array of cultures. Here you’ll find pretty much any kind of food under the sun. Wikitravel describes it as a “sensory trip around the world.” I recommend getting a small amount of food at a few different places. Try a fried Jamaican patty from a quaint shop called Golden Patty, and Thai ice cream dessert rolls at Frosty Roll, adorned with fruit and so darn pretty, you might not even want to eat it.
Words like “bohemian,” “hipster,” and “trendy,” are often used to describe the Kensington Market, but it’s difficult to put what makes the market so special into words. There is more to do than eating a cultural array of foods or drinking at any one of the distinctive cafes. This neighborhood is also home to eccentric vintage and secondhand shops, boutiques and art galleries. Kensington is somewhere to explore every time you visit Toronto, and you’ll always see something new. 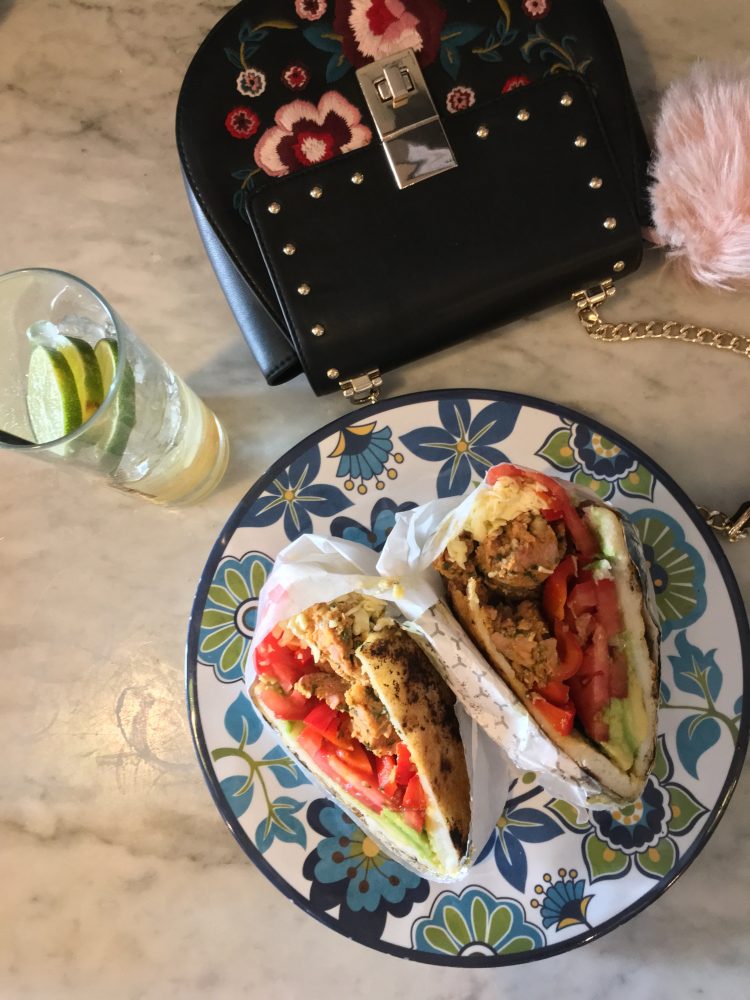 Laugh out loud at the Comedy Bar

945 Bloor St. // Website
Underground on Bloor Street, walk into the dimly-lit and hilarious Comedy Bar. The bar, which has shows every night of the week, sees all kinds of comedy, including improv, sketch comedy and stand-up. During intermission and after the show, hang out with the comedians at the bar over a pint of Guinness. Bonus: Most shows only cost between $5 and $15.
Visit their website for a list of shows.

Bring out your competitive side at Snakes and Lattes

630 Bloor St. W // Website
A library full of every board game you could imagine, from classics to elaborate games I guarantee you’ve never heard of. Coffee. Beer. Friends. Players nearby ready to flip boards out of frustration. Players nearby laughing over their game and competitive friends. Snakes and Lattes brings out the competitive edge in everyone, with their one-of-a-kind business model of a library of board games, all accessible to you to play for $8, food and caffeine or alcoholic drinks. Visit one of their events or bring some friends for a game night of your own.
Listen to their podcast, updated several times a week, to become a board game aficionado and blow all your friends out of the water. If that’s your kinda thing.

Francesca was a Step Out Buffalo intern in 2017.
Find More ➭ Step Out College, Step Out Road Trip Series