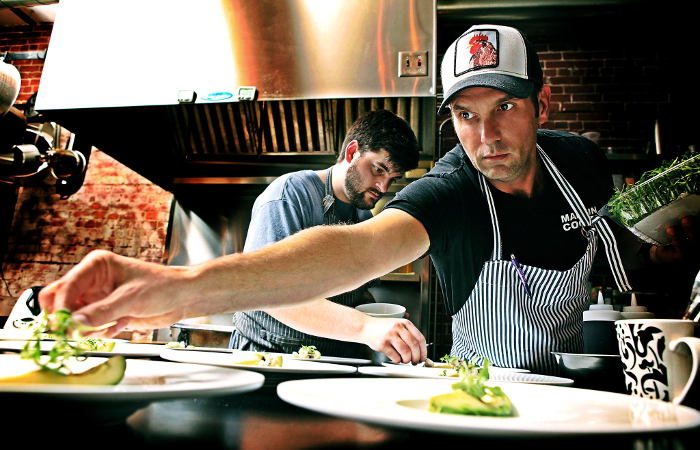 Martin Danilowicz does not give a f**k.
That much was clear when we chatted prior to the opening of Roost, his new restaurant on Niagara Street (in the Crescendo building) that acts as a follow-up to his wildly successful Martin Cooks.
Thanks to the exploding popularity of foodie culture and his own recent culinary success, Danilowicz can afford to have such a cavalier attitude. Diners are so well-informed, so willing to give an able chef the benefit of the doubt – they’ll let a proven quantity like Danilowicz serve them all kinds of mad concepts – so long as they hit the palate like a ton of delicious bricks.
“Over at Martin Cooks, we used to serve lines of blue cheese powder on a mirror with a credit card. Fifteen years ago, the owner of the restaurant that I worked at would have said there’s no f**kin’ way you’re going to put that on the menu,” Danilowicz thundered. “I’ve always felt that food is very emotional. So if you were offended by that – then I drew an emotion out of you.”

Danilowicz isn’t just looking to offend, however. Far from it, he told me. The chef said intimacy and communal vibes were what people responded to over at Martin Cooks, and Roost is just a natural extension of that energy.
“(One night at Martin Cooks) there was this woman, she was 90 years old, it was 11 o’clock at night and she was eating dessert,” he recounted. “She looked at me and she goes, ‘I’ve never been more comfortable at a restaurant in my life and I don’t want to go home.’
“I want people to come here and just enjoy themselves,” he put simply.
In pursuit of that lofty goal, Danilowicz has focused his attention on the small details of a typical dining experience. A floor-to-ceiling rooster mural by prolific local artist Chuck Tingley greets you as you walk through Roost’s front door. Liquor bottles are kept in racks below the bar so that you might see a familiar face across the room on a busy night. Custom metal furniture by Brian Wilcox of Reclaimed Innovations gives the space a rough-hewn urban feel. Massive photos of Burt Reynolds and Farrah Fawcett are waiting to greet you in the restrooms, a bit of dry bathroom humor, if you will. 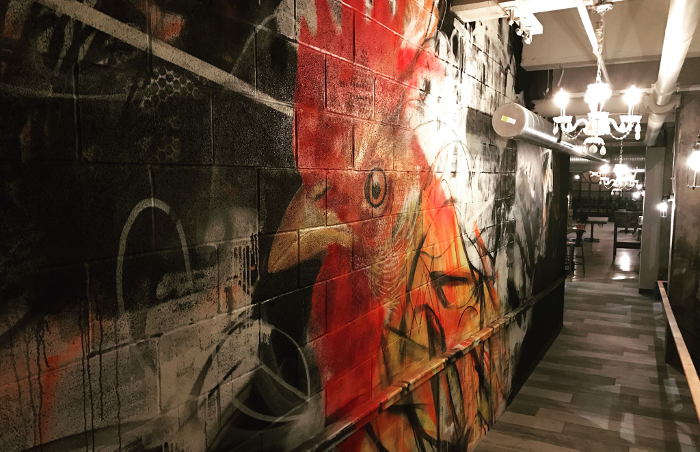 Danilowicz has also outfitted his new kitchen with a few crown jewels of imposing culinary equipment. Stalking his new space like a fox in a henhouse, Danilowicz took me from Roost’s temperature-controlled wine storage unit, to its brilliant rotisserie, to its wood-burning stone oven, which he said is capable of reaching 1,200 degrees Fahrenheit.
The open kitchen at Roost will be using every tool at its disposal, years of experience, and buckets of imagination to serve rustic, upscale comfort food. Wood-fired clams, crispy crust pizzas, and succulent rotisserie duck are all on the menu for opening week, but Danilowicz said to expect a menu change every two to three weeks.

Roost is the latest in a wave of chef-driven restaurants opening across the Nickel City, and Danilowicz sounds more than happy to be cooking a menu driven by his own experience and expertise.
“More and more people are making the food that they want to make” in Buffalo, Danilowicz said. “Where it used to be, well, you need to have chicken on the menu, you need to have a pork on the menu, you need to have a salmon on the menu. Now, it’s like, I’ll make whatever the f**k I want.”
The outspoken chef said he’s also proud to be staking out a spot on a somewhat desolate stretch of Niagara Street. He added that he’d like to see more restaurateurs take a similar risk when it comes to picking a location.

“We took a huge chance on Connecticut Street and everyone told me I was an idiot to open up a high-end restaurant in the West Side of Buffalo,” Danilowicz said, referring to Martin Cooks. “As soon as we moved in and became remotely successful, everyone wanted to be on Connecticut Street.
“Everybody told me there’s no way I’m going to be able to do this here, on Niagara Street,” he continued. “We did it and the neighborhood now – everybody wants to be on Niagara Street. I think that I would like to see more people open restaurants in neighborhoods that aren’t maybe so… get away from Elmwood Avenue, get away from downtown.”
“It’s cost-effective,” he added. “I moved into this space for almost what my rent was on Connecticut Street and this place is three times the size.”
If guests find Roost three times as impressive, Danilowicz just might have to figure out a way to get them to go home.
To follow the progress of Roost and for more info on hours and menu changes head to their Facebook page.