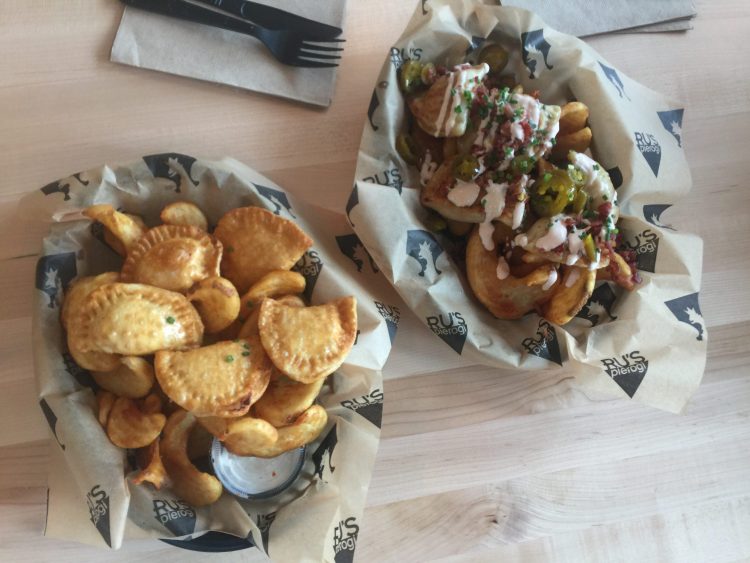 Everyone’s all pumped up for fish fry season, but here’s a bold thought. What if you don’t like them? Or you’re sick of the everyday basic fish fry? Yeah, believe it or not those people exist.  We’re starting a series through the lent season to give you other options when you’ve had enough of the basic, average fish fry meal.

Ru’s originated in Buffalo when Chef Andy Ruszczyk decided to put his own spin on his grandmother’s traditional pierogi recipe. When he threw in modern-day ingredients, creating new flavors and even dessert options, he immediately caught the attention of locals looking for something other than the everyday farm cheese option (although, those are still bomb). From idea to execution, now there’s not only a popular restaurant but a food truck and packages of Ru’s Pierogi  sold in grocery stores.

So what’s the fuss about? The awesome, unusual flavors like the banana pepper and cheese basket ($11) that are served deep fried and crispy with sour cream and fries, or the goat cheese basket ($11) sauteed and served on a bed of peppery arugula and drizzled with a balsamic glaze. They even serve dessert pierogi, including apple ($5), which are fried and coated in powdered sugar and served with a side of ice cream and caramel. It tastes exactly like apple pie and you need this in your life, like yesterday.

Keep an eye out for their daily pierogi specials that are always changing and check out the sandwiches as well. They have a tasty vegetarian option featuring fried banana pepper & cheese pierogi on the sandwich called, The Rustic Parm ($7). The Rustic Parm features pierogi on crunchy garlic bread, covered in red sauce and plenty of creamy mozzarella cheese, served with a side arugula balsamic salad. Don’t forget, they also have a bar where you can order wine, hard ciders, and locally brewed beers. Yay for fast casual restaurants with alcohol!