Safe Harbor Marina: How to Get On a Boat This Summer 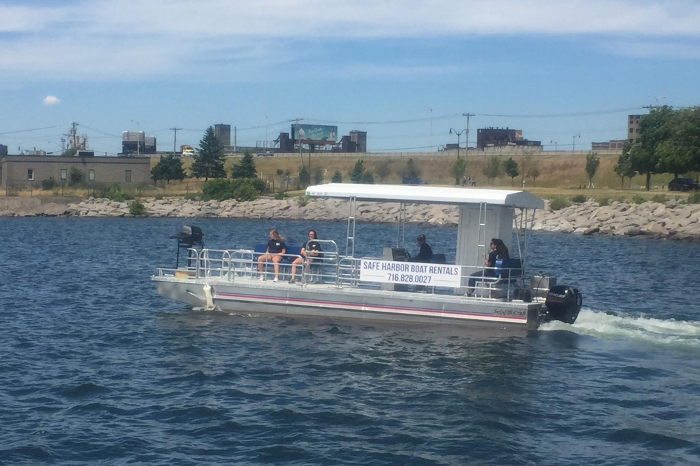 How many times have you walked along the waterfront with your dad / mom / friend / hubbs, his or her eyes glazing over staring out at the sailboats, motor boats and other watercraft going by?
“Someday,” he/she says, drawing in a long, deep breath and letting it out slowly. “Someday…”
Owning a boat is a lot of work and it can get expensive. There’s a reason boats have a reputation for being ‘holes in the water that you throw money into.’ It’s totally understandable if you just don’t think owning a boat is worth it.
Thanks to the new boat rental program at Safe Harbor Marina, you can still get on the water without committing to owning a watercraft.
The marina now has 30-foot pontoon boats for rent. Each boat has room for 16 people, an on-board bathroom and a grill. Rentals also include life jackets, air horns and anything else required by law. It’s important to note here that the laws for drinking and boating are the same as they are for drinking and driving. Basically, you’ll need a designated driver if anyone is consuming alcohol.
You must be at least 21 years old to rent a boat, and everyone under 12 must wear a life jacket.
The boats can be rented for either four or eight hours, which is more than enough time to travel from the marina, located next to Charlie’s Boat Yard, all the way up to destinations in Black Rock and Riverside and back. For instance, you could go up to Eddie’s River Grill, grab some food and drinks, and then head back down with plenty of time to spare.

While Safe Harbor Marina requires you to stay inside the break wall, you can still take the rental boats out for a nice long day on the water. Each boat has a ladder going off the side for swimmers, which means the boats are ideal for an afternoon of swimming, grilling and drinking. It’s a perfect day on the water for families, friends or even business groups looking to hold a unique team-building event.
“We want boaters to stay toward Black Rock. The Niagara River flows really fast and you kind of need to know what you’re doing in there,” Safe Harbor’s Matt Prime told me one breezy sunny afternoon out on one of the marina’s docks. “There are some shallow spots and it can get kind of sketchy in there.”
“You could maybe go out, throw down the anchor and swim off of it; maybe have some drinks, have some fun and make some food. It’s a slow-moving boat. You could tow a tube behind it, but it’s not going to be the wildest tube ride of your life.”
On the day of my visit, the winds were kicking up so much, a small craft warning was issued, which means boat rentals for that day would have been rescheduled. Prime said the marina does not offer refunds, but they will gladly reschedule your rental in the event of inclement weather.
The marina is currently in discussions with a local sailing school so that it can eventually offer licensed captains to include with boat rentals. The captains would essentially be able to serve as a designated driver for bachelor/bachelorette parties.
The boat rental program is in its first season and so far, they have proven quite popular.
“It’s a good time,” Prime said. “The people who have taken the boats out have loved it.”

If you’d like to get out on the waters of the outer harbor but don’t want to do the pontoon boat thing, there are also kayaks for rent via Outer Harbor Kayaks rent and even a boating timeshare through Freedom Boat Club.
The club is a national membership-based boating club that is new to Buffalo, but has been around since 1989. To get out on the water, members just reserve a boat, show up and take off.
“You don’t have to deal with any hassle with the boat,” Prime said. “You just show up and it’s ready for you. It’s got gas. They do all the maintenance and everything for you.”
With 100 locations with more than 1,000 boats around the country, members can also reserve a boat in say, Miami or Boston.

Safe Harbor Marina is launching its boat rental program ahead of major renovations planned for this fall. Starting around Labor Day, the marina is kicking off a $10-million expansion, which will include new docks, an expanded patio for Charlie’s Boat Yard and resurfaced parking lots.
“The new docks will act a lot better with the changing water level,” Prime said. “Because when the wind changes, the water level changes really fast, and these docks, with the way that the poles are, they get hung up and caught a lot with a change in water level. You also have to put these in and out every fall and spring. So, next year we won’t have to take them out in the fall. It’s a lot less labor intensive and it makes the boating season longer for those who want to stay in or get in earlier. They can get in as soon as the ice is gone in the spring, and they can stay in through the fall until the ice shows up.”
Safe Harbor is operated by a Tennessee- based company that has a lot of experience in waterfront development. Prime, a native Western New Yorker and father of two, said he’s been impressed with what the company has planned.
“Everything that’s being done is being done professionally,” he said. “So even the parking lots and all that stuff, it’s being done by engineers. I mean it’s not just a bunch of guys figuring what they think might be better. It’s people that have been doing it for a long time.”
Furthermore, New York State is in the midst of a $3.7 million rehabilitation of the outer harbor breakwall and revetment. This breakwall eventually will include paved walking and bike paths, shaded seating areas, a fishing platform and lighting. The southern revetment is being stabilized and will include increased fishing access.