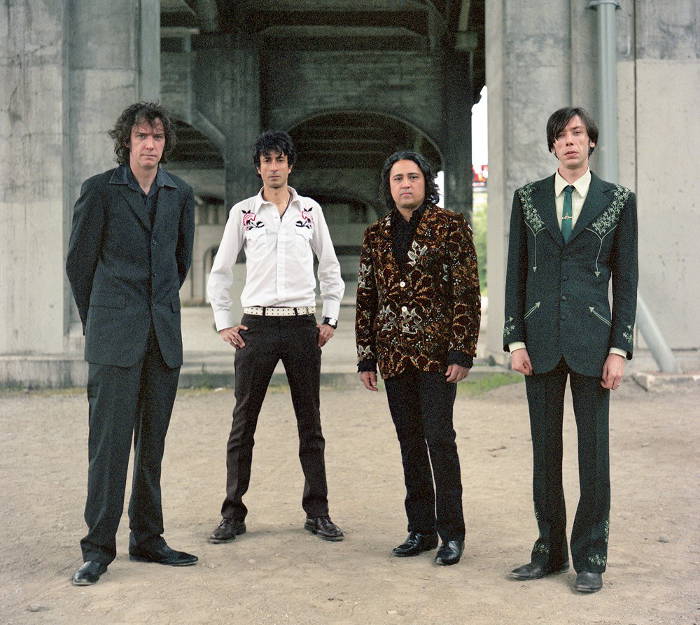 The Sadies / Photo from Facebook by Derek von Essen

“We like The Sadies because they can play ANYTHING better than anyone else. Surf, cool cowboy psychedelia, electric bluegrass, spaghetti western soundscapes, garage punk, whatever,” – Bloodshot Records

There are some bands that come along, drop one extremely massive single, and then drop off the face of the Earth (The Ting Tings, anyone? Anyone?) Then there are bands like Toronto’s The Sadies, which consistently grind out quality album after quality album, earn the respect of those ‘in the know’ but lack that one breakthrough radio single to make them a household name.

It would be easy to dismiss these guys for never having “made it big” – if it weren’t for the company they tend to keep. The Sadies have earned a reputation as one of the world’s greatest current backing bands, and since their start in the mid 90s – they have backed up alternative rock legends Jon Spencer, Neko Case and The Tragically Hip’s Gord Downie among others.

The Sadies are able to pull off these backing stints so well because they can smoothly switch gears like a finely-tuned muscle car. One moment, they’re rocking a slow-burning blues boogey; and the next, they’re riding a double-time surf riff. It’s all seamless and it all just makes sense.

The band’s last album, Internal Sounds, dropped just over one year ago and earned a number a rave reviews, including from notable websites like Rolling Stone (“What can’t they do?”) and exclaim.ca (“the Sadies continue to live up to the hype”).

For their upcoming show at Buffalo Iron Works, expect the band to pull out every musical weapon in their arsenal and selection of songs from their deep, deep back catalog. These guys may not have that one song that everybody came to hear, but they do know how to mix it up and keep a party moving.

Most importantly, it’s almost spring time and The Sadies show is a great way to get ready for spring and concert season in Buffalo. So head out to Iron Works and shake off that winter rust.

Your Official Guide to Supporting Local Restaurants with the appétit App

Guide to 4th of July Events & Celebrations in WNY 2022

7 Fast-Casual Date Night Spots with a Bar in WNY

Guide to 4th of July Parades in WNY