Step Out Buffalo & WNY Artists are teaming up to bring you a brand new limited edition design, benefiting a new charity each month and showcasing Buffalo and Western New York.

June’s collaboration features local artist and muralist Casey Milbrand, the creative mind behind numerous murals across WNY including “Lookin’ Good” on Hertel Ave in North Buffalo and “Greetings From Buffalo“ on Ellicott Street in Downtown Buffalo, which were the inspiration for this month’s merch.

The “Lookin’ Good” and “Greetings From Buffalo” designs are available on a variety of apparel and accessories including but not limited to adult t-shirts, tank tops, crewneck sweatshirts, and pullover hoodies, as well as youth and baby items for the entire month of June. New this month we are thrilled to introduce face masks featuring Casey’s designs as well as snapback and baseball caps. Shop the collection here!

Remember, you have just one month to get these limited edition designs, so don’t forget to place your orders by June 30, 2020. 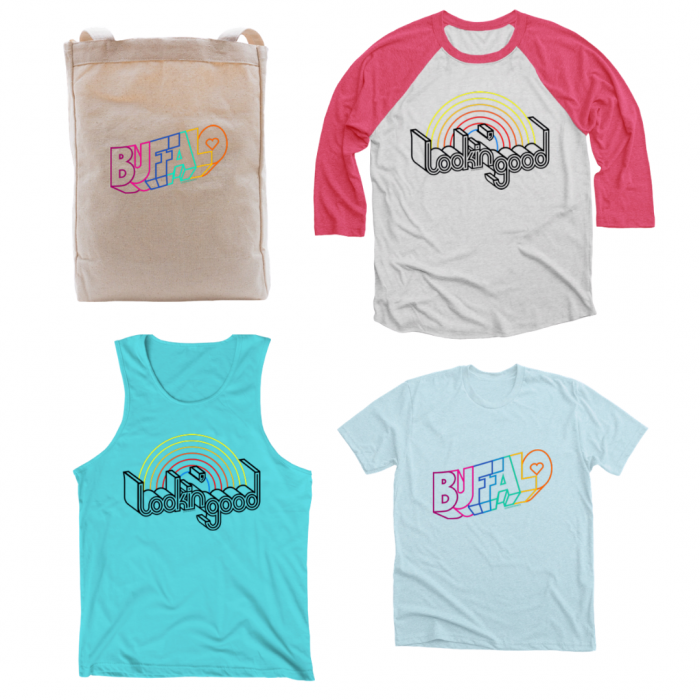 In Light of Current Events

The Step Out Buffalo x Artists Merch campaign was created to help spotlight local artists as well as local charities. Our artists and charities are coordinated months in advance, however in light of recent events we wanted to make sure we were supporting our black community as much as possible. To celebrate Pride Month and honor our black community this month a portion of each and every item sold will benefit two charities – The Pride Center of Western New York which was originally on our schedule and The MOCHA Center, a local organization which offers social events and other programs focused on improving the health and wellness of LGBTQ people of color—in mind, body, and spirit.

More On Our June Charities

The Pride Center of Western New York is a community-based organization focused on the health and well-being of LGBTQ+ people. The Pride Center envisions an LGBTQ community in which individuals feel safe, secure, and affirmed where they live, work, worship, and play.

Photo courtesy of The Pride Center of WNY

The MOCHA Center was founded in 1996 as the Men of Color Health Awareness Project, The MOCHA Center has worked to educate Black and Latino men in Rochester and Buffalo about living a sex-positive life. They offer social events and other programs focused on improving the health and wellness of LGBTQ people of color—in mind, body, and spirit. 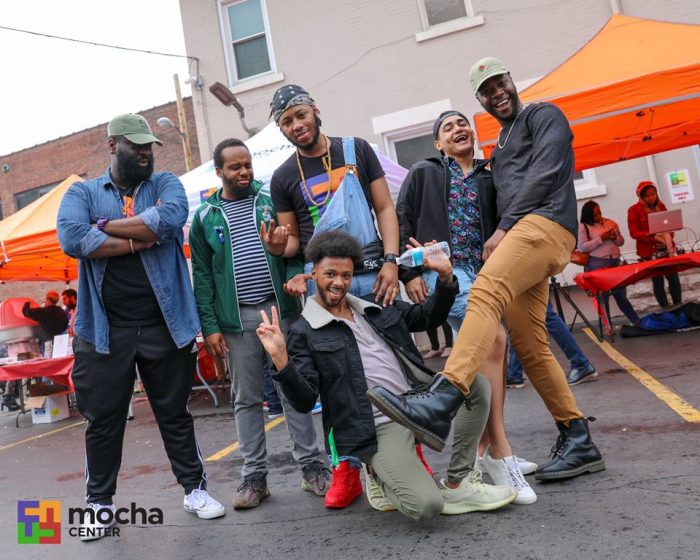 Photo courtesy of The MOCHA Center

For two years Casey worked side by side with the North Buffalo Organization (NBO) getting his second public mural off the ground. This project was made possible thanks to a grant by Art Services Initiative of WNY, as well as, donations from the community and local businesses. The phrase “Lookin’ Good” appears to be riding a retro wave of momentum, meant to celebrate the old and new projects that are fueling North Buffalo’s recent wave of success. The mural’s vibrant colors pay homage to the colorful neon marquee of the North Park Theatre up the street on Hertel Avenue. 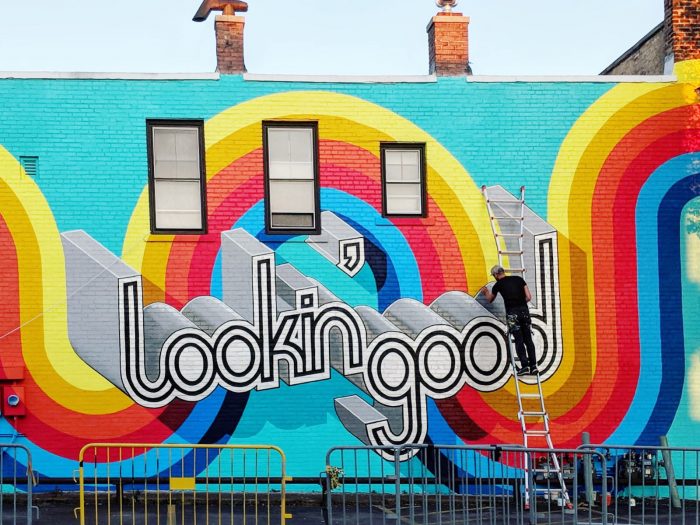 After seeing other postcard “Greetings from” murals in other cities like Austin, TX, Casey wanted to create a colorful mural that reflected the resurgence of our city. The main concept behind the mural design was “A City On The Rise.” The design was inspired by the beautiful Art Deco sunburst stained ceiling within the Common Council Chamber inside our City Hall. The final mural was unveiled on November 5th, 2016 where Milbrand used the opportunity to propose to his fiancé Jason. Post completion the mural won the 2017 PBN People’s Choice Award and has aired nationally on the Travel Channel and ABC’s Bachelorette. Mibrand’s first large-scale mural was made possible thanks to donations from his family and friends from across the country.

Casey William Milbrand (American, born 1981) is a Buffalo-based artist primarily focused on large-scale murals, pen and ink illustration, and interactive sculptures. Milbrand received his Master of Architecture degree from the Illinois Institute of Technology in 2008. His architecture background can be seen in the three-dimensional quality of his work and the precision of his hand painted lines, which has become a signature part of his style. With each project, Casey strives to re-define a public place and create room in which to play and experience the city in new ways. In 2016, Casey unveiled the Queen City’s iconic “Greetings from Buffalo” mural, which has become the go-to place for tourists and residents alike who are looking for the perfect selfie to show off their Buffalove. His other colorful murals include the “Lookin’ Good” mural on Hertel Avenue, the “As Is” PRIDE mural at D’Youville College, and the “Let’s Fall in Love” mural on Old Falls Street in Niagara Falls, USA.

To learn more about Step Out Buffalo x Artists and shop the full June collection by Casey Milbrand, head to our shop!

A group of Step Out Buffalo team members worked together to create this post from research and writing to editing and imagery. Thanks for reading!
Find More ➭
×