Exploring Buffalo: The Tale of the Greatest Auto Race in History

Things to Do, Tours & Walks 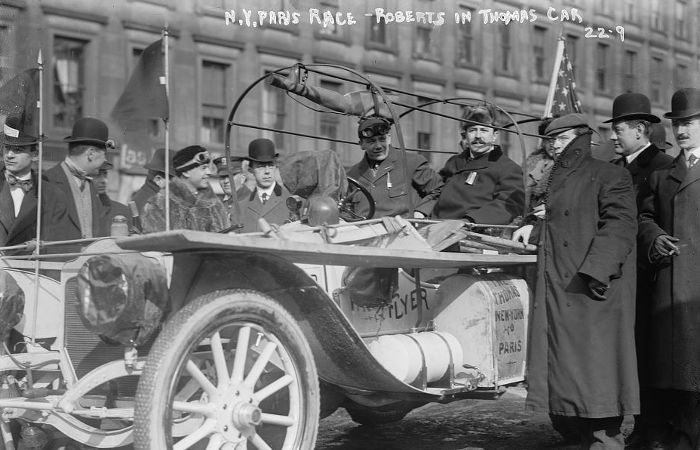 Tale of the Greatest Auto Race in History

You’d be amazed at the stories that are tied to Delaware Avenue and its residents. The historic neighborhood often connects Buffalo with national and international stories. Take 841 Delaware, now the Himalayan Institute, once, the home of Edwin Ross Thomas a man with a company and a car that played a huge role in the greatest auto race of all time.
“The Great Race” began on February 12, 1908, as six cars from France, Germany, Italy and the U.S. attempted to drive over 20,000 miles from New York City to Paris . . . by way of Siberia.


Needless to say, only three cars finished the race – but one of them was from Buffalo.
The Thomas Flyer, representing the U.S., was a last minute entry picked right off the production floor of the E.R. Thomas Motor Company, located on Niagara Street where Rich Products stands today. Though it wasn’t custom made, like the other entries, the Flyer was the first of six teams to reach the West Coast and continued flying until a course change cut out the Bering Strait route.
Despite the speedy first leg of their journey, the team was unexpectedly behind about two weeks. Yet just as suddenly the nature of the race changed again. The Flyer was granted a 15 day grace period while the German team was penalized 15 days for sending their car from Utah to Washington State by train.
Once across the Pacific, Germany and the U.S. raced through unfamiliar, muddy, snowy and frozen foreign territory with Italy in third.
“In all its about as dangerous an adventure as any ever undertaken – one in which man and his machine are to be matched against the forces of nature, and matched against them in one of the longest of all long drawn out struggles of its kind.”

Ultimately, the German team arrived in Paris on July 26th, 4 days before the U.S., all the while probably knowing they’d be earning second place because of their penalty. Although, there was an incident that could have slowed the U.S. down quite a bit. Upon entering Paris, the Flyer was stopped by a policeman for not having a headlight on the car. Before he count make a full arrest, a nearby bicyclist jumped in and lent the team the light from his bike so they could reach the finish line.
It was on July 30th, after 169 days, that the American team, led by the Buffalo made Thomas Flyer, reached Paris and claimed victory. What makes the story even sweeter for Buffalo is that the lead mechanic and driver for half the race, was a Buffalonian by the name of George Schuster.
For more unbelievable stories about Buffalo’s Delaware Avenue and its residents check out The Inside Delaware Avenue Mansions Tour on Saturday, June 17 or a weekly exterior only tour of the Delaware Avenue Mansions! explorebuffalo.org/gilded-age-tours/
*Plus for so much more on the Great Auto Race of 1908 visit thegreatautorace.com.