Why We Still Need the Old Buffalo: The Story of Adolf’s Old First Ward Tavern 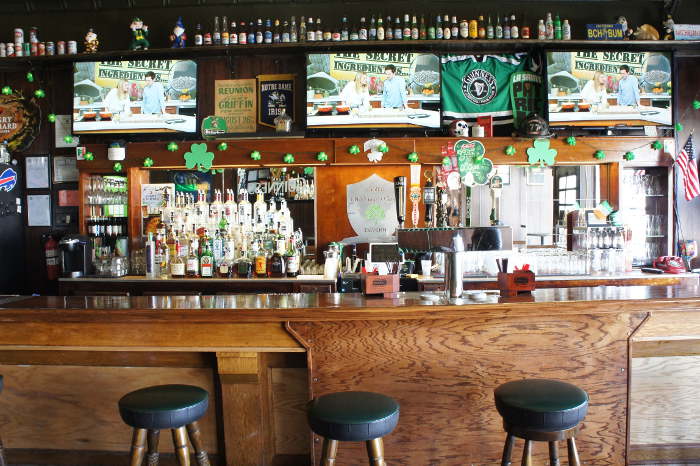 It’s nice to see all the culinary destinations pop up around Buffalo lately and it seems like Big City food trends are suddenly taking less time to reach our fair city (Hello, nitro cold brew on tap!). However, if you’re an old soul like me, your brow furrows at the thought of disappearing neighborhood corner bars, especially in the city.
They say Americans don’t know their neighbors anymore, and if that’s true, then maybe the loss of the corner tavern is part of the reason why. Your grandparents likely went to the corner bar to run into the neighbors and trade stories about the work day, as well as a bit of neighborhood gossip.
When Mike Burns, John Cywinski, and Brian Krause bought Old First Ward icon Adolf’s tavern in 2014, they knew they were buying that legacy of neighbors meeting neighbors, of families getting together to mark graduations, and of celebration after a big South Buffalo football game. Calling themselves The Tavern Team, the three owners came up with a motto for what is now called Adolf’s Old First Ward Tavern: “Bringing the old neighborhood bar back to the old neighborhood.”

On a recent trip to the old place, Mike Burns met me for a pint of Guinness and talked passionately about how his team’s commitment to tradition is already resonating with customers. “In our first 18 months, 95 percent of the feedback we got was, ‘I feel like I’ve hung out here forever. I don’t know what you guys are doing, but there’s something about this place,’” Burns said.
While the name Adolf may carry certain connotations these days, it didn’t as much back in 1934, when Adolf Baron opened a tavern in the heart of Buffalo’s Old First Ward neighborhood. Adolf opened his tavern to service the many Irish immigrants who flocked to the neighborhood for work at the grain silos along the Buffalo River. The silos served as repositories for grain shipped across the Great Lakes from the Midwest and in their early days, the silos were filled by hard-working hands and back-breaking labor.

In the middle to late 1960s, Adolf’s son Eddie took over from his father as both bar owner and lion of the Old First Ward. “Eddie ran an awesome place,” Burns said. “He had the 555 Social Club, which was a men’s social club here at the bar that we’d like to bring back. They’d have stags, a group of Bills season tickets, parties once a month and golf tournaments.”
Sadly, Eddie passed away around 16 years ago, and his wife Faye continued to run Adolf’s after his passing. After 13 years of dealing with an aging bar, bookkeeping and placing beverage orders, Faye decided she’d had enough – selling Adolf’s to the Tavern Team. Faye has happily stayed on as a bartender, and she greeted me on my recent walk through the front door. 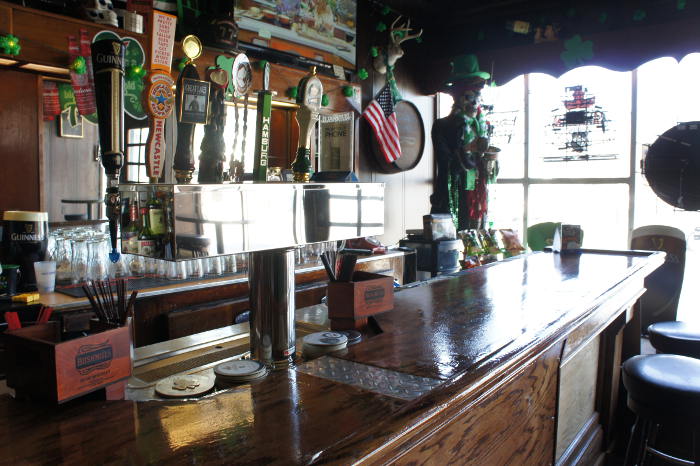 Since taking control of Adolf’s, the Tavern Team has replaced the barroom’s aging floor and taken out the drop ceiling, exposing a magnificent pressed tin ceiling that had sat hidden for years.  Burns said renovation will continue, and assured me that hardcore preservationists shouldn’t worry about a complete modernization of the old bar. However, some things simply need to go. “I want to leave the floor in the back room so bad, I do, but it’s beginning to crumble,” Burns told me.
Each change to the bar is done deliberately and democratically through an iterative process. The bar will be preserved as it was where possible and where updates are necessary – the team looks to emphasize the use of reclaimed wood and metal. One of the biggest changes is the tavern’s new back patio. Located where a decaying house once stood, the long fenced-in stretch features a natural canopy of tree limbs that softly sway in the breeze streaming over from Canalside.
From the back patio to the front door, attention to detail is a priority for the Tavern Team, Burns told me. That attention includes using proper glassware: A Guinness poured into a Guinness glass, a lager in a lager glass, a cider in a cider glass, a whiskey in a tumbler or rocks glass, and so on. “When it we first opened, we asked ourselves if glassware matters and I said it does to me,” Burns said. “Then when they started going to other bars, and coming back here they were like, ‘You know what – it does matter.’ “It’s interesting. My wife recently went out to dinner with a friend of hers, and she got a Smithwicks in an Angry Orchard cider glass,” Burns said with a chuckle. “So she said, you know what, a year ago I would have never noticed that.”

The attention to detail, passion for history and desire to foster a sense of familiarity is what the Tavern team is counting on to not only bring patrons through their doors – but also to make the bar one of their favorite stops.
“If you’re from Western New York, someone you knew grew up in a neighborhood like this,” Burns said. “Even if you’re from Amherst now, even if you live in Clarence now – your parents or grandparents grew up in the East Side, or in the Ward or in North Buffalo. This bar is not unique to the Ward. If you go to North Buffalo, there are Italian taverns just like this. If you go to the East Side, there are Polish taverns just like this. This is a part of how this city and this area was founded. So yeah, we want people, when they come here with their parents, to have their parents say, ‘Yeah this is like Jimmie’s that we used to go to.’ That’s what we’re going for.”

Burns said customers can expect to relax on the back patio by mid to late July. A kitchen will be up and operating by football season and Burns said people can expect it to produce unique twists on classic Western New York bar food. In the meantime they welcome outside food.
Most importantly, Burns said he and his team want people to feel comfortable walking in, regardless of how many people are in their party. He suggested that the bar is even a great place to stop in on your way home from work or if you’re just passing through the neighborhood. “If you stop in here alone, you might see someone in here or you might not, but you still have one or two and a couple laughs with whoever is working and you leave. It’s your place.”

Brett Llenos Smith is a freelance writer based in Buffalo’s Allentown neighborhood who has been covering local food and culture for Step Out Buffalo over the past six years. As someone with a multi-ethnic background, he has a passion for exploring and understand the many diverse corners of Western New York.
Find More ➭ Old First Ward, South Buffalo