Perfection? Seems so technical. Brilliant? Sure it applies but somehow misses the point. Magnificent? As in impressively beautiful, elaborate, or extravagant; striking? Yes, magnificent.

Chef Brad Rowell and the crew at Elm Street Bakery hit it out of the ball park at the inaugural Step Out Buffalo “Adventures in Food” event April 21st. We’re talking a Reggie Jackson, three home runs in the World Series type night. It’s hard to put into words how good the food was so we’ll just tease you with a list and some photos (by Machelle Pohlman). Feel free to drool. As good as they sound/look – double it. The eighteen different “Spanish” tapas with an Elm Street touch were quite simply magnificent.

In the interest of full disclosure this was a Step Out Buffalo sponsored event. Yes, we do have a horse in the race, but believe me when I tell you I could not possibly over state the magnificence of the taste, presentation and the entire evening.

This was the first in what we hope to be many Adventures in Food with Step Out Buffalo. Adventure #1: The restaurant was closed to the public. Advanced ticket purchase required, limited to 70 people. Half a dozen stations were set up around the restaurant where people helped themselves to tapas. There were two drink areas set up serving Spanish wines, cava, and house made sangria. Spanish music played from the balcony by The Troubadours. People sat, stood, walked, mingled, and chatted with staff about their amazing creations. It was hard to tell who was more excited, creator or patron. 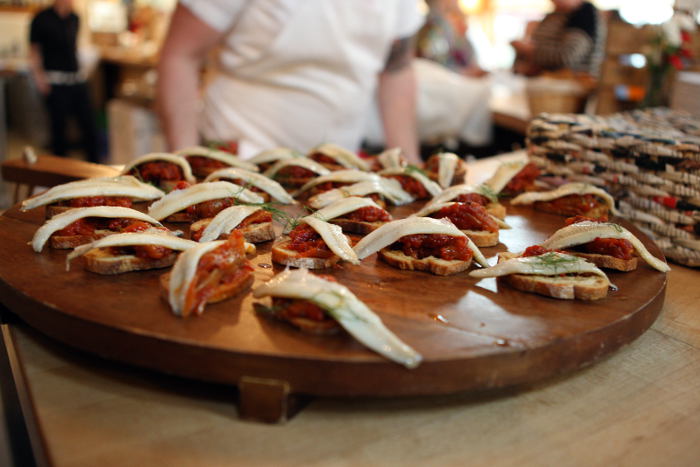 White Anchovies with piperade on toast / Photo by Machelle Pohlman

Tortilla Espanola with romesco and aioli

Tortilla Espanola is popular throughout Spain. It’s essentially a frittata made with onions and potatoes. Romesco is a traditional Spanish sauce made with bread, almonds, garlic, tomatoes, peppers, and olive oil.

The mussels are steamed and removed from the shell. They are then marinated with sherry vinegar, olive oil, celery, red onion, and garlic. The crostini is spread with a pimento aioli.

White Anchovies with piperade on toast

Piperade is a mix of roasted peppers, onions, garlic, and tomatoes stewed together. The finished product is slightly sweet and smoky. The piperade will be placed on toasted baguette and topped with a white anchovy. 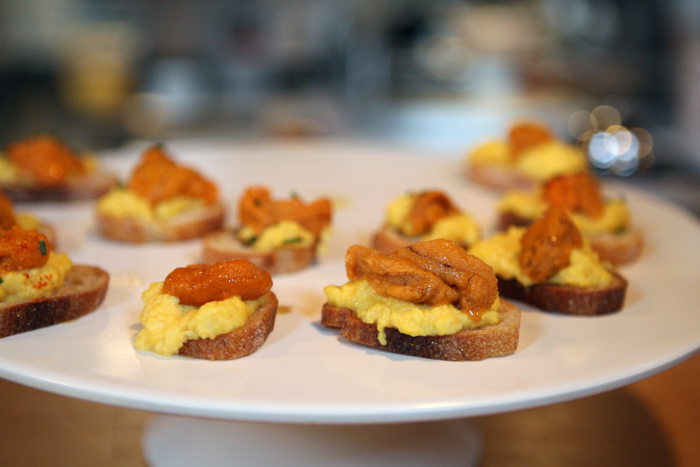 Eggs with sea urchin on baguette / Photo by Machelle Pohlman

Eggs with sea urchin on baguette

The eggs are soft scrambled with crème fraiche. We will place the eggs on top of toasted baguette and garnish with a piece of sea urchin, a splash of sherry vinegar and minced chives.

The chickpeas are cooked in salted water with dried chilis and garlic. We then sauté them with garlic, olive oil, pimenton and toss in the fresh pea shoots at the end. (Pimenton is smoked, hot Spanish paprika).

The chicken liver mousse is stuffed inside of dates and and the end is filled with a marcona almond. We will drizzle these with a sherry vinegar gastrique. 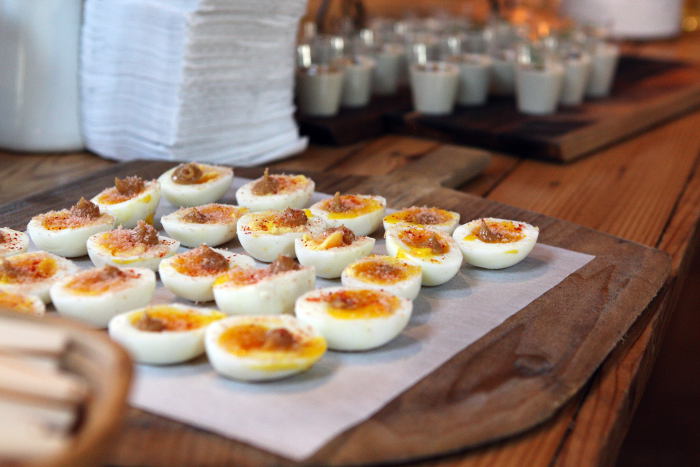 Ajo blanco is a chilled soup made with bread, almonds, fennel, garlic, olive oil, sherry vinegar, salt and pepper. It will be topped with marcona almonds and sliced grapes.

Spanish D.O. (Denominacion de Origen) standards rule that this Basque country favorite must be made with the raw milk of Laxta and Carranza sheep, lightly pressed and aged for 2-10 months. Smoking is an optional touch, reflecting a history of hanging wheels near a fireplace to dry. Ours is lightly smoked, and aged only 2-3 months. We like the supple, toothsome texture at this point and the subtle sharpness before it becomes hot with more age. The special sheep give exceptionally rich, fatty milk, resulting in a buttery mouth-feel and an intriguing gamy character. Best enjoyed hearthside with a mug of hard cider or a fruity Spanish red. House made membrillo (aka quince paste) is spread on crostini and topped with a small wedge of idiazabal.

Eggs are soft boiled and sliced in half. The garlic confit is pureed until smooth and will be dolloped on top of the egg. The egg is then topped with grated mojama (Cured Spanish tuna loin).

Made using the loins of the tuna by curing them in salt for two days. The salt is then removed, the loins are washed and then laid out to dry in the sun and the breeze (according to the traditional method) for fifteen to twenty days.

It is usually served in extremely thin slices with olive oil and chopped tomatoes or almonds. In Madrid mojama is very popular mid afternoon tapa and is served with a short beer and olives. 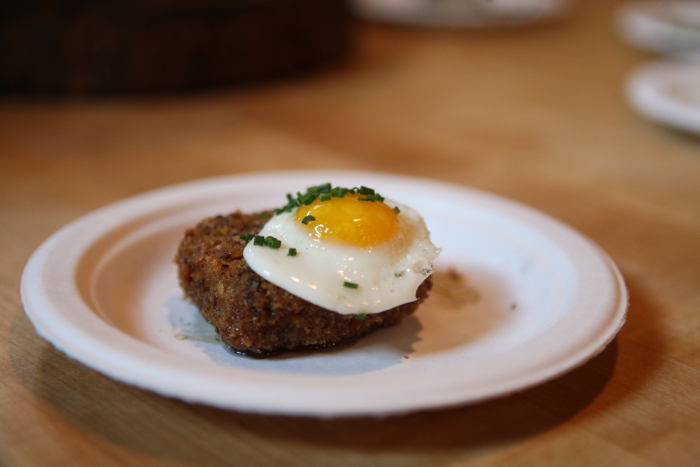 House made salt cod is cooked with milk, shallots, garlic, olive oil, and potatoes and parsley. This is roughly pureed together and then breaded with bread crumbs that have been mixed with vegetable ash. The croquette is then fried until crispy. We will dollop with an aioli made with roasted oysters and sprinkle with pimenton.

Pig heads are cooked with mirepoix, and white wine until tender. We then pull the meat and toss with roasted shallots, roasted garlic, thyme, and Dijon mustard. The meat is cooled and then cut into small squares. We then bread and fry them until crispy. We top them with a puree piquillo peppers ( a traditional Spanish pepper) and then a fried quail egg. 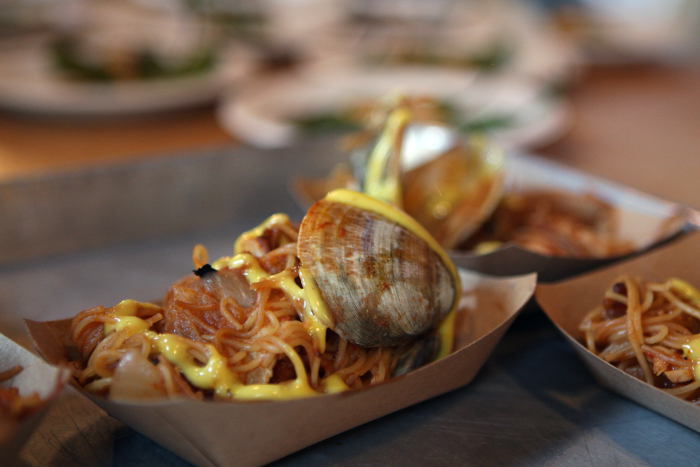 This fideo is prepared with a tomato broth, toasted pasta, chicken and clams. This is all roasted in the wood oven and dolloped with saffron aioli.

Head on tiger shrimp are roasted in the wood oven with garlic, pimento, sherry vinegar, and parsley.

Peppers are roasted with olive oil and salt. They will be served with salbitxada (sal-bit-chada), a Spanish sauce made with chilis, almonds, tomato, garlic, egg yolk, and canola oil. 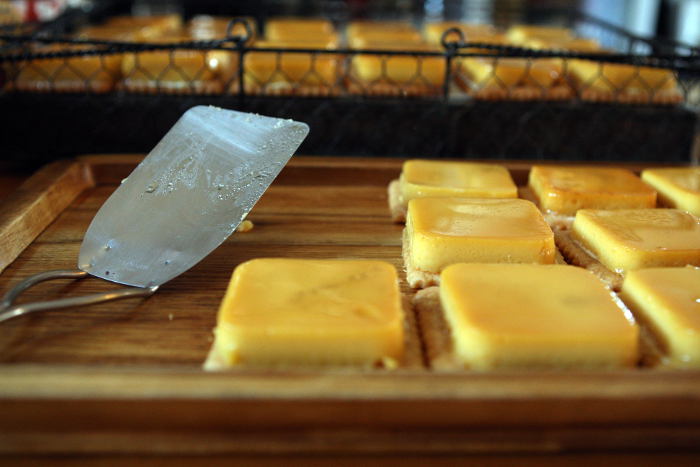