New: The Big Easy Brings the Bayou & NOLA to Buffalo

After months of delays and a lot of anticipation here at Step Out Buffalo, The Big Easy is finally open starting at lunchtime on Saturday, May 28th and set to bring some Louisiana classics to Buffalo’s Midtown Main Street area.
There have been a lot of great sit-down joints opening up over the past couple years, so it’s refreshing to see that The Big Easy take more of a fast-causal route. It’s a po’ boy shop at heart, which may be a novelty up here, but down in New Orleans – there’s one around every other corner.
Owned by Sam Davis, a local criminal defense attorney, the place has the look of a Jim’s Steakout during Mardi Gras and there’s no reason to expect that to change – given the working class nature of the surrounding neighborhood. But, what The Big Easy lacks in front-of-the-house flair will more than be made up for in the kitchen.

The Big Easy / Step Out Buffalo

In addition to po’ boys, the restaurant features casual Southern Louisiana fare served up by Baton Rouge transplant Taralyn Stephens, who’s only been living in Buffalo for the past couple months. Stephens told me it’s going to be a matter of trial and error to see which of her down home specials will catch on up here.
“Stuff like grits-and-grillades, shrimp-and-grits and crawfish etouffee I’m doing as daily specials, just to see what everybody in the area thinks of it because it’s a little different from the norm here,” she said.
For one thing, Buffalonians typically don’t know and don’t care about the difference between Creole and Cajun food. While Stephens has been living in Cajun country for much of her life, she told me she’s going to be sprinkling in some classic Creole influences.

“A simple way to explain (the difference) is, Creole is more city cooking and Cajun is more country cooking,” Stephens explained. “But Creole, if you want to get more specific about it, has a lot more of the tomato-based foods. So you’ll have a jambalaya that is Creole that’ll have more tomatoes in it and a Cajun one won’t.”
Chef Stephens told me preliminary soft openings at The Big Easy have gone well, with people getting mad that the restaurant isn’t open yet. She said her food goes a bit lighter on the spice compared to some other local Louisiana food joints. She added that people looking for a Friday fish fry may want to consider The Big Easy as an alternative to their usual routine.
“People are going crazy about the fish,” Stephens said. “I know haddock is very big around here, but I do catfish, and I have a lot of people are shocked by how much they like the different breading on my fish.” 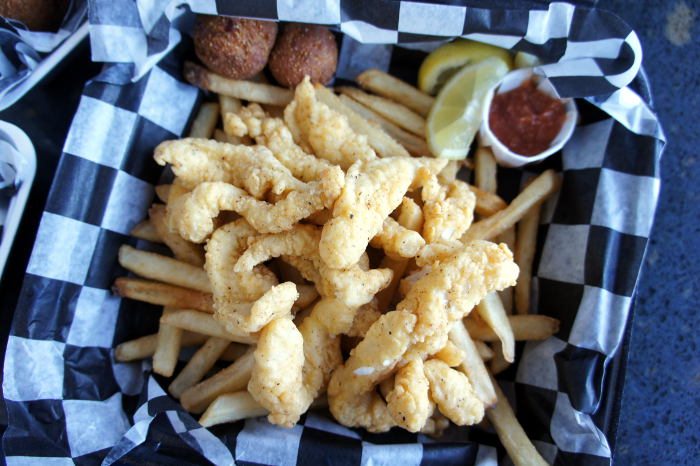 One Creole dish that isn’t all that popular down in New Orleans that seems set to explode in popularity up here, Stephens told me, is grits and grillades.
“People are crazy about it!” she said. “And I’m like, why? I mean it’s great, it’s amazing, but I’ve had so many people want just that. I guess it’s because it’s something that’s heavier and probably because it’s cooler here than it is back at home.”

“So we wouldn’t want to be eating grits and heavy stuff all the time because you’d just be hot,” she said with a chuckle. “And around here, they’re like, ‘Yeah, I want that,’ and I’m like, ‘Okay!’
“So that threw me a little off.”

A quick scan of the menu reveals The Big Easy’s po’ boy prices ($6-11) are very competitive with the fast food joints across the street. The restaurant will also be serving larger entrees, like seafood platters ($12-16), a kids menu and classic Southern desserts like pecan pie ($6.25) and sweet potato pie ($6).
For more info, to see more delicious food pics and stay updated with everything happening at The Big Easy’s journey follow them on Instagram and Facebook!